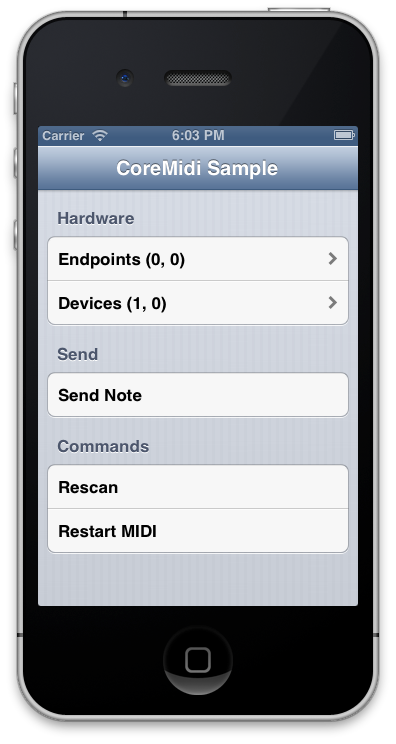 This new release of MonoTouch (and MonoMac) come with our new CoreMidi bindings. In the same spirit of the work that we did for AudioToolbox and other frameworks, we created a C# bindings that follows the .NET framework guidelines for the API.

When I started these bindings, I knew close to nothing about MIDI. It is a framework that is not exactly well documented for people new to MIDI, but posts like this helped me get these bindings sorted out.

MonoTouch/MonoMac binding resembles in many ways the object-oriented bindings that developers have created to make CoreMIDI easier to digest. At its core, it is still an object oriented framework, that happens to be exposed with a fairly hostile C interface.

Our interface surfaces the underlying object oriented system with a strongly typed C# interface. Unlike the C interface that exposes a general property querying system that applies to all midi objects (MidiDevice, MidiEndpoint, MidiEntity, MidiPort), the binding ensures that only the available properties for each main class are exposed. This is a convenient way of avoiding a trip to the docs and to google to find samples.

To save developers some pain, as I developed the binding, I documented my findings in the MonoTouch.CoreMIDI documentation and added various samples to our API docs:

Our CoreMidiSample is a tiny program that replicates most of the funcionality of the MIDI sample apps, and is an easy starting point for people that want to get started with MIDI on iOS.

Interesting CoreMidi events are turned into C# events, so you can listen to changes like this:

This means that these toolkits are not designed to have their exposed methods be invoked by multiple threads at the same time from multiple threads. The main reason is that building thread safe toolkits is both a very hard problem and can have very complicated semantics for the consumer of the toolkit.

Developers typically use multiple threads in UI applications to offload tasks that would otherwise block the user interface. The work is offloaded to a background thread that can take as long as it wants or can perform various blocking operations like disk or network operations without affecting the interactive nature of the application.

When the background code completes its work, it queues an operation to be executed on the main thread to perform any required UI updates.

The rule among toolkits is: do not access any toolkit APIs from the background thread since there is nothing in the toolkit API to defend against internal state corruption caused by multiple threads updating internals at the same time. Failure to follow this rule can lead to subtle bugs or crashes. The offending code is typically very hard to track down since the problem is timing sensitive and the corruption can vary from run to run.

With MonoTouch 5.4 we have introduced a feature that will help you track incorrect uses of UIKit from a background thread.

Starting with this release, debug builds of your application will throw a UIKitThreadAccessException exception if you try to invoke a UIKit method from a background thread.

This is a fabulous tool. It founds bugs in my own code within a few seconds of me using my own software. Sometimes the bug is right there for you to see, but do not notice the mistake.

Over time, Apple has made some of UIKit APIs thread safe. This means that there are certain APIs that can safely be used concurrently by both the main thread and background threads. Those are documented in MonoTouch's documentation

Our list is based on what Apple has publicly documented as thread safe in different forums. It is likely that more types and methods will become thread safe in the future, and when that happens, MonoTouch will will remove the particular check for debug builds for it.

By default MonoTouch is configured to perform the thread checks only on debug builds of your software. If you want to have these checks performed also during release builds, you can pass the --force-thread-check to the mtouch compiler.

You might want to disable this check for a couple of reasons. You might have a big infringing codebase that is mostly working for you now, and can not afford to go fix these bugs right away. Or you could get confirmation from Apple that it is safe to call an API from a background thread. With MonoTouch, we have opted to be conservative and go by what is documented, but it is very possible that there are some APIs that are thread safe and just have not been documented as such.

You can disable the feature for debug builds by passing the --disable-thread-check flag to the compiler, or you can do this at runtime by changing the value of UIApplication.CheckForIllegalCrossThreadCalls, like this:

Adding Your Own Checks

If are building a library that wants to enforce the same kind of checks, you should call the new UIApplication.EnsureUIThread from your code to perform these checks.

Posted on 10 Sep 2012 by Miguel de Icaza
This is a personal web page. Things said here do not represent the position of my employer.