New article on the Israeli wall.

Monday flew in-and-out of Denver; Followed by XML Edge panel yesterday in Boston, where I had a chance to meet again Margo from Sleepycat.

Next week will be twice as crazy: all of the Novell Mono Developers are descending into Boston for a whole week of meetings and working together. This is a historical event, since the team has never met before face to face (only a few of them have met).

On Friday and Saturday we are hosting an open house event for folks to come and meet with the team and learn a bit about Mono. We have now an agenda for the meeting.

Duncan shared a few links with me today Rumsfeld Fighting Technique and this. From Dare, I found a nice post from Aaron: How Stating the False Hides The True

Am in the international Open Source Conference held in Malaga in Andalucia. Andalucia and Extremadura are the two states that have adopted Gnome across the board: education and government. There are 400,000 users in these two areas (20% of the Extremadura population are Gnome users) and have around 100,000 Gnome desktops deployed.

This is a very big number of Gnome desktops deployed. This might be the largest Linux desktop deployment in the world (China will follow later with the Gnome-based JDS system next year).

This is entirely a Debian/GNOME setup, and there is a local industry that has emerged out of this: various small companies here are providing the support to the governments of Andalucia and Extremadura (Will get the name of the consortium of open source companies tomorrow, because right now I forgot).

They have developed quite a set of interesting tools: from back-porting changes to the stable version of Debian (addressing one of Debian's weaknesses) to developing tools to manage large network deployments (similar to Red Carpet's enterprise features, but for Debian) and a nifty tool to create bootable distributions and turn them into CDs that people can carry around (metadistros).

There are tons of stories floating around, and people very excited about this technology. From the kids that after doing their work in school ask the teacher for permission to use the "Guadalinux" (this is the name they use to refer to the Linux machine, based on the distribution name) to the class rooms that are now entirely quiet due to the kids playing with the "Guadalinux" systems.

Also grandmothers refer to the web as "mozilla" they pronounce it "mo-ci-yha", as in `I found in mo-ci-ya that you can do this and that'. Very interesting stuff.

During a few conversations with the various officials and engineers that work on this project, I have mentioned that they should probably should join the Gnome Foundation's Advisory Board, something that I think we should fast track. I asked the education secretary if they had any issues with Gnome, and if there was something we could fix, or improve for them, and they said `So far we have not had problems with the teachers'. A good perception.

The technical guys on the other hand had a few requests: from Evolution failing to send SMTP mails in some occasions (we should investigate this) to better integration with the braille stack in the accessibility framework (accessibility here is very important due to a fairly strong Spaniard organization called "La Once").

My friend Charles Curran from the UK Linux Users group is also in town, he is now living in Sevilla, and came to the meeting. It was very nice to see him again.

Lastly, about 30 Gnome Developers from the "Gnome Hispano" got together in the afternoon to meet and discuss. I learned that a "GUADEC Hispano" is being planned for May in Extremadura.

The Mono presentation went fairly well, I was still a bit tired from the jetlag, but it came out OK. I updated MonoDevelop from CVS, and things worked out of the box: I demoed the intellisense feature which is just a great way of developing Gtk# apps.

While jetlagged and unable to sleep, am checking out the Nemerle language. A functional language designed by Michal Moskal for the .NET Framework that works out of the box in Mono.

This compiler is self-hosting, which is fascinating. Worked out of the box on Mono 0.30

A fascinating product from Mainsoft has been released: Visual MainWin for J2EE.

This product lets you run your ASP.NET applications written in C# or VB.NET inside a J2EE application server and integrates beautifully with Visual Studio.NET. All .NET applications can also use EJBs and reference Java classes, you can see a live Flash demo of it.

Mainsoft has been using Mono's class libraries to deliver the functionality and they are regular contributors to the code base. We wish them much luck with their new product.

I will be in Madrid on Monday and Tuesday (busy all day until dinner-time).

Jon Perr who used to work for us at Ximian has launched a new web site.

Been doing good progress with anonymous methods, but last night on the plane on the way back home, I discovered a big problem with my design (I had a fairly clever way of computing the right return type in an anonymous method).

My clever hack was to hook up to the standard conversion code: anonymous methods are generated during the implicit conversion code. The problem with this approach is that it was too late to capture variables.

Am right now toying with overloading the implementation of Field expressions and LocalVariableReference expressions to handle the lifting, rather than the clever CapturedVariable expression which I was using before.

Marek has been cleaning up the compiler internals to turn our compiler into a CLS-aware compiler, now we will be able to flag CLS violation errors. His fixes includes long-standing wishlist items to refactor the interface members to become regular MemberCores (which they do now) and refactoring some of the attribute emission and gratuitous differences in constants and fields that we had in the code.

Am visiting Novell's main development offices for the next two days. If you are here and want to talk about Mono, drop me an email.

After yesterday's release of Mono 0.30 I finally had some time to look into what the guys have been up to with MonoDevelop (the port of the venerable SharpDevelop from Windows to Linux).

To my surprise, MonoDevelop is fairly advanced, and I was able to do all of my MonoDoc development on it today: 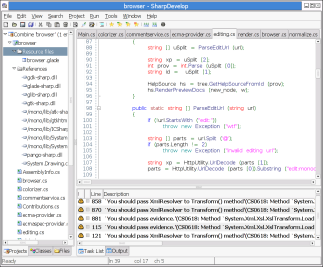 MonoDevelop with a fresh project for MonoDoc

I was improving the file format for our Index, as well as some touch ups to the collaborative framework in MonoDoc: 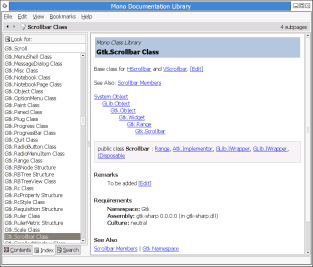 Here is what the collaborative documentation editor looks like now: 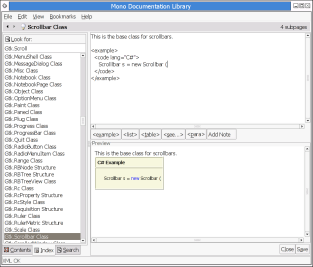 I have most of the anonymous method support written now. Now the time for debugging has come.