With Mono Beta2 I was able to get MonoDevelop to work on my Mac. 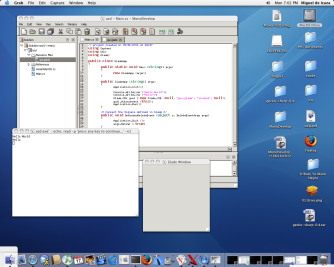 There are a few Linux-isms in there that you must fix, a quick workaround is to add the following to your $prefix/etc/mono/config file:

Then you must edit $prefix/lib/monodevelop/bin/gdl-sharp.config, this is what I have:

You still need to use GDK_USE_XFT=0 from the command line.

Of course, the real fix is to get MonoDevelop to generate those files (and fix the few incorrect hardcoded references to x11), but I will let Todd do that.

I was named one of InfoWorld's 2004 innovators: here. 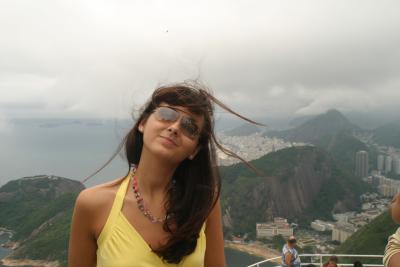 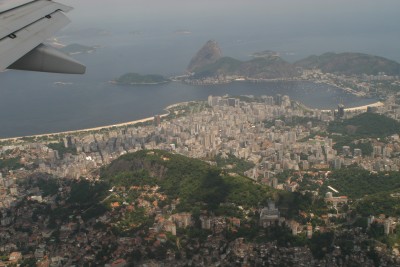 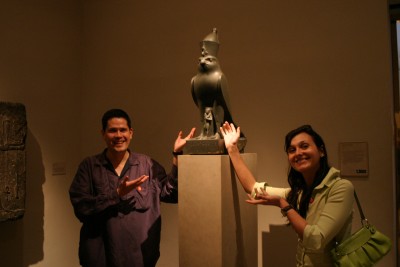 Mauricio and Laura at the Metropolitan. 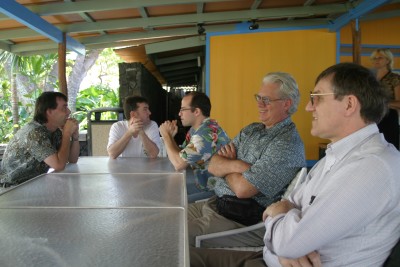 At the first day of the ECMA meeting in Hawaii. 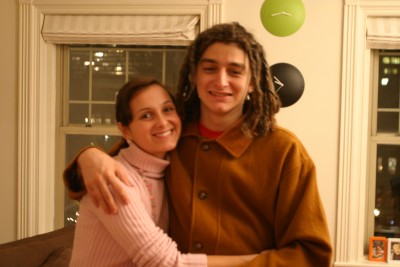 Laura and Marcelo in March.

Mark Pilgrim has a great follow up to his freedom-0 article.

Spent some time this afternoon playing with Nemerle and their latest release.

My main problem is that I find it hard to think in any other way which is not the standard programming that I have grown up to do, maybe I need a hobby programming task to do. It will have to wait until we release Mono 1.0, right now things are busy.

My personal wish: I would like a C#-like scripting language myself. Sprinkle a few perlisms, rubyisms and pythonisms in there. Drop the class carcass.

A small patch I have been playing with in my copious spare time is one to turn all unresolved method calls in C# to a dynamic code translation. So basically:

ie, notice that the type of the variable is `o'. The downside: the runtime has to transform the incoming parameters to something that matches the call, you loose the compiler safety net, and its slower. But at least you can prototype quickly ;-)

I do not like the current implementation of anonymous methods, it really does not work in the presence of nested anonymous methods, so I have gone back to the drawing board and have now a new design for this internal chunk of the compiler that am a lot happier with. As soon as the beast compiles, I will upload a new patch.

The C# compiler also gained recently a new flag: -pkg:NAME which integrates pkg-config directly into the compiler. We are making the world a better place, one command line option a day.

Andreas, Ben and Paolo have been discussing moving existing code that we implement in C to the managed world, as our JIT is in some cases as good as the C compiler and the transition from managed to unmanaged is too costly: we can now move more code into the managed world.

The old gcc exceptions mechanism that the Mono JIT used for a long time to speedup calls into the unmanaged world is gone. It was too much of a support nightmare (gcc and libc would often be out of sync, rendering the optimization useless), and instead Zoltan has cooked up some ways to improve the transition cost on x86 and SPARC.

The PowerPC port got a big boost today with various fixes checked in from Paolo; Neale continues to update the S390 port and Zoltan has checked in some fixes to support Linux on the SPARC (in addition to Solaris).

We still need to support the Itanium and the x86-64 CPUs (if you have a good recommendation about a book on these platform, please mail me) as they are important platforms for SUSE.

Lluis completed this week the Thread.Abort implementation for Mono. Our old implementation had various issues if we aborted thread while we were in unmanaged code (since there was no way to clean things up). Lluis' new implementation now shuts down things properly.

Now this might seem like a problem that few people would run into, but the reality is that it happened a lot with people using ThreadPools, ASP.NET or WebRequests since all of them triggered a call to Thread.Abort, and the side effects were ugly: from assertions in the runtime, to hangs at program exit.

This fixes the last major reliability blocker problem we had for Mono 1.0.

Dick in the meantime implemented the locking functionality for Files, a feature that some people needed and that was not really there before.

Joshua has checked in the tools to produce HTML out of Monodoc. Real men use Monodoc, but if you feel like giving up on your manhood, now you can browse uncompressed, not-as-beautiful, not-indexed classes ;-)

They are rapidly closing the last pending bugs in the MCS compiler, none of them are crucial, but we want to ship with as few bugs as possible in the compiler. At this point, we are no longer accepting large changes to the compiler (which also means that Anonymous Methods will just not make it into the 1.0 release, too bad, they were too cute).

Seth has raised some valid points on the patent problem, as it related to Mono.

A big problem with everyone raising potential patent problems with Mono is not that they are wrong in any way, but there are a few problems with it:

Now, it is hard to argue with the nay-sayers about routing around the patent for two reasons: we do not know what might be patented and valid (ie, no prior art can be found or properly articulated) and most importantly for any given topic we can engage in weeks of discussion on what-if scenarios.

We do not plan on infringing patents, and if were to infringe on patent, we will either find prior art that renders that particular claim invalid, or rewrite the code to work in a different form. We do not like software patents, but we will abide by the legal rules.

And again, remember, the software patents problem is not limited to the specific instance of Mono. Everything Seth said applies equally well to every bit of our open source stack today: do we infringe on a Microsoft patent? Do *you* know for sure you do not? Have you performed a patent search? On every possible bit?

Red Hat has chosen to adopt Java (despite the same potential problems with patents) and has decided that it is in their interest not to use C#/Mono. Like Red Hat's Seth states: this is self inflicted damage on their part, and they will not be able to ship any of our leading edge GPL code (Simias, iFolder, F-Spot or any of our future development tools).

Red Hat could either stop whining, and have their developers work in Mono and use Mono, and help us fight bogus patents or route around them, or they can keep posting to their blogs more fear-mongering.

Does your foe have a patent to it? Or someone that can be acquired by your foe?

Most people operate in Stop Energy mode, so I typically ignore them, and keep moving.

A small story I like to tell people: when I started writing Gnumeric, I was very afraid of one thing: the computational engine. How do we recalculate the value of cells when a change happens? How do we make this perform well? How do we do iterative computations? How do you resolve recursive references?

All of those problems were fairly scary, and I did not have an answer to them. I looked at all the source code I could find for spreadsheets around that time, and none of it did even a remotely good job: it was all pretty amateur, and none of it really did anything remotely close to what commercial software did.

I started work on Gnumeric nonetheless, figuring `When the time comes, I will face that problem', and spent the next three months making sure that Gnumeric was visually pleasant, that it looked like Excel, and that the "feel" was right. I tried to implement computations trivially during that time in a couple hour hack and that failed miserably.

By the third month, I decided I would not touch a computer until I figured out an algorithm for doing these computations, I took a pencil and a notebook and went to write down the steps. Surprisingly after a few hours of work I had something that looked correct.

That same day I implemented the computational engine with the features I wanted and it just worked!

What I like about this story, is that I could have given up at any point since there was a large problem ahead of me: a problem I had no answers to. And I see this with many free software developers, students and even in normal social situations: people stop doing things because they see a big problem ahead of them that they can not possibly conceive working around. My advise to every young programmer is to start writing code and delay addressing imaginary problems until they become real.

The Mono team (both the community and the Novell employees working on it) is pretty much such a group: a group solving problems, and moving forward.

Interview with a soldier

Ran into this interview this morning. From the Sacramento Bee.

Incidentally, watched For of War this week, McNamara at some point says `We need to win the hearts and minds of the Vietnamese people'.

Kristian Rietveld picked up on the challenge to write a WHIRL to CIL compiler. This means that any languages supported by the GCC WHIRL fork (C, C++ and the two Fortrans) could be used as compiler front-ends.

Kris has a sample of his work so far: a small C program translated to WHIRL (gcc), then to CIL (he had to write his own WHIRL reader.

A sweet interview with Nat on the Novell Linux Desktop.

Man, I spent some quality time going over the JBoss soap opera. I always felt things were not quite right when I was reading TheServerSide.

Not everyone gets the importance of free software at once. To me the point of no return came when I was using non-Intel Linux machines, and could not run any of the new proprietary Linux software on the Alpha host we had.

The Movable Type licensing term changes have done the same for a new generation. Dive into Mark's Freedom 0 article rings true. The same kind of feeling we had when we started the Gnome project, we decided to not look away with something that was `free enough'.

After five months of delays, Massimiliano Mantione has joined the Novell Mono team. His focus will be on compiler optimizations.

As part of his interview process (which lasted a month), Massimiliano completed the arrays bounds check elimination feature for the JIT compiler. Now that he is part of the Novell staff he is redoing his work to match the current VM.

Plenty of good feedback from the Mono Beta 1. Duncan has been taking care of the packaging things, and as of today we are shipping zip files with all the packages for those of you who did not want to manually download all of the packages one by one.

Novell has just open sourced the Evolution connector to Exchange. The code is available on our ftp server or you can browse CVS.

Congratulations to everyone involved!

Was reading Robert Fisk's latest article and googled for the keywords. Here is the shocking video.

Some cartoons, and a couple of interesting sites: Talking Points Memo and the Media Matters web site.