Been following some of the discussion around Action Script 3 on the tweetosphere. Here are three implementations of the same model from Joa Ebert (he works on a fabulous Flash product for doing music that I absolutely love).

Lately a lot of discussion had the ActionScript language as its focus. People start complaining about complex language features but I think they are great because the end user will benefit from that. Yesterday evening I had my very first test with Silverlight — and I am really impressed.

It took me a short amount of time to port the strange attractor to Silverlight. I agree that this is may be not a fair comparison because I know C# already but have a look at the source code. I make heavy use of type inference and the Matrix4x4 class has the plus, multiply and array-index operator overloaded. The code is more readable. And besides: it executes really fast. Faster than my heavily optimized ActionScript version. Imagine I would write var bleh = 1.0 in ActionScript. Framerate would drop to something like zero. But this is sad since there is no reason for me to write var bleh: Number = 1.0. A modern compiler should be able to figure this out. haXe can do it, C# can do it, OCaml can do it and lots of others as well.

Remember: This was my first time using Silverlight. To achieve the same result with Flash you have to be kind of an expert in strange player and language “features”. Now tell me again that the end user will not benefit.

Here are the three implementations:

C# 4.0 introduces the dynamic type into the language. The language will ship in Visual Studio 2010.

Once a variable is declared as having type dynamic, operations on these value are not done or verified at compile time, but instead happen entirely at runtime.

Marek has been working on Mono's C# 4 implementation and it is coming along nicely. Zoltan wrote a small "PInvoke" dynamic class using Mono's C# compiler that allows you to call C library methods like this:

In this case "printf" is resolved at runtime to be a method in the "libc" library. This is similar to Python's ctype library in about 70 lines of C# leveraging LINQ Expression, the Dynamic Language Runtime and C#'s dynamic:

You can download the C# 4.0 Future document for details.

Mono's C# 4 compiler so far implements optional parameters, named parameters, has support for the new covariant and contravariant specifiers and the dynamic keyword is evolving very quickly (as shown by the example above).

If you want to test drive Mono's C# 4.0 compiler, you need Mono from Git and you must pass the "--enable-profile4=yes" argument. Once you do this, the new compiler will be installed as dmcs on your system.

Nikhil has a nice sample that shows JSon integrated directly into C#.

Noah Hart did a line-by-line port of Sqlite to C# and has uploaded the code to code.google.com/p/csharp-sqlite.

The frequently asked questions on the web site talks about performance (it is about 5 times slower than native code, but still, it can do 1.5 million selects per second, 300k inserts per second).

Still, not bad for a line-by-line port; Folks on the #mono channel on irc.gnome.org a couple of days ago were commenting on the possible ways of tuning it up by not forcing the C way where the C# way would work just fine.

The potential for this library is huge. It could be used for ASP.NET servers running in medium trust mode, or it could be used by Silverlight applications.

It seems like Tim Anderson is attempting to remove all the P/Invokes from it to make it run on Silverlight (the P/Invokes are mostly used for doing file-level locking; Again part of the line-by-line history of it).

Antonio Cangiano from IBM compares the performance of the recently released IronRuby with Ruby 1.8 and 1.9 on Windows.

On his blog post he looks at both the micro benchmarks and overall benchmarks. The summarized results: 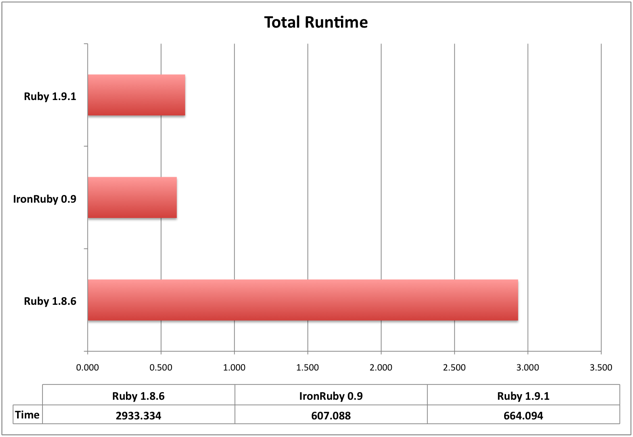 IronRuby went from being much slower than Ruby MRI to considerably faster across nearly all the tests. That’s major progress for sure, and the team behind the project deserves mad props for it.

One final warning before we get too excited here. IronRuby is not faster than Ruby 1.9.1 at this stage. Don’t let that first chart mislead you. While it’s faster in certain tests, it’s also slower is many others. Currently, it’s situated between Ruby 1.8.6 and Ruby 1.9.1, but much closer to the latter. The reason why this chart is misleading is that it doesn’t take into account any tests that timed out, and several of such timeouts were caused by IronRuby (more than those caused by Ruby 1.9.1). If you were to add, say, 300 seconds to the total, for each timeout for the two implementations, you’d quickly see that Ruby 1.9.1 still has the edge. The second chart that compares macro-benchmarks does a better job at realistically showing how IronRuby sits between Ruby 1.8.6 and Ruby 1.9.1 from a performance standpoint. If you were to plot every single benchmark on a chart, you’d find a similar outcomes for a large percentage of the tests.

Whether it’s faster than Ruby 1.9 or not, now that good performances are staring to show up, it’s easier to see IronRuby delivering on it’s goal of becoming the main implementation choice for those who both develop and deploy on Windows. This, paired with the .NET and possible Visual Studio integration, the great tools available to .NET developers, and the ability to execute Ruby code in the browser client-side thanks to projects like Silverlight/Moonlight and Gestalt, make the project all the more interesting. 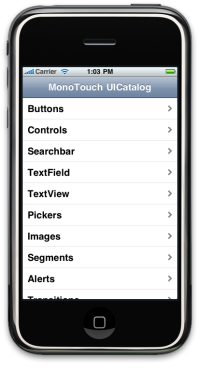 We have reached feature completion status for our MonoTouch project and we are looking for some adventurous iPhone developers that might be interested in trying out Mono for the iPhone and the MonoTouch APIs (A C# API for building Cocoa applications).

We are doing a closed preview to gather feedback on MonoTouch, if you would like to be part of this preview/beta, please fill out the signup form.

You can browse the source code for the sample widget catalog built using the MonoTouch.UIKit .NET binding to Cocoa's UIKit.

We have reached feature completion status for our MonoTouch project and we are looking for some adventurous iPhone developers that might be interested in trying out Mono for the iPhone and the MonoTouch APIs (A C# API for building Cocoa applications).

We are doing a closed preview to gather feedback on MonoTouch, if you would like to be part of this preview/beta, please fill out the signup form.

You can browse the source code for the sample widget catalog built using the MonoTouch.UIKit .NET binding to Cocoa's UIKit.

Bridging C# and C++ on Unix

Unlike Microsoft's .NET, Mono lacks a C++ compiler that can generate CIL code or mixed CIL/native code. This makes it harder for C++ codebases to integrate with C# code.

One solution to the problem is to write C wrappers for every C++ method and then use P/Invoke to call into each wrapper. Dealing with virtual methods then becomes challenging.

Andreia Gaita explains on Binding C++ APIs a technique that can be used to bridge the C++ and C# worlds using Mono's built-in support for COM objects.