I am a fan of Dropbox. It is a great tool, a great product, and clearly they have a passionate team over at Dropbox building the product.

Dropbox recently announced an update to its security terms of service in which they announced that they would provide the government with your decrypted files if requested to do so.

This is not my problem with Dropbox.

My problem is that for as long as I have tried to figure out, Dropbox made some bold claims about how your files were encrypted and how nobody had access to them, with statements like:

But anyone that tried to look further came out empty handed. There really are no more details on what procedures Dropbox has in place or how they implement the crypto to prevent unauthorized access to your files. We all had to just take them at their word.

This wishy-washy statement always made me felt uneasy.

But this announcement that they are able to decrypt the files on behalf of the government contradicts their prior public statements. They claim that Dropbox employees aren't able to access user files.

If companies with a very strict set of security policies and procedures like Google have had problems with employees that abused their privileges, one has to wonder what can happen at a startup like Dropbox where the security perimeter and the policies are likely going to be orders of magnitude laxer.

Dropbox needs to recruit a neutral third-party to vouch for their security procedures and their security stack that surrounds users' files and privacy. If they are not up to their own marketed statements, they need to clearly specify where their service falls short and what are the potential security breaches that

Unless Dropbox can prove that algorithmically they can protect your keys and only you can get access to your files, they need to revisit their public statements and explicitly state that Dropbox storage should be considered semi-public and not try to sell us snake oil.

Save the Date: Monospace Conferece in Boston

The dates for the MonoSpace conference have been announced: July 23rd to 25th, 2011. The event will take place at the Microsoft NERD Center.

The organizers have just made a call for speakers. If you have an interesting topic to discuss, please submit a talk, we would love to hear from you.

Save the Date: Monospace Conferece in Boston

The dates for the MonoSpace conference have been announced: July 23rd to 25th, 2011. The event will take place at the Microsoft NERD Center.

The organizers have just made a call for speakers. If you have an interesting topic to discuss, please submit a talk, we would love to hear from you.

Today we are happy to release Mono for Android 1.0 as well as MonoTouch 4.0.

Both products allow you to use the C# language to write applications that run on Android and iOS devices.

Both products are based on the latest Mono 2.10 core. The Parallel Frameworks can be used to write more elegant multi-threaded code across all devices, and automatically takes advantage of multiple cores available on the iPad2 and Xoom devices. The C# 4.0 is now the default as well as the .NET 4.0 APIs. 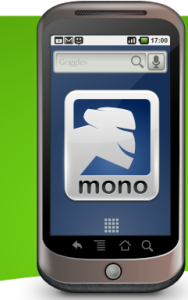 Mono for Android debuts today after almost a year worth of development.

Perhaps the most important lesson that we got from MonoTouch's success was that we had to provide a completely enabled platform. What we mean by this is that we needed to provide a complete set of tools that would assist developers from creating their first Android application, to distributing the application to the market place, to guides, tutorials, API documentation and samples.

Mono for Android can be used from either Visual Studio Professional 2010 for Windows users, or using MonoDevelop on the Mac. 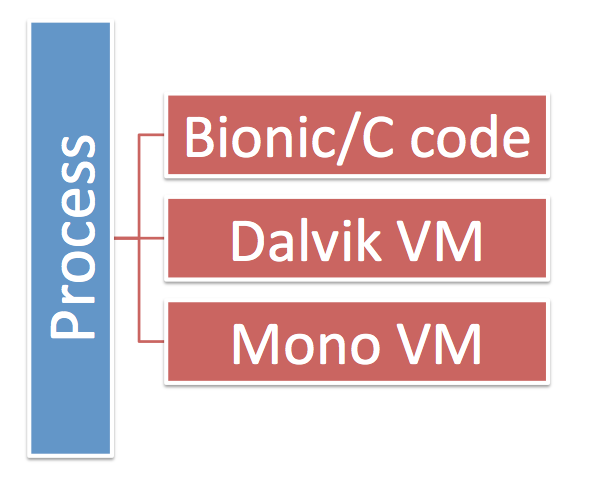 This is necessary since code running in Dalvik provides the user interface elements for Android as well as the hosting and activation features for applications on Android.

The Mono for Android API is made up of the following components: Core .NET APIs, Android.* APIs, OpenGL APIs and Java bridge APIs.

Let us start with the most interesting one: Android.* APIs. These are basically a 1:1 mapping to the native Java Android APIs but they have been C#-ified, for example, you will find C# properties instead of set/get method calls, and you will use C# events with complete lambda support (with variables being automatically captured) instead of Java inner classes. This means that while in Java you would write something like:

In addition to the UI APIs, there are some 57 Android.* namespaces bound that provide access to various Android features like telephony, database, device, speech, testing and many other services.

In what is becoming the standard in the Mono world, OpenGL is exposed through the brilliant OpenTK API. OpenTK is a strongly typed, Framework Design Guidelines-abiding binding of OpenGL. The benefit is that both Visual Studio and MonoDevelop can provide intellisense hints as you develop for the possible parameters, values and their meaning without having to look up the documentation every time.

Finally, for the sake of interoperability with the native platform, we exposed many types from the Java.* namespaces (31 so far) that you might need if you are interoperating with third party libraries that might require an instance of one of those Java.* types (for example, a crypto stack might want you to provide a Javax.Crypto.Cipher instance. We got you covered.

This means that developers using Mono on Android have complete access to System.Reflection.Emit. This in turn means that generics-heavy code like F# work on Android as do dynamic languages powered by the Dynamic Language Runtime like IronPython, IronRuby and IronJS.

And of course, you can also use our own C# Compiler as a Service

Now, although those languages can run on Mono for Android, we do not currently have templates for them. The Ruby and Python support suffer due to Android limitations. The Dalvik virtual needs to know in advance which classes you customize, and since it is not really possible to know this with a dynamic language, the use of Iron* languages is limited in that they cant subclass Android classes. But they can still call into Android APIs and subclass as much .NET class libraries as they want.

MonoTouch and MonoDroid share a common runtime, a common set of class libraries, but each provides different user interface and device specific APIs.

For example, this code takes advantage of iOS's UINavigationController and animates the transition to a new state in response to a user action:

This is an equivalent version for Mono for Android:

We chose to not follow the Java write-once-run-anywhere approach for user interfaces and instead expose every single bit of native functionality to C# developers.

We felt that this was necessary since the iOS and Android programming models are so different. We also wanted to make sure that everything that is possible to do with the native APIs on each OS continues to be possible while using Mono.

For instance, if you want to use CoreAnimation to drive your user interactions, you should be able to leverage every single bit of it, without being forced into a common denominator with Android where nothing similar to this is available.

Craig Dunn, one of the authors of the MonoTouch Programming Book, has written a nice Mosetta Stone document that compares side-by-side some of the key UI differences across platforms.

He also has written the Restaurant Guide Sample which sports a unique user interface for Android, iOS and Windows Phone 7: 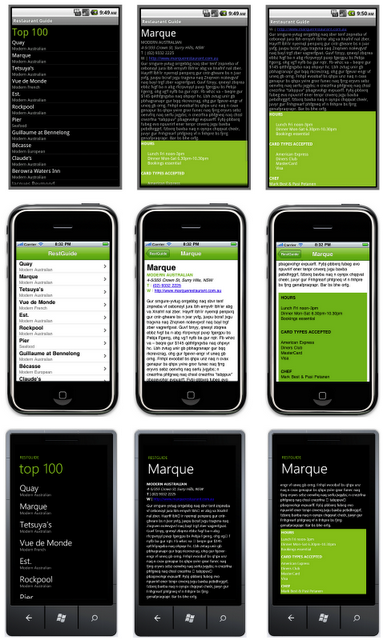 You can take a look at this cross platform sample from GitHub.

Split your Presentation from your Engine

Faced with the diversity of platforms to support, both mobile and desktop, this is a good time to design, refactor and prepare your code for this new era.

Today developers can use C# to target various UIs:

To give your code the most broad reach, you should consider splitting your backend code from your presentation code. This can be done by putting reusable code in shared libraries (for example, REST clients) and shared business logic on its own libraries.

By splitting your presentation code from your business logic code for your application, not only you gain the ability to create native experiences in each platform, you also get a chance to test your business logic/shared libraries more easily.

In Mono for Android when you build an application for distribution, we embed the Mono runtime with your application. This is necessary so your application is entirely self-contained and does not take any external dependencies.

Mono for Android uses the Mono Linker to ensure that only the bits of Mono that you actually use end up in your package and that you do not pay a high tax for just using a handful of functions.

For example, if you want to just use a method from XElement, you would only pay the price for using this class and any of its dependencies. But you would not end up bringing the entire System.XML stack: you only pay for what you use.

During development a different approach is used: the Mono runtime is installed on your emulator or test device as a shared runtime. This minimizes both the build and deploy times.

Start with our documentation portal, there you will find our Installation Guide, a tutorial for your first C# Android application, our tutorials (many ported from their Java equivalents) and our How-To Guides and a large collection of sample programs.

You can also explore the documentation for the Mono for Android API in a convenient to remember url: docs.mono-android.net.

The first book of Mono for Android will be available on July 12th. In the meantime, we have created many tutorials and guides that will help you go

I also strongly suggest those interested in parallel programming to check out the Patterns for Parallel Programming: Understanding and Applying Parallel Patterns with the .NET Framework 4. This is a free PDF, and is a must-read for anyone building multi-core applications.

Mono for Android would not have been possible without the hard work of the MonoDroid team at Novell. The team worked around the clock for almost a year creating this amazing product.

The team was backed up by the Mono core team that helped us get C# 4.0 out, WCF, the linker, the LLVM support, improve the VM, extend the MonoDevelop IDE, scale Mono, improve our threadpool, support OpenTK, implement the Parallel Frameworks, ship dozens of betas for MonoDevelop, Mono and Mono for Android.