I wanted to share three tricks that I use a lot in Xamarin Studio/MonoDevelop.

Xamarin Studio's code completion for members of an object defaults to showing all the members sorted by name.

But if you press Control-space, it toggles the rendering and organizes the results. For example, for this object of type UIWindow, it first lists the methods available for UIWindow sorted by name, and then the cluster for its base class UIView:

This is what happens if you scroll to the end of the UIWindow members:

Use the Command-. shortcut to activate the universal search, once you do this and start typing it will find matches for both members and types in your solution, as well as IDE commands and the option to perform a full text search: 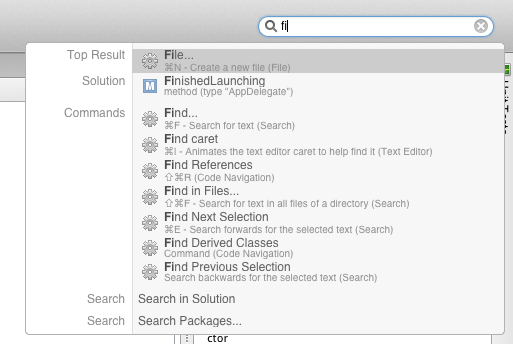 This is a feature that we took from Emacs's Dynamic Abbrevs.

If you type Control-/ when you type some text, the editor will try to complete the text you are typing based on strings found in your project that start with the same prefix.

The last couple of years have been good to C# and .NET, in particular in the mobile space.

While we started just with a runtime and some basic bindings to Android and iOS back in 2009, we have now grown to provide a comprehensive development stack: from the runtime, to complete access to native APIs, to designers and IDEs and to a process to continuously deliver polish to our users.

Our solution is based on a blend of C# and .NET as well as bindings to the native platform, giving users a spectrum of tools they can use to easily target multiple platforms without sacrificing quality or performance.

As the industry matured, our users found themselves solving the same kinds of problems over and over. In particular, many problems related to targeting multiple platforms at once (Android, iOS, Mac, WinPhone, WinRT and Windows).

By the end of last year we had identified five areas where we could provide solutions for our users. We could deliver a common framework for developers, and our users could focus on the problem they are trying to solve.

These are the five themes that we identified.

Almost a year later, we have now delivered four out of the five pillars.

With Xamarin 3.0 we introduced Xamarin.Forms, which is a cross-platform UI toolkit that allows developers to use a single API to target Android, iOS and WinPhone.

So you do not have to take sides on the debate over 100% native vs 100% cross-platform.

Many developers also want to use HTML and Javascript for parts of their application, but they do not want to do everything manually. So we also launched support for the Razor view engine in our products.

Gaming and 2D visualizations are an important part of applications that are being built on mobile platforms.

We productized the Cocos2D API for C#. While it is a great library for building 2D games -and many developers build their entire experiences entirely with this API- we have also extended it to allow developers to spice up an existing native application.

We launched it this month: CocosSharp.

While originally our goal was to bring Mono's System.Data across multiple platforms (and we might still bring this as well), Microsoft released a cross-platform SQLite binding with the same requirements that we had: NuGet and PCL.

While Microsoft was focused on the Windows platforms, they open sourced the effort, and we contributed the Android and iOS ports.

This is what powers Azure's offline/sync APIs for C#.

In the meantime, there are a couple of other efforts that have also gained traction: Eric Sink's SQLite.Raw and Frank Krueger's sqlite-net which provides a higher-level ORM interface.

There is no question that developers love Couchbase. A lightweight NoSQL database that supports data synchronization via Sync gateways and Couchbase servers.

While Couchbase used to offer native Android and iOS APIs and you could use those, the APIs were different, since each API was modeled/designed for each platform.

Instead of writing an abstraction to isolate those APIs (which would have been just too hard), we decided to port the Java implementation entirely to C#.

The result is Couchbase Lite for .NET. We co-announced this development with Couchbase back in May.

Since we did the initial work to bootstrap the effort, Couchbase has taken over the maintenance and future development duties of the library and they are now keeping it up-to-date.

While this is not yet a PCL/NuGet, work is in progress to make this happen.

Once we complete this work, you can expect System.Drawing to be available across the board as a NuGet/PCL library.

If you can not wait, you can get your hands today on the Mac/iOS version from Mono's repository.

We are now working with our users to improve these APIs. But we wont stop at the API work, we are also adding IDE support to both Xamarin Studio and Visual Studio.