My colleague Jason Smith has shared his views on what developers should use when trying to share code between projects. Should you go with a Shared Project or a Portable Class Library (PCL) in the world of Xamarin.Forms?

He hastily concludes that you should go with PCLs (pronounced Pickles).

For me, the PCL is just too cumbersome for most uses. It is like using a canon to kill a fly. It imposes too many limitations (limited API surface), forces you to jump through hoops to achieve some very basic tasks.

PCLs when paired with Nugets are unmatched. Frameworks and library authors should continue to deliver these, because they have a low adoption barrier and in general bring smiles and delight to their users.

But for application developers, I stand firmly on the opposite side of Jason.

I am a fan of simplicity. The simpler the technology, the easier it is for you to change things. And when you are building mobile applications chances are, you will want to make sweeping changes, make changes continously and these are just not compatible with the higher bar required by PCLs.

Plugging a platform specific feature does not to use an #if block, all you have to do is isolate the functioanlity into a single method, and have each platform that consumes the code implement that one method. This elegant idea is the same elegant idea that makes the Linux kernel source code such a pleasure to use - specific features are plugged, not #ifdefed.

If you are an application developer, go with Shared Projects for your shared code. And now that we support this for F#, there is no reason to not adopt them.

Back in 2008, I wrote about getline.cs, a single-file command line editor for shell application. It included Emacs key bindings, history, customizable completion and incremental search. It is equivalent to GNU's readline library, except it is implemented in a single C# file.

I recently updated getline.cs to add a popup-based completion and C# heuristics for when to automatically trigger code completion. This is what it looks like when using in Mono's C# REPL in the command line: 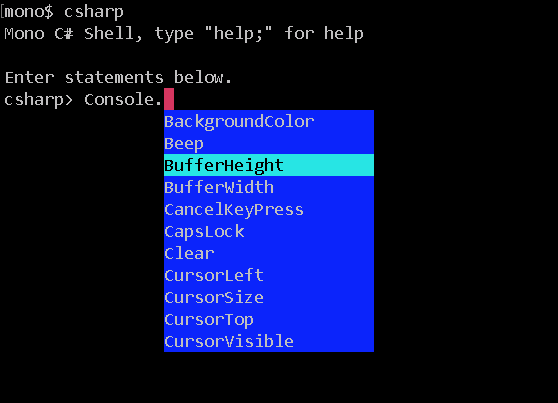