Last night Zoltan Varga checked-in his last patches that complete the Mono JIT port to the SPARC (with Solaris). The system passes all of our regression tests, and bootstraps Mono from scratch.

We had support for SPARC v8 and v9 as an interpreter, and some early work had been started by Mark last year. Zoltan picked up on the job on the first week of February and got the port done in marginally more than a month.

With three JIT ports now (1 CISC, 2 RISC), most of the portability issues on the JIT must have been taken care of.

Edd on the Mono Meeting

Edd has written a fantastic article on the Mono Meeting. The Slashdot peanut gallery has initiated a flame-fest over the comment that to me C is dead.

The Gnome Notifier is definitely not a production system, it is a toy that illustrates a simple way of sending notifications to the system (some other people have discussed this before. Ideally a more complete system would have a history mechanism, and a way of browsing/answering previous messages.

For example, the most annoying problem I have with GAIM (My Instant Messenger in GNOME) is that whenever there is an interaction (you got disconnected from a remote site, or someone added you to their buddy list) a pop-up window shows up. This pop-up window shows up in the middle of your typing and grabs the focus. If you are writing code, writing an e-mail or doing any other form of typing, you are likely going to accept whatever is the default button by mistake, as you press the spacebar. Not to mention that you will have to re-type a few letters.

What I would like is for someone to integrate that into the Panel in some form, patch Gaim and all the other offenders, and have a way of getting back all the pending notifications.

I believe strongly that the Gnome Human Interface Guidelines should incorporate notification patterns and practies in their document, the following comes from the UI talk at the Microsoft PDC where there is a nice classification of user interaction: 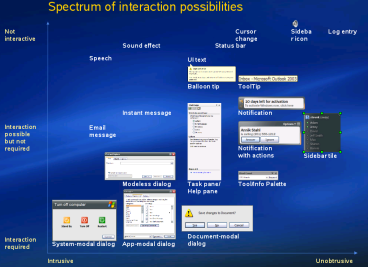 Spectrum of Interaction Possibilities, from the PDC