Associated Press: Beating the last year record of 375 billion dollars, this year the projected deficit is going to be 422 billion.

Economic girlie men with a twist.

Update 2: Am sorry for updating this so many times, but I could not help but make a reflection. The `do not be a girlie man' defense of economic and tax policies sounds as idiotic to me as the defense of the internet boom business models. I can not help but think back at how a few people warned of the coming catastrophe and people laughed at those who were wondering where the profits were and how those things would be sustained.

It seems that the current economic and tax policies are rooted not on careful economic research but in punch lines. That bubble is going to burst.

I will be going to Barcelona on Saturday for the Novell Brainshare conference.

Update: The location is: UOC, Avgda. Drassanes, 3-5, Barcelona at 7pm. I will try to drag Nat Friedman along. 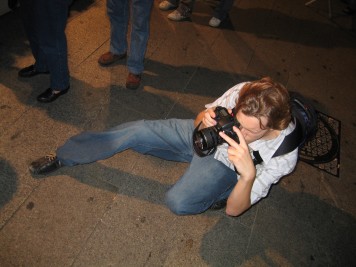 Guardian: On Sunday, the military placed Ms Fahima in detention without trial using a law applied to thousands of Palestinians over the past four years of intifada but rarely to Israelis.