Jon has authored SharpMusique: a port of PyMusique to C# on Gtk#. 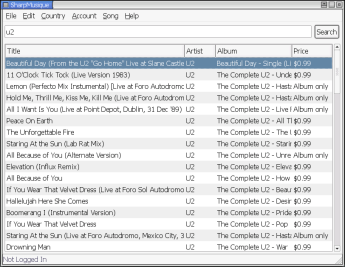 SharpMusique is a very useful tool, but in addition Jon is shipping a C# binding ("VLC.cs") to the VideoLan library. VideoLan is a cross platform media framework, so this is quite convenient for folks developing cross-plaform media apps with Mono.

The only mistake of the afternoon was allowing Nat to test drive SharpMusique while I was logged in.

An interview I did while in Turkey: here.

Scott Ritter, the weapons inspector that predicted that there were no weapons of mass destruction in Iraq has written a new article Sleepwaling to Disaster in Iran.

The day after my return from Beirut, Duncan and myself took a cab back home late at night. The cab driver was a Lebanese which overheard our conversation and suggested the book Asad of Syria: The Struggle for the Middle East.

Someone had recommended this book before. So far, the book has been excellent, non-stop reading. I am giving it five stars in Amazon.

Amazon keeps findinding ways of emptying my wallet. First the free-delivery service, and now they have added a list of books referenced by any given book. A feature that I have been properly abusing.