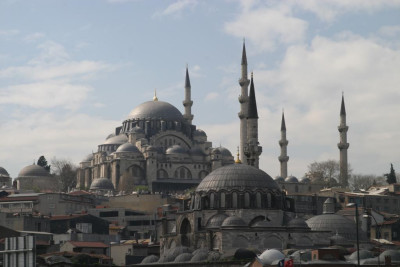 Had a great time in Istanbul, my hotel was conveniently located in a street in Beyoglu: packed with restaurants, coffee shops and tons of people walking up and down the street.

As usual, my plane got delayed and canceled so I lost my first day in Istanbul. Instead, I got to enjoy everything that the CDG airport has to offer: from toilets to airport food and ten euro per hour wireless internet access.

Currency in Turkey used to be measured in millions, but they have now removed six zeros from their currency: 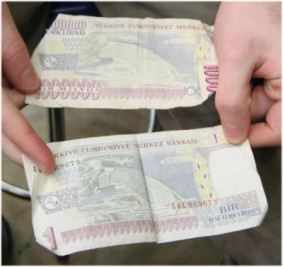 My first meal was here: 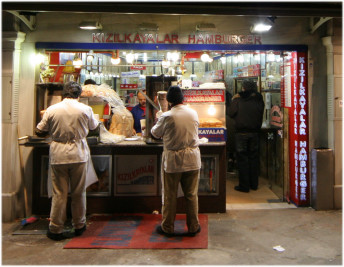 Peter from Linux Tecnolojic, Pinar and Gamze from Novell Turkey:

Customs in Istanbul are surprisingly similar to those in Mexico City, to the smallest details. The most interesting one is that people put lime juice in most things.

My talk on Saturday was about Gnome and Mono. I showed a couple of applications at the end of my presentation, and I regret forgetting about showing Beagle. It would have been a nice demo.

While jetlagged one night, I finally figured out how to make the IBM T42p go into standby mode and recover from it without leaving the screen blank. To do this, just add "acpi_sleep=s3_bios" to your kernel command line.

Then the `powersave --standby' command will work. After the first time you standby, the powersave daemon seems to get stuck waiting for some helper process to finish, and wont work again. So am using a miggy-script of magic that does something like `powersaved restart', followed by some magic sleep command, followed by the standby command.

The last day of the conference we had a big dinner with the Gnome Turkey group, here are some of the members: 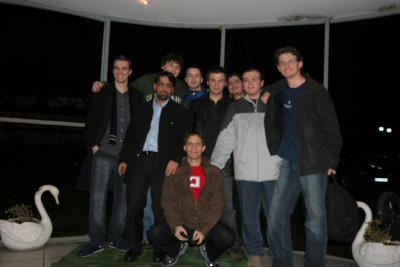 On Sunday we went for a walk: Enver and Sezgin were my guides. Just like Mexico, they sell very cheap freshly squeezed orange juice on the streets: 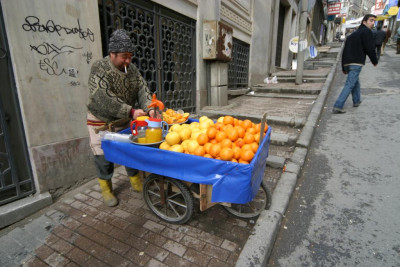 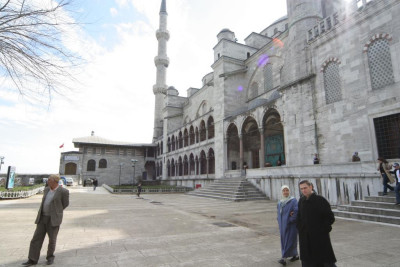 Hagia Sophia, the church turned mosque, just in front of it: 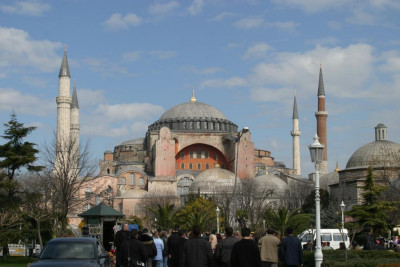 Next to those two mosques, visitors can visit the underground roman cisterns: 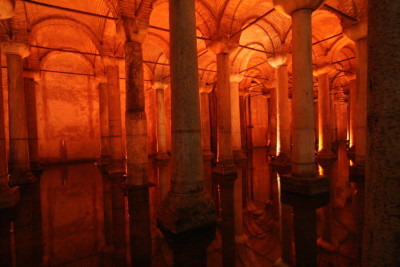 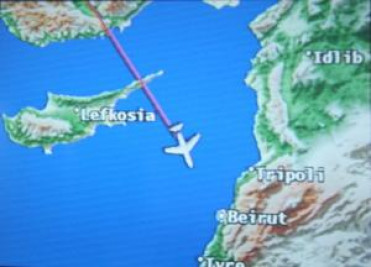 I arrived last afternoon to Beirut from Istanbul, a very short flight, only one hour and thirty minutes. I went straight to sleep as the couple of days that I spent on Istanbul were intense. 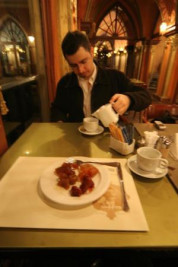 Later in the afternoon, Hisham from the Lebanese Linux Users Group picked me up and we went for a walk of the city. The stores that you find in Beirut are very much like those you would see in any other major city: Body Shop, Starbucks, McDonalds, Zara, KFC and even a Buddha Bar; All the big names car dealerships, hotels and so on. The only difference is that you can only read half the signs.

They sell a thing called "White coffee" which I enjoyed very much, and it is just transparent water with some flower-like flavor. 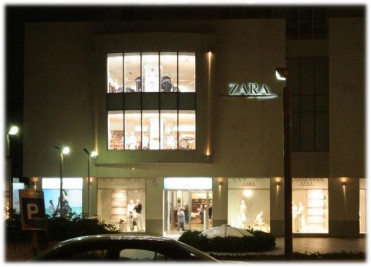 I woke up very late this morning, recovering from the jetlag. In the reception, people were watching the pro-Syrian gathering in down town Beirut, which looked huge, and clearly was the place-to-be today. Now I can have a better story to tell next time the question of `Where were you the day of the pro-Syrian demostration in Beirut?' pops. 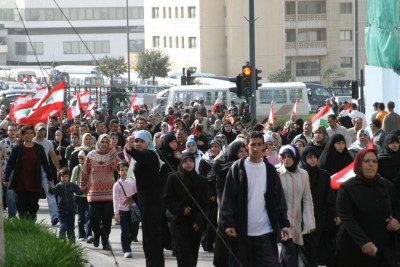 Walking to the Etoile.

The taxi dropped me off about a kilometer away from Place de L'Etoile where the event was happening. Most roads were closed to cars.

Just like in Turkey, people are incredibly friendly, and they would try very hard to speak to me in either english or french. One of those guys volunteered to translate the signs and what people were saying over the loud speakers, and hanged out with me until the end of the day. Just like in Barcelona one in every five people you meet is a Jordi, in Beirut the same happens with the Mohammeds. I have met three so far.

Hizbolah called for today's protest, it was a protest in support of Syria and against resolution 1559. Hizbolah is a popular resistance movement that emerged in Lebanon as a reaction to the Israeli invasion of 1982. Although Israel withdrew from Beirut, the army remained in occupation of the south of the country. The resistance eventually drove the Israeli army out of Lebanon in the year 2000.

Hizbolah grew out as a resistance movement, but today is also a political player and has a few seats on congress. 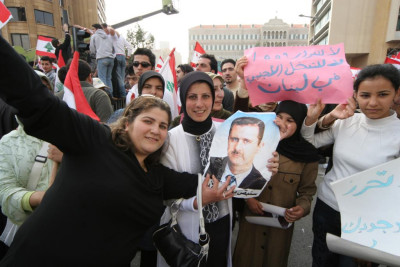 People in the city told me that the 1559 not only called for Syria to back out, but also for the Hizbolah militia to be disarmed. Me, being scared of anything remotely looking like a weapon could not agree more, but let me explain.

Although the 1982 invasion was aimed at neutralizing the growing strength of the PLO as a political force instead of conquering Lebanon, those at the protest today do not necessarily see it that way. They repeatedly said that Hizbolah keeps Israel away from Lebanon (Here is the Reuters coverage).

Syria entered Lebanon for the first time invited by the then president of Lebanon and by a mandate of the Arab League, to stop the civil war that had erupted in Beirut. They got themselves tangled into the civil war, and were basically powerless to stop the invasion in 1982. They have remained ever since and its the source of the current split opinion. 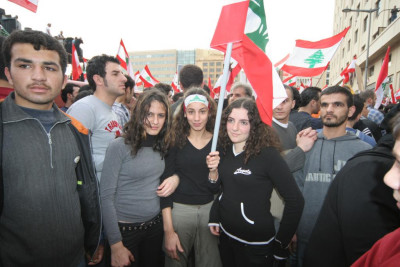 The protest was like any other protest I have been to; you could smell some marijuana being burned, people with tons of signs everywhere, fairly packed, difficult to navigate and people chanting slogans. All I could understand was `Yala, Yala', which roughly means `Go go'.

I could not reach the center. All of a sudden, it turns out that just next to where I was standing they were setting up the podium for the main speaker. In a building barely twenty meters away. First soldering it, and covering it up with a white blanket of sorts: 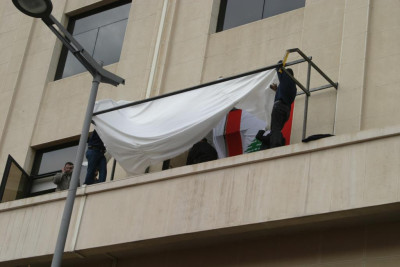 Half an hour later the main speaker showed up: 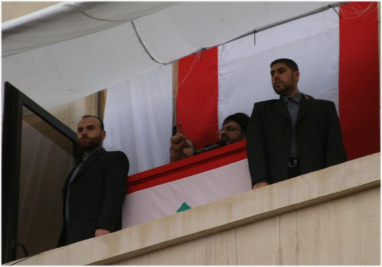 After the event was over, I was invited to dinner and to play pool. I had some tasty thing that is very much like a Taco al Pastor in Mexico, but they use bread instead of tortillas. Not only they did not let me pay anything (at the pool place, the dinner, the taxis), they also paid for my taxi to return to my hotel. I also got an invitation to see my now friend Mohammed in the south of Lebanon once Maria arrives: 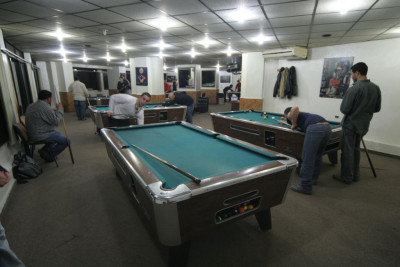 Like in Turkey, the way to cross the street is to wait for a space between the cars and to jump into the street, hoping that the car will stop. Only later in the day I noticed that this was not like Mexico, where people do this when they see no cars coming. In Beirut there are no traffic lights (or at least I have not seen any so far).

This pricing picture at the pool place probably gives you a taste of the city: 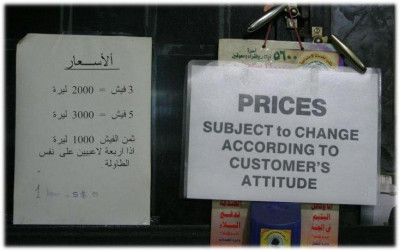 Maria's flight to Beirut is delayed; She will be showing up later in the afternoon. This means that my Gnome/Mono presentation will have a hard-stop at 6:30pm.

Currently F-Spot nor ImageMagick on my machine have support for RAW images. I made the mistake of shooting about 20% of my photos with that, so am going to have to wait until I get back to figure out how to decode them.