Mexico remains without an elected president. In the last few days a number of problems have surfaced in the election. 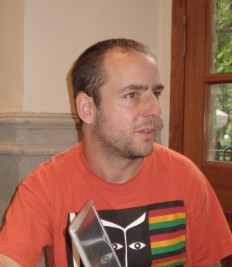 He found that the results did not match. This is bad either because someone cheated, or because the nation, as a whole can not count. There are arithmetic errors of this kind in nearly half the voting booths in the country.

The tampering, we believe, happens when the votes registered on the official documents (Actas) does not match the votes that were counted at the particular voting booth.

Now, without being a witness to the actual recounts, there are a number of statistical anomalies that can pinpoint the tampering.

Update: Am removing this data, as it seems incorrect (the over-participation), see the next web page for the details.

A list is available here. Democracy in Mexico is very inclusive.

Each colored line represent the votes cast for each party. These curves are normal distribution for the population that cast its votes. This pattern repeats itself in the cities or place where the competition was well monitored.

But plotting some of the contested states, the troublesome states, we find that some cheating took place. Not visible to the naked eye, but visible to SQL, awk, a Perl script and Gnuplot:

This is the state of Durango. The cheating is very obvious, a number of votes were artificially deflated or nulled. This is why the red line, representing the PRD, presents this incredible behavior for the normal distribution.

In the 1988 election, instead of deflating votes, they inflated votes, so the normal distribution was basically a mirror of this one (but for the wining party).

The problem with these curves is that without opening the electoral packages it is not possible to determine the actual numer of votes cast. We only know that tampering took place, but the real results could alter the curves significantly.

The results of these graphs are backed up by actual accounts of opened packages. Whenever packages are being randomly opened in these districts, votes that had gone missing for the PRD are showing up. 4,000 here, 20,000 there and all of a sudden the 250,000 vote difference (the 0.5% difference) between the candidates starts to shrink.

The opening of the packages and the events in the last week reported on the press (illegal opening of the voting packages (there is no mandate yet to packages yet), election materials found on the trashcan) has confirmed what can be identified with a few SQL commands. These have been documented elsewhere.

Now, tampering is not only hurting one party, its hurting all of them. So without a centralized and monitored recount it will be hard to determine the results of the election.

The raw data is available here.

The web site here is a wiki with a few other studies (in Spanish) on the official results. Full graphs (smoothened and unsmoothened, plus the data to plot them are available here

In addition to the tampering with the results, there are a few contested bits as well. For one, president Fox was barred from helping out the candidate from his party (mexican law requirement), but its a requirement that he ignored and kept using his platform as a president to push for him.

A number of ghost ads were run on the "quiet" period before the election by phantom organizations to instill fear in the population. Which had the effect that I have documented in a previous blog entry.

Although the smear campaign was eventually determined to have been illegal, it was too little too late. By the time the courts ruled against it on the grounds of illegality, the ads had aired for five weeks in a row. And they were quickly replaced with new smear ads that had to go through the same court process before they could be taken off the streets.