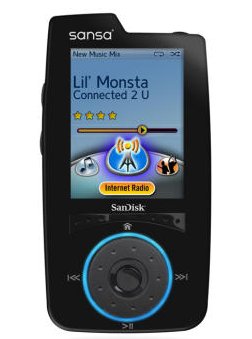 As of 2pm am the happy owner of the Sansa Connect.

runs Linux and uses Mono for its user interface, so am 100% biased about the level of awesomness that the device has.

Opening up the Sansa Connect

Zing should open up the development for the Sansa Connect.

The device has tons of potential: the great color screen, the Wifi, their custom-built GUI toolkit and the fact that they use C# and Mono to build all of this stuff.

In the last couple of hours, knowing that the device was running Linux and Mono, I could not stop thinking of the things I would like to implement:

I understand that going from being an embedded system vendor into a platform provider might not be easy but opening up the platform just a bit would achieve plenty. All that would be needed is:

A hackable platform for portable media players would be one way of differentiating from the iPod. Growing an ecosystem of third party developers that produced applications and components for Zing's tools would make these devices more appealing than the iPod is.

The WiFi on the device and the complete stack really open tons of new options on this device.

The device came in one of those plastic seals that are known to have caused more deaths that drunk driving in Guatemala. After a few seconds of Googling I gave up and teared the thing apart by cutting and bending until the thing was reduced to pieces of confetti. In the process I ruined Katey's scissors. Sorry about that Katey.

There was a sticker that said something along the lines of "IMPORTANT: Do not plug this device before installing the software". Or something about not turning it on before doing something. I would report the actual wording if the sticker was not burried underneath the remains of my tuna sandwich and the potato leak soup that I threw in the garbage can.

The device does not expose a USB mass storage interface, instead it exposes a Media Transfer Protocol (MTP) interface. Luckily we can use libgphoto2 and libmtp to access the device.

With the libmtp clients you can actually copy files into the device (the clients command line arguments are awful) which worked to upload "Don't fear the Reaper" and get enough cowbell out of it.

My Banshee was not compiled with MTP support and Amarok hung while trying to access the device. I shall look into recompiling my Banshee later with the proper support.

Internet Radio and the WiFi

This was fantastic. You select a wireless network and the little guy goes and gets an IP address and lets you play internet radio and browse Flickr pictures.

The Flickr browser seems fine, but am not really a Flickr user. It appears to come with a Yahoo messenger, but since I have exactly zero friends on my Yahoo Messenger (pretty much everyone I know has moved to Google Talk) I have not even tried it.

I am still pondering whether it is worth buying a Yahoo subscription for the device. The radio streaming from the radio stations on the device is pretty passable so am left wondering if I really want to give Yahoo 14 bucks a month. Am already paying Rhapsody and at least Rhapsody has a Linux web player (it sucks, but at least I can play it on Linux).

Two questions: Yahoo advertises that they have 2 million songs on Yahoo Unlimited. I am pretty used and happy with the music selection at Rhapsody, but I could not find how the music collections at both sites compare.

Rhapsody does not let me play music when am traveling outside of the US. I once read the excuse, but it must have been incredibly lame because I did not bother to remember it.

Would Yahoo let me play music when I travel? Decisions, decisions.

If I buy the Yahoo service, would they allow me to http get DRM-ed songs to upload to my device, so I can play all my music on Linux?