As I was reading this morning Twenty-Five Ways To Suppress Truth: The Rules of Disinformation I was pointed to about Groklaw's latest attempt to defy gravity.

As it is becoming common in some circles, some folks like to be purer than the virgin Mary. Groklaw has been for a while expanding into new levels of fundamentalism. The ends justify the means and all that:

That, to me, wasn't the news, since a Microsoft license was submitted once before, although I gather not by the company. But what I'm noticing is reactions. ComputerWorld collected some truly astonishing responses, and if you follow their links, it gets worse. First, though, the reaction that matters, from Michael Tiemann:

Michael Tiemann, president of the non-profit Open Source Initiative, said that provisions in three out of five of Microsoft's shared-source licenses that restrict source code to running only on the Windows operating system would contravene a fundamental tenet of open-source licenses as laid out by the OSI. By those rules, code must be free for anyone to view, use, modify as they see fit.

"I am certain that if they say Windows-only machines, that would not fly because that would restrict the field of use," said Tiemann in an interview late Friday.

Why would this need to be said? What nerve Microsoft has to even dream of trying for such a restriction. A license that restricts use to only the Windows operating system. Why would OSI even consider that? Have we lost our minds?

Groklaw: Another Smooth Move from Microsoft: Watch out, Ruby. Watch out OSI.

4. Use a straw man. Find or create a seeming element of your opponent's argument which you can easily knock down to make yourself look good and the opponent to look bad. Either make up an issue you may safely imply exists based on your interpretation of the opponent/opponent arguments/situation, or select the weakest aspect of the weakest charges. Amplify their significance and destroy them in a way which appears to debunk all the charges, real and fabricated alike, while actually avoiding discussion of the real issues.

The Rules of Disinformation

Microsoft has a number of licenses under the "Shared Source" umbrella. Most of them are completely useless from an open source standpoint. Michael Tiemann correctly points that out and they would fail the test.

The only license that can be submitted for OSI approval is the Microsoft Permissive License (Ms-PL) and possibly the Microsoft Community License (Ms-CL). The former is an Apache-like license, the latter is a GPL-like license. Am personally only interested in the first as that is what IronPython, IronRuby, the Dynamic Language Runtime and the ASP.NET client library are licensed under.

Groklaw goes on to rally up the troops over *other* licenses that are not even under discussion. You would think that this was so obvious that it did not need pointing out, but I guess it needs pointing out.

Later Groklaw seems confused: how a company can have software open sourced but not embrace it as an open source?

And does Microsoft want to be an Open Source company? Puh-lease. They may want you to think that, but Steve Ballmer just told the world that it can't embrace that model:

"Open source has been the issue that surrounds us. Could a commercial model like Microsoft compete with open source? And we've worked very hard on making the value of a commercial company surpass what the open-source community can deliver, because frankly, it's not a business model we can embrace. It's inconsistent with shareholder value."

Does it get any clearer? And if they have no intention of adopting that business model, the right question is: why are they proposing open source licenses?

There is no contradiction here. It is only contradictory if you live in a binary world world of black and white. Or if you find images like this to be magic:

An ugly trend is the adoption of the absolutist mindsets. "You are with us or you are against us". Well, for one, am not with Groklaw and am not with Microsoft. My goal is to make open source succeed as a platform and use open source for all of my server and desktop activities. I see no problem in taking open source contribution from companies that have not embraced open source as their business model as long as the code is open source. So I will happily consume open source code produced by Google, IBM and even Microsoft.

By the way, guys, check those license submissions carefully. Do they exclude the GPL? Do they exclude sublicensing or allow it only if the sublicensee contacts Microsoft to get permission? How about if a licensee sells the company?

Well, you would think they would have read the license, but it is easier to get on a rage binge than actually reading the licenses. There is no exclusion for the GPL or Copy-left licenses, the only problem is that the GPL is incompatible with pretty much anything, so chances are these will be incompatible altough am no lawyer and I do not know for sure; They do not exclude sublicensing and you do not need permission from Microsoft, nor do you need to contact them if you sell the company.

In that connection, I suggest you look very, very carefully at the IronRuby initiative. The first rule with Microsoft proposals has to be: look for the devilish part. It won't be obvious. Here's the license for it, Microsoft's Permissive Licence, one of the shared source licenses. Is it Open Source?

The MsPL seems to satisfy both the open source definition and the Debian Free Software Guidelines.

Is that the only question we should be asking? Here's another. Is IronRuby Ruby? [...] Ruby with a Microsoft twist.

Obviously they do not know much about IronPython and IronRuby and the trouble they went to in IronPython to remain compatible with CPython. The troubles they went into to be compatible have been explained numerous times, but they are also available on Jim's Zen of the DLR slide deck. I removed the OpenXML remarks as they were just more pandering.

The article continues by mixing half-facts and speculation as it is now a tradition over there:

In Ruby's case, my understanding is that it started as Ruby.NET under the MIT license.

It has different goals, IronRuby is layered on top of the DLR. They got permission to reuse the parser and tokenizer from Ruby.NET which had done all the leg-work of figuring it out (since Ruby does not have a formal language specification).

The half facts continue:

Microsoft has added some WPF functions to it. WPF stands for Windows Presentation Foundation. Some would tell you that WPF threatens an open web, the W3c standards, and basically anything involved with the open Internet. I don't know, not being a programmer, but that's what I hear.

I will agree that you do not know what you are talking about. IronRuby can call any CLI methods and classes just like Ruby.NET and IronPython can (or, gasp, CPython extensions can do so as well) . WPF being just a collection of .NET classes they can be invoked by IronRuby.

Being able to call CLI code is why I can write IronRuby applications that use Gtk# today on Linux without any changes to IronRuby, there is no magic needed: 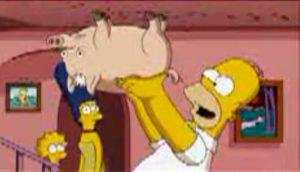 Oh wait. Does that means that libraries are an evil plot as well? Tune in next week at the same bat-time on the same bat-channel for an answer.

Then, Groklaw tries a little of guilt by association, always a fine choice in the most reputable sophistry circles:

Facts and legal terms mean nothing. If Miguel likes it, it must be bad. I hope Groklaw gets nominated for "Best use of Fallacies to Advance a Political Cause" award next year.

So if the license were to fit the open source definition then "it's time to look at the definition again". Why? Well, because Groklaw said so. Not because "they know" as we already know that they barely researched the subject.

Now am off to get some more work done on Moonlight, which will serve two purposes: allow Linux users to access Silverlight content and produce an ulcer on Groklaw's posters.

And as usual to avoid the usual round trip in the comments:

I think that we have reached a sorry state when our community has to resort to half-truths pandering with fear, uncertainty and doubt. The very actions that people criticize Microsoft for. We can do better than that.