As part of my Silverlight for Linux research I have prototyped a native code library that uses Cairo and ffmpeg to prototype some of the ideas from the Silverlight canvas. 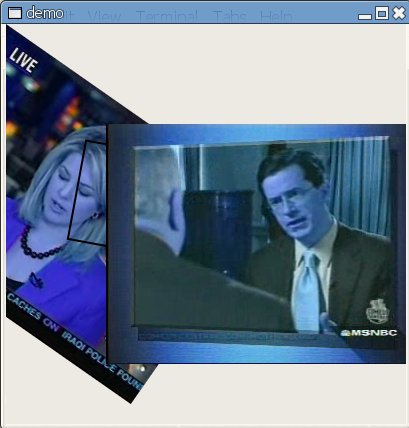 The above picture shows 2 videos playing, one of them rotated and a triangle object rendered in the middle as well. This was just a test to get an idea of what is involved.

The code does no attempt to keep up with the clock or do anything reasonable with time: it just renders stuff as fast as it can and does have no audio support. The next step is tune this a little bit (I do too many copies right now, too much stuff is done on the critical path) and then contrast this with an Agg-based implementation.

The canvas implementation that am using right now is inspired by the Gnome Canvas in many regards.

Today was the first day of the Compiler Lab and got to see again many good friends and some folks I had not seen for ages. This will feel like a name-dropping blog post, but here it goes anyways.

JB Evain and Rodrigo Oliveira were both late for the opening session, but they looked like they had been hacking all Sunday.

Jim Hugunin introduced the Dynamic Language Runtime in the second half of the morning and went through the design decisions behind the DLR. Although he has covered some of this information in blog this presentation was colored with the history of how decisions were made and the engineering choices that they had made that took them from IronPython to work on a general purpose framework for hosting dynamic languages.

The historical bits are always the most interesting to me. Jim talked about how they decided to go for a general purpose framework as people started asking for support for more dynamic languages. They were not really interested in writing all the compiler themselves, so instead they decided to turn their experience in building IronPython in some reusable work that could be used by others.

To accomplish this, they chose to implement four different dynamic languages extracting the common infrastructure into a reusable framework. Jim did not say how much they had learned from each language (which I guess is a good question for tomorrow), but he mentioned that the DLRConsole sample for Silverlight originally was pure Python. That it took him about three hours to add Javascript, three days to get Ruby in shape to work on the DLR and their new VisualBasic required almost no work.

I have extensive notes, but they are too extensive and am not sure I want to edit those, but you can get a good idea of what the presentations were all about from his blog posts:

The DLR is pretty serious, there were at least six people in the audience from the DLR team. I finally got to meet Dino Viehland, Bill Chiles was handing out copies of ToyScript (a reference small interpreter), Martin Maly was there, John Lam sat on the back (we all presume he was working furiously on his presentation for tomorrow) and Mahesh Prakriya was there as well.

Jim Miller of Scheme fame was there and made things all the more amusing by pointing out the similarities of certain features to Scheme. He also brought up a few issues that would need to be included in the DLR to support languages like Scheme as the day went by.

Jim Hugunin has always found interesting ways of demoing IronPython. He used to build a calculator with Avalon and rotate the buttons. Today he showed us some XNA space ship controlled with an Xbox control and later used IronPython to control a Lego Robot that his nine year old son had built.

John Gough was also here and he has retired from teaching at QUT. Nigel Perry has left the University too and is now working at Microsoft.

When I left the building there were zero talks scheduled for 5 or 15 minutes. Everyone is listed on the 10-minute column for tomorrow.

I had a fantastic dinner with Scott Gunthrie and Jason Zander. I got a chance to pepper them with questions about the early history of the .NET framework for my pet project on the archaeology of .NET to be published in May 2nd, 2076. They were also kind enough to explain to me some of the technicalities about the Silverlight implementation. I should be updating the wiki page with the details later.

Apparently "Console.ReadLine" on Cygwin in some way gets line editing even from C# applications. Am not sure how this works, but Rodrigo can not live without this feature in Booish.