A common problem that I face is explaining to people the current situation of Mono. This is a problem of our own creation when we sketched the major milestones for Mono.

When we originally plotted the course for the Mono Roadmap things looked pretty simple, they were roughly like this:

There is a bit more than just tracking the API, as you can see, there are really two dimensions to what we wanted to call Mono 2.0: 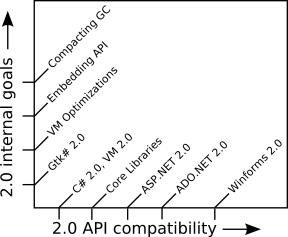 One dimension is the 2.0 compatibility with .NET, and another one has some internal goals of ours. For example, we considered that 2.0 was a good time to break the embedding API for the runtime and also to release the compacting collector.

There were a few factors that started to complicate our numbering scheme:

By the time we shipped our Mono 1.2 last year, the problems with the simple versioning numbers started to show. Mono 1.2 included many features from 2.0:

Almost a year has passed and we are about to release Mono 1.2.6, six releases after Mono 1.2. Compared to last year's Mono, this upcoming release is a major upgrade, we have since:

From an API perspective, with the exception of Windows.Forms 2.0 we have pretty much completed the 2.0 support (what remains to be done is tracked here for the core and here for winforms).

In addition, some bits from 3.5 are being shipped in this upcoming version.

Since we continue to ship updated versions of Mono every 8 to 10 weeks we have only felt that we needed to update the smallest version number (1.2.6 is our upcoming release) each time.

My concern is that 1.2.xx does not really convey the feature set in Mono and some people get the wrong impression of where Mono is at. This problem is made worse because we have been using the simplified numbering scheme for years.

Just today someone emailed me asking when ASP.NET 2.0 will be released, another person asked about ASP.NET AJAX (supported in SVN, and in the upcoming 1.2.6).

We are looking for a creative solution to this problem.

Without using Mono versions, these are roughly the upcoming milestones: