Apple locked ecosystem and the EU 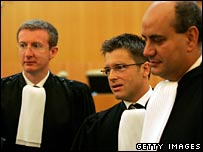 Ian Williams mailed me to point out an article this morning at the BBC about Apple and its practices.

The article builds on the EU ruling against Microsoft and points out:

Apple has spent much time trying to ensure that anyone who buys an iPod is completely locked in to an Apple-centred world in which they use iTunes, buy from the iTunes Music Store, purchase only Apple-certified iPod accessories and, ideally, abandon their plans to migrate from Windows XP to Vista and instead purchase a shiny new iMac.

It is very nice to see the BBC coverage go into the depth of the issues involved in the closed interfaces (the now read-only database; the streaming limited to Apple products by means of using encryption to lock the competition out; the new cable add-ons; the locking-out of Linux jukebox software; and the ringtones fiasco):

It is hard to see what justification there can be for these various measures other than an attempt to lock customers in and keep competitors out.

I've asked Apple why it is doing this, but it has remained characteristically silent, preferring to invest its time and energy in the iPhone's UK launch.

But its business practices do not stand up to scrutiny, and when it comes to music downloads it is just as bad as Microsoft on servers, putting its time and energy into creating barriers to competition instead of letting its developers and designers concentrate on doing great stuff.

If Apple was serious about building a music industry around downloads and digital devices then it would open up its devices and interfaces to allow greater innovation and greater competition.

It would have faith in its own products to compete in this larger ecosystem instead of trying to lock everyone in with tactics that resemble those of IBM in the days of the mainframe.

I wrote a presentation this morning using Microsoft's PowerPoint, but displayed it using Apple's Keynote. Apple can sell Keynote because it took PowerPoint apart and figured out how the files work.

Had Apple been unable to do so, or found that every time it figured out what was happening Microsoft changed the format, it would have complained loudly.

Yet this is exactly the technique it is using against third party jukeboxes. And it is time it stopped.

The BBC article missed the bit where purchasing DRM music also locks you into a particular platform (Apple could license the DRM to allow users to re-encode the songs into another DRM if necessary).

So the EU has teeth, lets make sure that they do not end up wrapped around Apple marketing and they act decisively to ensure interoperability and an open ecosystem.