We have released an updated Mono 1.2.6 package for MacOS X that contains Imendio's Native Gtk+ for OSX, Gtk# and MonoDevelop with Mac support. It is now available from our downloads page. 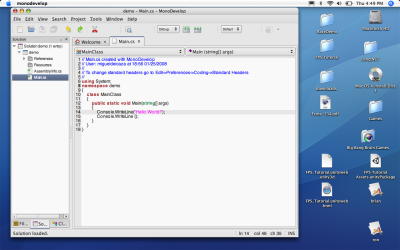 MonoDevelop has pretty much the same feature parity than Linux does. There are a few missing features that we hope to resolve in the future, and there is plenty of room to improve.

Our recent efforts to better support the OSX stem from our belief that some Windows expats will want to continue building .NET applications using the Mac. And once they have updated their applications to run on the Mac, the code will run just as well on Linux.

Also, we believe that Unity3D developers will find auto-complete a useful tool when writing extension scripts for Unity. No templates or integration yet, but hopefully we will have those in the future.

This is only our first step.

Eventually, we would also like to bring MonoDevelop to Windows. Not to compete with SharpDevelop as they are focused on being a great IDE for Window developers. Our focus will be in bringing Stetic (our Gtk# GUI designer) to developers building cross platform applications.