CodeProject has a nice article by Olivier Lecointre on how to write custom Gtk# controls. 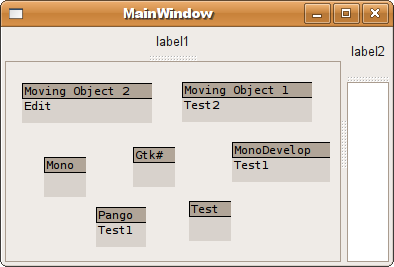 Sample widget from the article.

I recently made the switch to Ubuntu and I am quite delighted with it. I develop mainly on .Net and my dependence on some Windows tools was the sticky point that made me wait this long. This is now not really an issue, thanks to the great work of the Mono and MonoDevelop teams, and the related libraries like Gtk#, Cairo and Pango.

I wrote a cooperation tool that I use on a daily basis and my first goal after the switch was to port it over with Mono and Gtk#. After a few adjustments caused by the fundamental differences between Windows.Forms and Gtk#, I have to admit that the port of the application was a lot easier that I initially thought; I replaced the UI controls by widgets, set the various forms to use the Gtk# layout, and that is pretty much it. The rest of the non UI code worked as expected with an overall good performance.

An area that gave me the most difficulty was the usage of custom controls with a behavior that is different from the base Gtk components. This is the focus of this article.