Just got back from Mix 08 in Las Vegas. It was good to catch up again with old friends and make new friends. As usual, the event was a blast. To me the big interesting news were Silverlight 2.0 and the ASP.NET MVC release (details at Phil's blog).

Ray's keynote was light on the details, and too abstract for my taste.

The IE8 announcements were interesting. Their contributed test suite for CSS is good news, and came up with two nice new features: activities and webslices. Both ideas and their specifications were released under the OSP, and apparently by the end of the day there was a Mozilla plugin that implemented Activities. Hopefully we will get WebSlices on Linux as well.

Of course my personal favorite were the Silverlight 2 updates.

Sadly, I could not make it back to Part 2 with Mike, as the room was full and the bouncers were turning people away (and I also missed the repeat the next day).

If you love the software that you build, Jensen Harris' presentation on the History of the Office Ribbon is probably the most inspiring talk I have seen in years.

Every developer building GUI applications should listen to this presentation. This is as inspiring as Joel's articles on UI design were a few years ago when we were working on GNOME 2 or Andy's focus on empowering users were back on the Eazel days.

First things first. Catching up with Silverlight 2 is a great place to get demos, samples, tutorials, presentations and in-depth coverage of what is new in Silverlight 2. 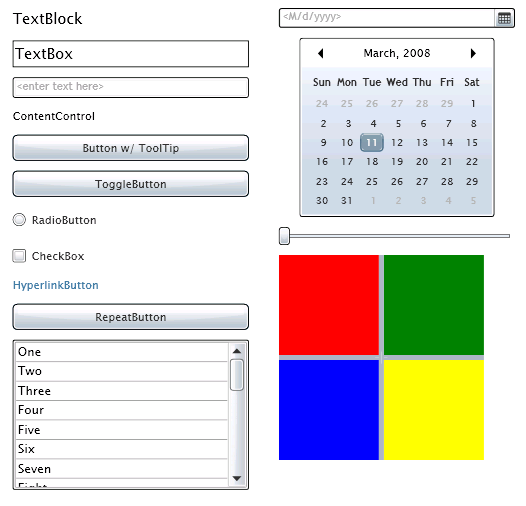 Silverlight 1.1 consisted of a .NET binding on top of the core Silverlight 1.0 engine and the addition of the DLR and DLR-based languages. This was never intended to be the last word on it, and it was mostly a showcase of things to come.

Silverlight 2 is the evolution of the 1.1 model in a number of directions.

The distribution model: Possibly the most interesting change is that there is now a "core" of Silverlight that will be available on every system and a model to bundle extra libraries for Silverlight. This keeps the Silverlight 2 download small, but most importantly it means that Silverlight 2.0 can ship without having to complete and freeze the APIs for every possible feature that people want.

The "extras" collection of controls are delivered in this way (like the databound controls) as well as things like the DLR. This means that you can use the DLR today, and still allow the DLR and Iron* teams to continue working and improving it without locking developers to an old version of the DLR that would have been deployed with every 2.0 installation.

Some other important changes:

At the keynote Scott announced that the high-level Silverlight controls were going to be open sourced, they will be released under the MS-PL.

There was apparently a miss-understanding and the controls were released inadvertently under a more restrictive license, but both Scott and Brian confirmed that they wanted us to use those controls.

This is brilliant, not only because it helps us, but for a load of useful reasons: it will let developers learn how to write controls early on the Silverlight 2 release process and will allow developers to fine-tune controls if they don't do exactly what they need.

This is important in particular for things like the DataGrid view, as there history has shown that there is no one-size-fits-all (regardless of how parameterized these controls are) 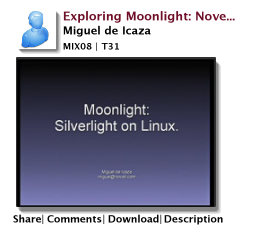 If you install Moonlight from SVN, you will be able to watch the presentation on Linux.

Sebastien is now working on the security aspects of Moonlight (auditing code, understanding the attack surface, trying to break our code). He posted an updated diagram of the trusted callers in the various Silverlight 2 assemblies.

I personally would like to see "Meet the Experts" come back. Meet the Experts last year (and at the PDC) happens in the afternoon, as a last-session, there is food delivered and there are no other sessions scheduled, so its a good time for everyone to get together and quickly get some questions answered.

In my opinion, the bars and the party are no substitute for this session. Discussing styling of Silverlight controls on the bar goes more or less like this "WHAT ARE THE LIMITATIONS?", "NONE, YOU CAN CHANGE THE ENTIRE VISUAL TREE", "THE WHAT TREE?", "VISUAL", "WHAT?", "THE VISUAL TREE", "WHERE IS THE TREE?".

I still had a blast, but I would like to see "Meet the Experts" back on the agenda.