MonoDevelop 1.0 has been Released

MonoDevelop 1.0 is designed mostly for Linux developers creating Gnome and ASP.NET applications but MonoDevelop is also available for MacOS users that download our Mono installer and will still be useful if they are building Mono-based applications on OSX.

The IDE has many of the features that you would expect from a modern IDE for Mono: support for programming in multiple languages, an extensible design, editors and designers for ASP.NET and Gnome applications, integration with Unix toolchains and Visual Studio Solutions, support for source code control and following standard Unix development practices, integrated NUnit testing, Unix Packaging and Deployment (following the GNU conventions, and Mono conventions for libraries and packages), internationalization and localization, tools to maintain your project documentation and command line tools to access this functionality.

We have some pretty good language support in this release: C#, VisualBasic.NET, Java, C and C++. Check the previous link for the details as to how extensive the support is for each feature.

There is more documentation on MonoDevelop available as well.

In late 2003, a few developers were looking for an IDE to write C# code in Linux, not something too fancy, but something that would provide Intellisense features.

Windows developers were used to Visual Studio, and Mike Krueger and the developers at Alpha Sierra Papa had created the very successful SharpDevelop project, a .NET Windows.Forms-based application. At the time, Mono did not have a working Windows.Forms implementation (it would take another three years before our official 1.0 release of Windows.Forms) so this ruled.

Although there had been an attempt to make SharpDevelop portable by Mike (with a variation on the theme of Eclipse's toolkit) this effort had not been completed, and SharpDevelop continued to be a Windows.Forms application.

Pedro Abelleira first extracted the editor and intellisense engine from SharpDevelop into a standalone component that rendered using Gtk# instead of Windows.Forms. This was back late in 2003. Initially it was only going to be a text editor.

Development started mostly on irc and quickly contributors started to porting various other pieces from SharpDevelop or rewriting the GUI components with Glade and Gtk#. By late 2003 Todd Berman had taken over the maintenance duties of MonoDevelop and sent me a email on December 31st:

Oh, and we are shooting for eating our own MonoDevelop dog food by the end of this coming weekend, and it looks like we will be there even before then.

History of the GUI Designers

As regular Gnome developers were were very happy using Glade and Gtk#'s [Widget] attributes to bind the XML GUI representation to our own variables. You double clicked on the .glade file, and Glade would launch from within MonoDevelop, you would tweak your UI, save it, and rerun from MonoDevelop.

Around this time Dan Winship from the desktop team started working on a new GUI designer for Gnome, the Stetic GUI designer. This was a Gtk#-based GUI designer, and the idea is that this could be embedded in other applications. An early screencast of Stetic capabilities is available here:

Work continued, but Dan eventually moved on to other projects. By the end of 2005 we were looking at integrating a GUI designer directly into MonoDevelop and Stetic was not ready to do that, so instead Lluis integrated Glade-3 into MonoDevelop:

This project did not live for too long. Glade-3 had to be patched, and we quickly realized that all the features that we wanted would require more than trivial changes to Glade-3. So we decided that instead of investing time in the C code base and the bridge to C#, that we would complete Stetic which was entirely written in C#, this is what it looks like today: 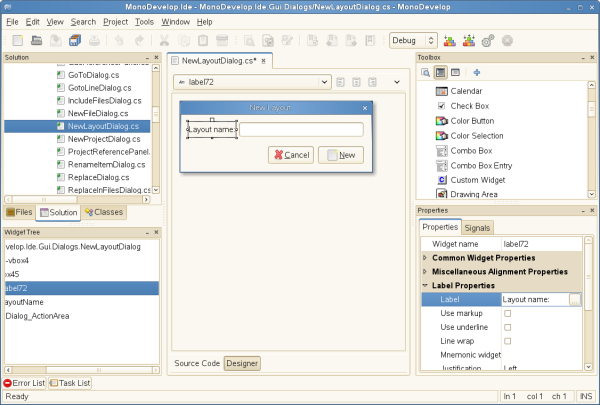 A complete screencast of Stetic and today's MonoDevelop integration shows all the work that Lluis and his team did to provide a smooth editing experience.

Today MonoDevelop not only supports forms design, but it also provides menu and toolbar editors and support for managing your icon collection in your application.

A key feature of .NET is the creation of reusable components. Lluis brought this to MonoDevelop and the stetic editor. This screencast shows how to create widget libraries with MonoDevelop and Stetic that you can later reuse in your projects or in other projects.

The team has already started work on the next release of MonoDevelop, version 1.1. Our goal is to release new versions of MonoDevelop every six months. To do this, we are planning on doing all of the disruptive changes on branches, and always keep our HEAD revision stable.

There are a number of incremental improvements on our task list, but also some exciting new features. There were many things that we could not get in time for 1.0 are being incorporated or implemented since the 1.0 tree branched a few months ago. Some of the new features that trunk users or alpha testers can get include:

New Managed Editor: The text editor is now entirely managed and has many new features like configurable keybindings (Really nice Emacs keybindings), split windows, Emacs/Firefox-like incremental search on a toolbar (no more annoying dialog box popping up in the middle of your source code) and one of the most requested features: region folding.

Moving to a fully managed widget written in C# gives us a lot of flexibility to improve the editor. This is a theme that was consistent in the 1.0 release, moving from Glade to Stetic and moving from the GdlDock to our own managed dock paid off every time in terms of developer agility and features that we could implement.

ASP.NET editor: new improvements will provide auto-complete and intellisense while editing .aspx files. Also, with the maturity of WebKit/Gtk we are hoping to replace Mozilla as the GUI editor for ASP.NET pages with this.

Integrated Debugging: Currently the Mono Debugger is only available as a command line tool. Our next release of MonoDevelop will provide debugging directly from the IDE.

Windows Port: There is now a Windows profile release of MonoDevelop. This will be great for developers that are building applications using Gtk# on Windows and want to get access to the Stetic GUI designer which currently requires them to use Linux to do this. It is not our intention to compete with SharpDevelop as an open source IDE for Windows Programmers although there might be some overlap.

msbuild-based model: We want to move to the Visual Studio build model to improve interoperability with Visual Studio, Blend and SharpDevelop and other tools that use msbuild files as their interoperability layer. This will allow developers to easily move across tools to work on different parts of a project.

XML Editor: A backport from SharpDevelop's XML editor has been integrated.