Earlier this week we released the first beta of MonoDevelop 2.0.

MonoDevelop 2.0 is a very ambitious release in terms of the new functionality available since the MonoDevelop 1.0 release back in March 2008. It is ambitious, but also very stable, we have had hundreds of people dogfood this new release of MonoDevelop during the entire development cycle.

There are a number of new features since MonoDevelop 2.0 that are worth calling out:

MonoDevelop now has a built-in debugger. The debugger supports both debugging Mono-based applications as well as native applications using GDB.

While hovering over variables, you can explore the values of complex data structures: 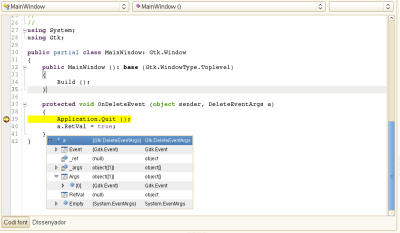 You can debug both at the source code level, or the generated assembly code: 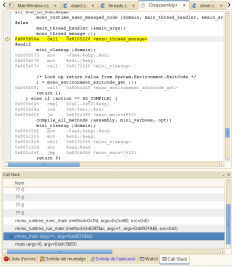 Auto-complete on the watch window: 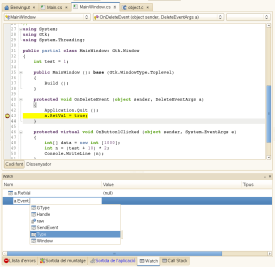 Auto-complete in the watch window.

You can also attach to running processes, both native or Mono processes and debug them: 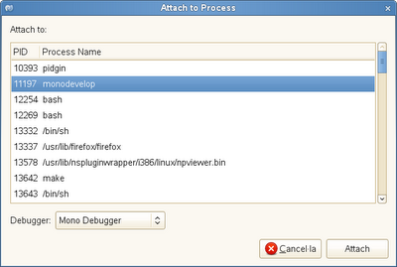 For more information see our list of supported features.

Our ASP.NET story is getting better. web projects are now compatible with Visual Studio 2008 and Visual Web Developer 2008 SP1.

We also now have DOM breadcrumbs in the editor as you edit your file, and a nice DOM/Document outline for navigating your HTML and DOM documents.

The beta does not contain this feature, but we will be publishing an Add-in that will help you get your ASP.NET MVC projects up and running with minimum hassle by the time ASP.NET MVC ships.

A new text editor, this text editor is written entirely in C# and replaces the GtkSourceView widget. This has allowed us to more easily add features to the editor and bring MonoDevelop to the 21st century. Some of the features in the new text editor include:

Intellisense now works for pretty much every piece of the C# 3 language. I am not supposed to use the word "Intellisense", but I just did.

Also, sagacious readers will have noticed that I sneaked in "3.0" in the above statement. MonoDevelop now understands the C# 3.0 syntax. A great companion to our award-winning C# 3.0 compiler.

Now, technically speaking we have not received any awards for our C# 3.0 compiler, but we should have, because we are awesome. And in fact, I will be arranging a dinner at my place this coming weekend where we will award prizes to the best pieces of technologies and our C# compiler is a nominee.

Notice how it also supports nice automatic generations of methods when you declare an event:

MonoDevelop is also aware of types, so for example, if you type "override" when entering a method, it will offer a list of methods that can be overwritten. O-M-G.

There are other cute features like MonoDevelop can stub out interface methods for you. O-M-G.

There are also a few features that we liked from editors like TextMate that should make it more suitable for managing web projects like the revamped "Go to File" dialog (invoke it with control-alt-o). It is now able to do acronym searches.

The XML Editor from SharpDevelop has been fully integrated into MonoDevelop and improved. It supports code completion of tags, attributes and attribute values (available for registered XSD schemas). A range of schemas are supplied with MonoDevelop.

XML files can be validated using the built in schemas, and can have XSL transforms applied. in addition, XSD schemas can be generated from XML files.

For instance, it is currently used to allow editing of Silverlight XAML files and have auto-completion of XAML tags that are valid for Silverlight/Moonlight.

We have switched to msbuild-style project files to increase interoperability with Visual Studio.

Support for opening multiple solutions at once, and support for Workspaces.

We now have cascading project policies. This is useful for example to use different coding styles depending on the project that you are working on. 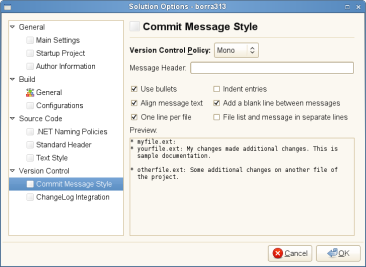 You can now make your custom widgets available on the toolbox, by just adding the [ToolboxItem] to your widget.

My favorite one is that now constructed dialogs and windows expose the Gtk.UIManager as a field. It was previously hidden, and not possible to adjust the UI dynamically without much work.

There is no better way of learning an API than browsing the data types exposed and their relationships. A new Assembly Browser has now been included. 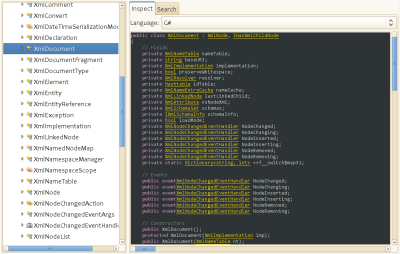 A cute little window pops-up when you press Control-Tab these days:

Support for the Vala programming language has been integrated: 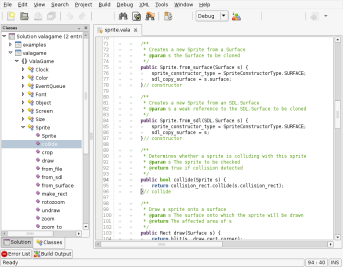 We are very excited about this release, and there are a few areas in which we would like to improve MonoDevelop for future releases.

We want to bring MonoDevelop to Windows to be able to reach into more users and to help developers doing Gtk# development on Windows. 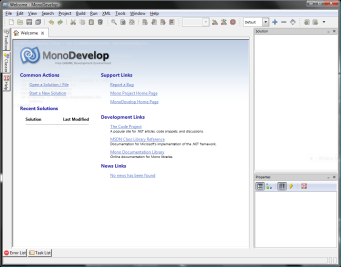 We are also currently shipping a preview of MonoDevelop for the Mac, it is not yet ready as there are a few kinks that need to be sorted out on that platform, but we are working to resolve those issues. For example, we want to integrate with the Mac menu system, and to provide bindings that are familiar for Mac users. Here is a preview: 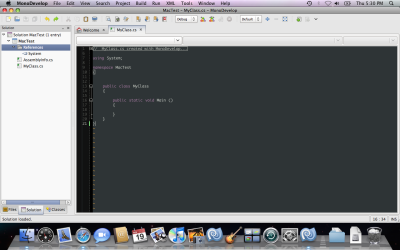 Super-Alpha-Preview of MonoDevelop on OSX.

Unity has stated that they will be making MonoDevelop the standard editor for Unity3D on MacOS.