Interesting find: Coyote Linux -a firewall in a box- configuration of Linux is using Mono and ASP.NET for its admin tools. 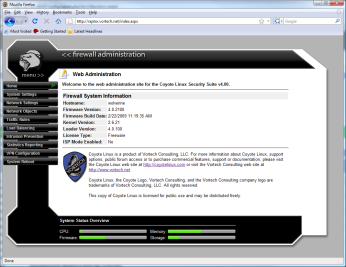 Here is the rationale for the switch to C#:

One of the biggest changes to this release of Coyote Linux is the use of C# as the primary development language used for most of the administration, configuration, and maintenance utilities. Previous implementations of Coyote Linux made heavy use of C, Pascal (namely Delphi), and Bash shell scripting for this purpose. The change is being made to C# after nearly 2 years of working with the language in a cross-platform setting which involved the use of both Red Hat Linux and Windows 2003/2008 servers. The ability to use a single development environment (in my case, Visual Studio 2008) and produce executables that will execute in unmodified form on both Linux and Windows has seriously put the “R” in RAD programming. I am still actively involved in projects that require the development of cross-platform utilities and am already paying for all of the necessary licenses to provide my company with a full array of software and hardware to develop applications that work in a mixed server OS environment.

I have spent a great deal of time testing C# applications under Linux using Mono as the executing environment. While this is not necessarily the best choice for small, embedded hardware (486 / ARM class processing power) it works very well for anything using i686 or better technology. Another wonderful advantage of using this technology is the ability to run the same set of executables on both 32 and 64 bit hardware without the need for compatibility libraries to be installed. The installation of Mono dictates the 32/64 bit execution environment, preventing the need to recompile the full Coyote Linux software package.