Today Oracle sued Google over Java patents and copyrights that they claim Google's Android OS infringes. The lawsuit claims that Google knowingly infringed on those patents, and that the continued distribution of Google's Android is harming Oracle's Java Business.

You can read the actual complaint, the patents referenced are:

There is also a copyright lawsuit, but there are not enough details on the complaint to figure out what the claim is. Until there is a trial, we will not really know what is being asked here.

I would like to think that this is going to be solved with a quick settlement where Oracle will shake Google for a few billion dollars and the entire matter will be put behind.

Oracle will likely want to settle with Google under terms that will only cover Google's own use as they want to go shaking other OEM trees for more cash.

An unlikely scenario is for Google to pay the bills for all Android OEMs as they are coming out fast and strong from every corner of the world.

It occurred to me that Oracle could sell all the Java assets to Google. But Google probably passed on this opportunity back when Sun was put on the market.

Sun's Ex-CEO Jonathan Schwartz has recently taken to the blogwaves to blog about the things he could not tell us while he was a CEO of Sun. While he might have found a new voice for gossip from the Sun days, he will not say a word on this matter, because he was likely engaged in shopping the patent lawsuit around.

Sun had created Java, but it turned out to be very difficult for Sun to monetize Java directly after the initial source code license deals that they struck with IBM, Microsoft, Oracle, Netscape and others. They created the J2EE market, just to find that other companies and startups executed better than they did on the systems that they had initially engineered.

Sun was left in the uncomfortable position of being the owner of the technology that everyone was cashing out on, but they themselves had very few revenue streams for Java. Like Clemens Vasters joked on Twitter today:

They had the Microsoft lawsuit cash and they had the embedded licensing business with Java Micro Edition and Java Standard Edition licensing deals.

The open sourcing of Java was also carefully planned. By picking the GPL as their license, they ensured that embedded system OEMs and developers would have to negotiate a different license with Sun if they wanted to use the OpenJDK on their systems.

There is very little public information on the Google/Sun split over Java ME and the creation of Dalvik. The rumors on the grapevine were that Google and Sun could not reach an agreement over the Java Micro Edition licensing. Sun wanted to sit in the middle between Google and the handset OEMs, while Google wanted to create a free-for-all operating system.

When it became clear that they would not be able to reach an agreement, Google started a project to replace Java Micro Edition and they used some clever engineering techniques that blended the best of both worlds.

It is likely that during these negotiations, Google threatened to build their own Java runtime and Sun countered with a list of patents. This would explain why Google went through the trouble of making the Dalvik virtual machine explicitly incompatible with the existing Java virtual machine instructions.

Although Dalvik uses a different set of instructions, Google created a translator that recompiled Java code into Dalvik code, and with this, they worked around whatever licensing technicalities they were aware at the time of the negotiations.

Needless to say, Sun was not happy with Dalvik. Not only because Sun had lost a large licensing deal, but also because it had the potential of becoming the de-facto Java virtual machine that everyone on the embedded space would pick instead of Sun's own Java Micro Edition.

In late 2007 Google announced both Android and the Open Handset Alliance to the public. On the Java front, Sun had delivered on the promise of open sourcing Java, but it had been a rough year for Sun and it would get worse, in the next twelve months after the announcement, Sun stock would lose 80% of its value.

Sun had their plates full, so Sun did not feel the need to react immediately to the Android threat, so they kept their grievances to themselves.

But Jonathan started to shop the company in late 2008. The monetary value of the Java assets had been devaluated due to the open sourcing of the technology under the GPL. I am going to bet that the same careful planning that went into picking the GPL went into pitching the potential for lawsuits.

The world had already witnessed the awesome iPhone and the eyes were on Google to deliver a killer phone. Jonathan must have known this and he must have been pitching this to the potential suitors.

By the time Oracle bought Sun, they knew that they would be going after Google and anyone else with a big, fat checkbook that did not have a licensing deal in place.

And that explains the Exodus of famous Java people from Sun shortly after the acquisition. The wheels of the lawsuit started spinning the moment the sale was done. Those employees are probably under NDA.

Update: I was wrong, apparently Gosling was not under NDA and has confirmed exactly what I said above:

Oracle finally filed a patent lawsuit against Google. Not a big surprise. During the integration meetings between Sun and Oracle where we were being grilled about the patent situation between Sun and Google, we could see the Oracle lawyer's eyes sparkle. Filing patent suits was never in Sun's genetic code. Alas....

I hope to avoid getting dragged into the fray: they only picked one of my patents (RE38,104) to sue over.

So now we know that Jonathan shopped Sun with a big "Sue Google" sign. So much for his visionary patent defense against Apple and of course this jewel:

The most egregious of such suits was filed against Sun by Kodak (yes, the film photography people).

Egregious, because Kodak had acquired a patent from a defunct computer maker (Wang) for the exclusive purpose of suing Sun over an esoteric technology, Java Remote Method Invocation (“Java RMI” – not exactly the first thing that comes to mind when you hear “Kodak”).

And he was just playing Wang's role a couple of months ago.

Update: this post from the Dalvik announcement era discussed how Dalvik's work around the license-from-Sun challenge.

Some Background on the Java Patents

The Java specification patent grant seems to be only valid as long as you have a fully conformant implementation:

(a) fully implements the Specification including all its required interfaces and functionality;

(c) passes the Technology Compatibility Kit (including satisfying the requirements of the applicable TCK Users Guide) for such Specification ("Compliant Implementation").

This seems to be what the lawsuit is hinged upon.

I vaguely remember in one of the endless anti-Mono discussions that someone pointed (maybe it was Gosling himself?) that Java had a patent grant for anyone to implement under any conditions.

They pointed to the spec. And I remember seeing this on the spec and thinking that it was a generous patent grant. Perhaps I was confused and the only patent grant is the one in the previous section, but if you know of the other document, please let me know.

By GPLing Java, Sun lost some of the exclusive rights that they used to have, in particular, anyone using the open sourced version of the OpenJDK is given the patent rights to run the software.

The problem is that the rights are only available as long as you are using the GPL version of Java. Any patent grants are not available if you use a third-party licensed version of the Java virtual machine. In that case, it seems like the only option would be to to go back to the Sun licensing terms.

Too many engineering resources are devoted to Android at Google and at their partner companies, but I can not help to think that Google could migrate Android from Java to the ECMA/ISO CIL and C#.

Unlike the Java patent grant, the Microsoft Community Promise for both C#, the core class libraries and the VM only require that you have a full implementation. Supersetting is allowed.

Additionally, Microsoft has placed the .NET Micro Edition entirely under the Microsoft Public License which comes with an even more generous patent grant, and covers a superset of the code covered by ECMA/ISO 335.

We have open source implementations of both, and even more luckily, the ECMA/ISO VM specification allows for different profiles, to allow for ultra-small or server-sized versions of the VM to be created. Ideal for mobile platforms.

Google could settle current damages with Oracle, and switch to the better designed, more pleasant to use, and more open .NET platform.

There is a silver lining in this whole mess, and it is that the tweetosphere came up with a few funny tweets, here are my favorites: 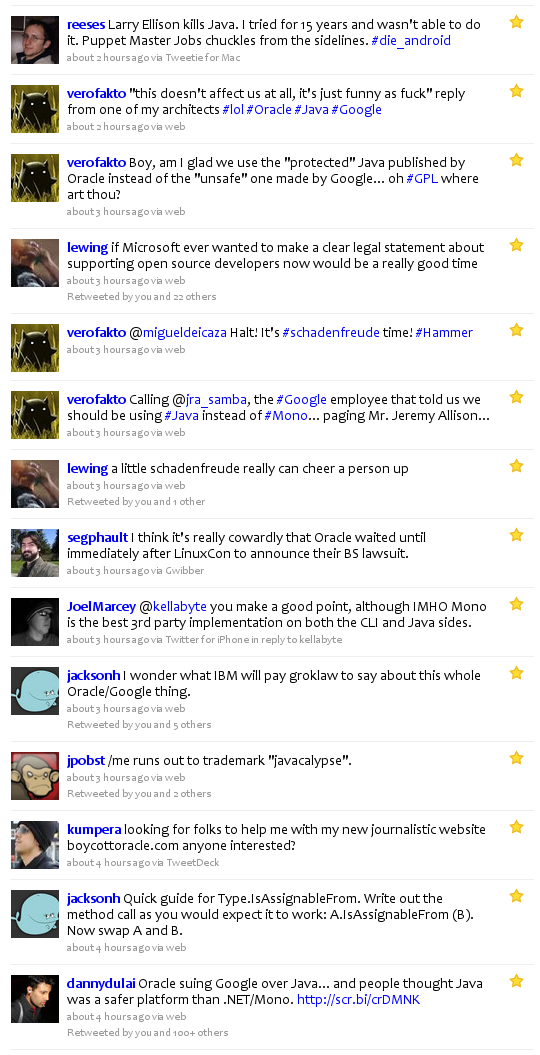 And while you are here

I am very excited to see the first MonoTouch book published.