The Mono runtime engine has many language interoperability features but has never had a strong story to interop with C++.

Thanks to the work of Alex Corrado, Andreia Gaita and Zoltan Varga, this is about to change.

The short story is that the new CXXI technology allows C#/.NET developers to:

CXXI is the result of two summers of work from Google's Summer of Code towards improving the interoperability of Mono with the C++ language.

This section is merely a refresher of of the underlying technologies for interoperability supported by Mono and how developers coped with C++ and C# interoperability in the past. You can skip it if you want to get to how to get started with CXXI.

As a reminder, Mono provides a number of interoperability bridges, mostly inherited from the ECMA standard. These bridges include:

When it came to getting C# to consume C++ objects the choices were far from great. For example, consider a sample C++ class that you wanted to consume from C#:

One option to expose the above to C# would be to wrap the Demo class in a COM object. This might work for some high-level objects, but it is a fairly repetitive exercise and also one that is devoid of any fun. You can see how this looks like in the COM Interop page.

The other option was to produce a C file that was C callable, and invoke those C methods. For the above constructor and method you would end up with something like this in C:

This gets tedious very quickly.

Our PhyreEngine# binding was a C# binding to Sony's PhyreEngine C++ API. The code got very tedious, so we built a poor man's code generator for it.

To make things worse, the above does not even support overriding C++ classes with C# methods. Doing so would require a whole load of manual code, special cases and callbacks. The code quickly becomes very hard to maintain (as we found out ourselves with PhyreEngine).

This is what drove the motivation to build CXXI.

[1] The conventions that allow Mono to call unmanaged code via its COM interface are simple: a standard vtable layout, the implementation of the Add, Release and QueryInterface methods and using a well defined set of types that are marshaled between managed code and the COM world.

Accessing C++ methods poses several challenges. Here is a summary of the components that play a major role in CXXI:

For example, given this C++ class definition, with its corresponding implementation:

The C++ compiler on my system will generate the following mangled names for the SetVisble, Layout, Draw, SetText and GetText methods:

Is roughly compiled into this (rendered as C code):

For CXXI to support these scenarios, it needs to know the exact layout for the vtable, to know where each method lives and it needs to know how to access a given method based on their mangled name.

The following chart explains shows how a native C++ library is exposed to C# or other .NET languages: 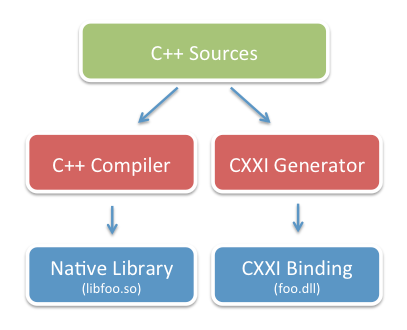 Your C++ source code is compiled twice. Once with the native C++ compiler to generate your native library, and once with the CXXI toolchain.

The CXXI toolchain produces a .NET library that you can consume from C# or other .NET languages. This library exposes a C# class that has the following properties:

This is pure gold. 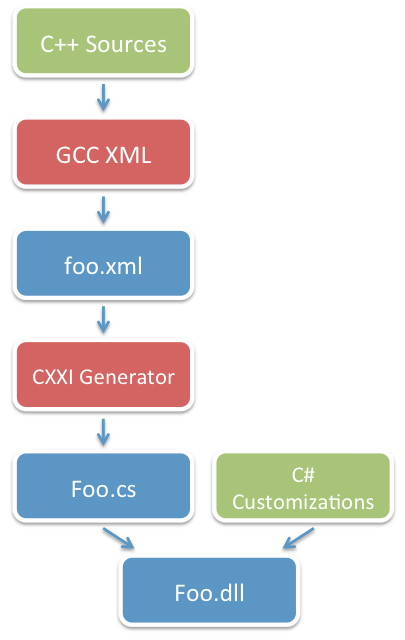 The CXXI pipeline in turn is made up of three components, as shown in the diagram on the right.

The GCC-XML compiler is used to parse your source code and extract the vtable layout information. The generated XML information is then processed by the CXXI tooling to generate a set of partial C# classes that contain the bridge code to integrate with C++.

This is then combined with any customization code that you might want to add (for example, you can add some overloads to improve the API, add a ToString() implementation, add some async front-ends or dynamic helper methods).

The result is the managed assembly that interfaces with the native static library.

It is important to note that the resulting assembly (Foo.dll) does not encode the actual in-memory layout of the fields in an object. Instead, the CXXI binder determines based on the ABI being used what the layout rules for the object are. This means that the Foo.dll is compiled only once and could be used across multiple platforms that have different rules for laying out the fields in memory.

The code on GitHub contains various test cases as well as a couple of examples. One of the samples is a minimal binding to the Qt stack.

CXXI is not finished, but it is a strong foundation to drastically improve the interoperability between .NET managed languages and C++.

Currently CXXI achieves all of its work at runtime by using System.Reflection.Emit to generate the bridges on demand. This is useful as it can dynamically detect the ABI used by a C++ compiler.

One of the projects that we are interested in doing is to add support for static compilation, this would allow PS3 and iPhone users to use this technology. It would mean that the resulting library would be tied to the platform on which the CXXI tooling was used.

Currently CXXI only supports deleting objects that were instantiated from managed code. Other objects are assumed to be owned by the unmanaged world. Support for the delete operator is something that would be useful.

We also want to better document the pipeline, the runtime APIs and improve the binding.