Why you are not getting laid 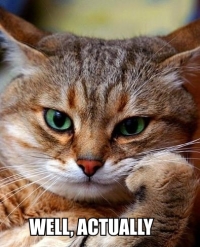 As software developers, we develop habits that allow us to build products that work and do not fail under stress. Every software developer knows what an "off-by-one" error is, and like the Karate Kid, we train extensively so we can avoid those traps. We learn how to avoid these and other similar software problems and we sharpen our skills to find logic errors.

As we mature as developers, finding logic errors and incomplete solutions becomes our way of life. It defines us.

But our engineering strength is also our social weakness. Countless times as engineers you will find yourself interrupting someone telling a story, an anecdote or a joke to correct a false assumption, provide an extra fact that the narrator overlooked, give a bigger perspective on the problem or point out that the joke premise is actually flawed.

You can identify this behavior because the person interrupting usually starts with the phrase "Well, actually...".

As a kid, I thought this was my strength. I knew a little bit more than my sister. So whenever she would say something, I would quickly interject something like "Well, actually, the origin of the word Shih Tzu means Lion Dog and has nothing to do with the dog's digestive patterns".

Yes, I was really fun to hang out with.

As a child, I wondered why my sister could make friends and keep them so easily, while I could not. It would take me years to discover this. And now, as a public service I am sharing with you, my fellow geek friends, what I learned.

Whoever pulls a "well, actually" almost always shifts the conversation to himself. And now we are no longer following along with your friend's joke, we get to learn how much more you know about the limitations of the Sun Protection Factor scale in sunblock products.

You are doing it wrong

As a seasoned engineer, you need to learn control your impulses. Having dealt with my own well, actually problem, I can attest that adjusting this social behavior might even get you laid.

Jokes are funny because they surprise us. But a joke is not funny if you have to present a 30-page document setting up every little detail. An ill-placed "Well, actually" will get your colleagues to abandon in an instant the water cooler conversation and escape to the peaceful solitude of their workstations.

You can find full-time well-actually folks both in person or monitoring your every quip on twitter.

Even the most rudimentary of the well-actuallistas is able to spoil even the best Ricky Gervais material.

Twitter being a medium limited to 140 character is like catnip for patronizing douchebags. They can not resist the urge to point out logic flaws in your minimalist observation.

This is particularly a problem for those of us that love to tweet things that amuse us or that we find amusing. Fear of a barrage of factoids from an omitted detail can be paralyzing.

Dealing with the Well Actually crowd

The well-actually crowd wants as much as everyone else to participate in the conversation. They want to be loved.

But instead of rolling with the punches and participating in a brainstorm of ideas and exploding humor, they contribute interruptions, facts and details that merely produce stop energy on an ongoing discussion. They turn the center of attention towards them.

The well-actually crowd means well. They want to be loved, they just have not realized that they are undermining their own quest for friends.

If you are a sagacious well-actuallista you need to understand that you are not outwitting anyone. It takes more intelligence to build a joke, tell a funny anecdote or narrate a gripping story than it takes to nitpick.

You are not impressing anyone with your hard earned encyclopedic knowledge that you obtained by spending hours on the Internet. You are just making everyone around you realize that you are as much fun to have lunch with as a flaming turd in a bag.

Those of us in the receiving end of a well-actually, need to start an awareness campaign. Perhaps using Twibbons to cure this disease. Unlike many diseases, this awareness program will lead to a cure.

While being technically correct is the best kind of correct, what you don't realize is that while you enjoy the triumph of your well-actually, everyone around you is secretly hoping that you choke on a bucket of cocks.

In the office, we have lots of talented engineers and at one point or another one of us will interject a well placed "well, actually" at an innapropriate moment.

These days we are fully aware of this social disease and we strive to avoid it. When someone interrupts a discussion with a well-actually you can hear someone say:

"Did you just well-actually me?"

Which is basically a way of saying "That has nothing to do with the topic, but thanks for derailing us" without having to go into the explanation and getting lost on the tangent.

This is a good first step. In our case, we have printed copies of the Ok, It's Time To Explain Some Stuff Patronizing Douchebag Trollcat in two sizes: a full-size well-actually cat, and a small one that is given as an award to the douchiest interruption: 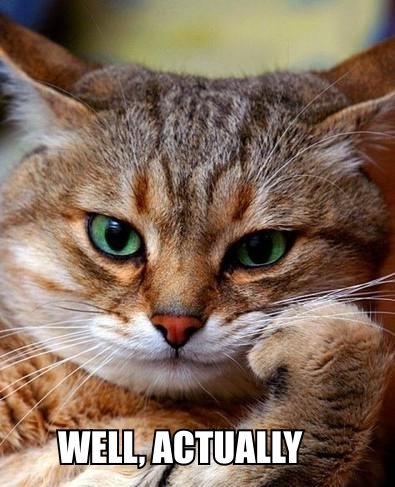 On the Internet, you can try to point the patronizing douchebag to this blog post. Or if you have no patience, just click "block" on twitter.