Kid's Games on the iPad

We have gotten a bunch of baby games, kids games and visualizations for her.

But many of these apps have one fundamental issue: the author adds one or more buttons with useless stuff like "Provide Feedback", "Info", "Visit Web Site", "Check my Other Apps" and other assorted buttons on the screen: 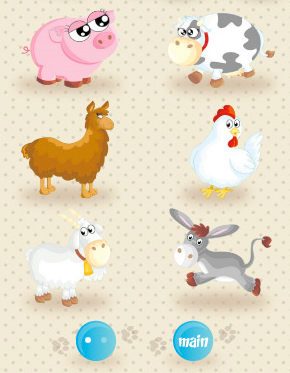 Now, perhaps the apps did great when used by a professional QA team in Daytona that reported back "yes, every animal in the app makes the proper sound, and the cows scroll as they are intended to".

In this case, the "Main" button, will bring up a convenient page with options to send feedback to the author, to visit his web site and check out his other apps.

This means that my daugther can not really enjoy her games without supervision, since every few seconds, she will end up visiting a web site in Safari.

Joseph has a similar problem, he has equipped both of his kids with iPads, and they routinely report "the iPad broke", every time one of their games ends up in some lame web site for the developer.

Developers for kid games should use slider switches if they really want to impose their hooks into their customers.

On twitter Paul Hudson suggested a couple of games for 1-year olds: Uzu (my daughter also loves this one), BeBot and SoundTouch.

I have found that she likes GarageBand a lot (we just have to be around to make sure we can reset the screen when she changes instruments).