The MonoGame Team has been working on adding Windows 8 Metro support to MonoGame.

This will be of interest to all XNA developers that wanted to target the Metro AppStore, since Microsoft does not plan on supporting XNA on Metro, only on the regular desktop.

The effort is taking place on IRC in the #monogame channel on irc.gnome.org. The code is being worked in the develop3d branch of MonoGame.

For a couple of weeks I have been holding off on posting about how to contribute to Mono, since I did not have a good place to point people to.

Gonzalo has just updated our Status pages to include the differences betwee .NET 4.0 to .NET 4.5, these provide a useful roadmap for features that should be added to Mono.

This in particular in the context of ASP.NET 4.5, please join us in [email protected].

This is a trivial change to implement, and would turn what today is an error into useful behavior.

The reason is that the compiler returns a copy of the "bounds" structure and making changes to the returned value has no effect on the original property.

If we had used a public field for Bounds, instead of a property, the above code would compile, as the compiler knows how to get to the "Bounds.X" field and set its value.

My suggestion is to alter the C# compiler to turn what today is considered an error when accessing properties and doing what the developer expects.

The compiler would rewrite the above code into:

Additionally, it should cluster all of the changes done in a single call, so:

Will be compiled as:

To avoid calling the setter for each property set in the underlying structure.

The change is trivial and wont break any existing code.

Can JITs be faster?

Herb Sutter discusses in his Reader QA: When Will Better JITs save Managed Code?:

In the meantime, short answer: C++ and managed languages make different fundamental tradeoffs that opt for either performance or productivity when they are in tension.

This is a 199x/200x meme that’s hard to kill – “just wait for the next generation of (JIT or static) compilers and then managed languages will be as efficient.” Yes, I fully expect C# and Java compilers to keep improving – both JIT and NGEN-like static compilers. But no, they won’t erase the efficiency difference with native code, for two reasons.

First, JIT compilation isn’t the main issue. The root cause is much more fundamental: Managed languages made deliberate design tradeoffs to optimize for programmer productivity even when that was fundamentally in tension with, and at the expense of, performance efficiency. (This is the opposite of C++, which has added a lot of productivity-oriented features like auto and lambdas in the latest standard, but never at the expense of performance efficiency.) In particular, managed languages chose to incur costs even for programs that don’t need or use a given feature; the major examples are assumption/reliance on always-on or default-on garbage collection, a virtual machine runtime, and metadata.

This is a pretty accurate statement on the difference of the mainstream VMs for managed languages (.NET, Java and Javascript).

Designers of managed languages have chosen the path of safety over performance for their designs. For example, accessing elements outside the boundaries of an array is an invalid operation that terminates program execution, as opposed to crashing or creating an exploitable security hole.

But I have an issue with these statements:

Second, even if JIT were the only big issue, a JIT can never be as good as a regular optimizing compiler because a JIT compiler is in the business of being fast, not in the business of generating optimal code. Yes, JITters can target the user’s actual hardware and theoretically take advantage of a specific instruction set and such, but at best that’s a theoretical advantage of NGEN approaches (specifically, installation-time compilation), not JIT, because a JIT has no time to take much advantage of that knowledge, or do much of anything besides translation and code gen.

In general the statement is correct when it comes to early Just-in-Time compilers and perhaps reflects Microsoft's .NET JIT compiler, but this does not apply to state of the art JIT compilers.

Optimizing compilers introduce a series of steps that alter their inputs to ensure that the semantics described by the user are preserved while generating better code: 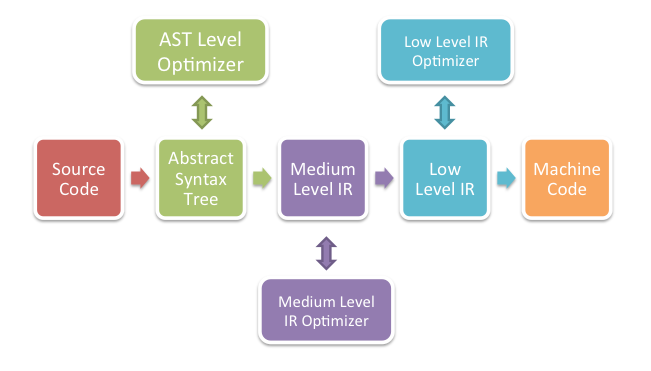 An optimization that could be performed on the high-level representation would transform the textual "5 * 4" in the source code into the constant 20. This is an easy optimization that can be done up-front. Simple dead code elimination based on constant folding like "if (1 == 2) { ... }" can also be trivially done at this level.

An optimization on the medium representation would analyze the use of variables and could merge subexpressions that are computed more than once, for example:

Would be transformed by the compiler into:

A low-level optimization would alter a "MULTIPLY REGISTER-1 BY 2" instruction into "SHIFT REGISTER-1 ONE BIT TO THE LEFT".

The second step loads this file and generates the native code. This is similar to purchasing frozen foods from the super market, you unwrap the pie, shove it in the oven and wait 15 minutes:

Saving the intermediate representation and shipping it off to a new system is not a new idea. The TenDRA C and C++ compilers did this. These compilers saved their intermediate representation into an architecture neutral format called ANDF, similar in spirit to .NET's Common Intermediate Language and Java's bytecode. TenDRA used to have an installer program which was essentially a compiler for the target architecture that turned ANDF into native code.

Essentially JIT compilers have the same information than a batch compiler has today. For a JIT compiler, the problem comes down to striking a balance between the quality of the generated code and the time it takes to generate the code.

Java HotSpot takes a fascinating approach: they do a quick compilation on the first pass, but if the VM detects that a piece of code is being used a lot, the VM recompiles the code with all the optimization turned on and then they hot-swap the code.

.NET has a precompiler called NGen, and Mono allows the --aot flag to be passed to perform the equivalent process that TenDRA's installer did. They precompile the code tuned for the current hardware architecture to avoid having the JIT compiler spend time at runtime translating .NET CIL code to native code.

In Mono's case, you can use the LLVM optimizing compiler as the backend for precompiling code, which produces great code. This is the same compiler that Apple now uses on Lion and as LLVM improves, Mono's generated code improves.

NGen has a few limitations in the quality of the code that it can produce. Unlike Mono, NGen acts merely as a pre-compiler and tests suggest that there are very limited extra optimizations applied. I believe NGen's limitations are caused by .NET's Code Access Security feature which Mono never implemented [1].

[1] Mono only supports the CoreCLR security system, but that is an opt-in feature that is not enabled for desktop/server/mobile use. A special set of assemblies are shipped to support this.

Java, JavaScript and .NET have chosen a path of productivity and safety over raw performance.

This means that they provide automatic memory management, arrays bounds checking and resource tracking. Those are really the elements that affect the raw performance of these languages.

>Alias analysis is simpler as arrays are accessed with array operations instead of pointer arithmetic.

Intent: with the introduction of LINQ in C#, developers can shift their attention from how a particular task is done to expressing the desired outcome of an operation. For example:

Can be expressed now as:

Both managed compilers and JIT compilers can take advantage of the rich information that is preserved to turn the expressed intent into an optimized version of the code.

Extend VMs: Just like Javascript was recently extended to support strongly typed arrays to improve performance, both .NET and Java can be extended to allow fewer features to be supported at the expense of safety.

.NET could allow developers to run without the CAS sandbox and without AppDomains (like Mono does).

Both .NET and Java could offer "unsafe" sections that would allow performance critical code to not enforce arrays-bounds-optimization (at the expense of crashing or creating a security gap, this can be done today in Mono by using -O=unsafe).

.NET and Mono could provide allocation primitives that allocate objects on a particular heap or memory pool:

Limiting Dynamic Features: Current JIT compilers for Java and .NET have to deal with the fact that code can be extended dynamically by either loading code at runtime or generating code dynamically.

On iOS and other platforms it is not possible to generate code dynamically, so code generators could trivially devirtualize, inline certain operations and drop features from both their runtimes and the generated code.

More Intrinsics: An easy optimization that JIT engines can do is map common constructs into native features. For example, we recently inlined the use of ThreadLocal<T> variables. Many Math.* methods can be inlined, and we applied this technique to Mono.SIMD.