For many years, I have learned various subjects (mostly programming related, like languages and frameworks) purely by reading a book, blog posts or tutorials on the subjects, and maybe doing a few samples.

In recent years, I "learned" new programming languages by reading books on the subject. And I have noticed an interesting phenomenon: when having a choice between using these languages in a day-to-day basis or using another language I am already comfortable with, I go for the language I am comfortable with. This, despite my inner desire to use the hot new thing, or try out new ways of solving problems.

I believe the reason this is happening is that most of the texts I have read that introduce these languages are written by hackers and not by teachers.

What I mean by this is that these books are great at describing and exposing every feature of the language and have some clever examples shown to you, but none of these actually force you to write code in the language.

Compare this to Scheme and the book "Structure and Interpretation of Computer Programs". That book is designed with teaching in mind, so at the end of every section where a new concept has been introduced, the authors have a series of exercises specifically tailored to use the knowledge that you just gained and put it to use. Anyone that reads that book and does the exercises is going to be a guaranteed solid Scheme programmer, and will know more about computing than from reading any other book.

In contrast, the experience of reading a modern computing book from most of the high-tech publishers is very different. Most of the books being published do not have an educator reviewing the material, at best they have an editor that will fix your English and reorder some material and make sure the proper text is italicized and your samples are monospaced.

When you finish a chapter in a modern computing book, there are no exercises to try. When you finish it, your choices are to either take a break by checking some blogs or keep marching in a quest to collect more facts on the next chapter.

During this process, while you amass a bunch of information, at some neurological level, you have not really mastered the subject, nor gained the skills that you wanted. You have merely collected a bunch of trivia which most likely you will only put to use in an internet discussion forum.

What books involving an educator will do is include exercises that have been tailored to use the concepts that you just learned. When you come to this break, instead of drifting to the internet you can sit down and try to put your new knowledge to use.

Well developed exercises are an application of the psychology of Flow ensuring that the exercise matches the skills that you have developed and they guide you through a path that keeps you in an emotional state ranging that includes control, arousement and joy (flow).

Back in 1988 when I first got the first edition of the "C++ Language", there were a couple of very simple exercises in the first chapter that took me a long time to get right and they both proved very educational.

The first exercises was "Compile Hello World". You might think, that is an easy one, I am going to skip that. But I had decided that I was going to do each and every single of one of the exercises in the book, no matter how simple. So if the exercise said "Build Hello World", I would build Hello World, even if I was already seasoned assembly language programmer.

It turned out that getting "Hello World" to build and run was very educational. I was using the Zortech C++ compiler on DOS back, and getting a build turned out to be almost impossible. I could not get the application to build, I got some obscure error and no way to fix it.

It took me days to figure out that I had the Microsoft linker in my path before the Zortech Linker, which caused the build to fail with the obscure error. An important lesson right there.

The second exercise that I struggled with was a simple class. The simple class was missing a semicolon at the end. But unlike modern compilers, the Zortech C++ compiler at the time error message was less than useful. It took a long time to spot the missing semicolon, because I was not paying close enough attention.

Doing these exercises trains your mind to recognize that "useless error message gobble gobble" actually means "you are missing a semicolon at the end of your class".

More recently, I learned in this same hard way that the F# error message "The value or constructor 'foo' is not defined" really means "You forgot to use 'rec' in your let", as in:

That is a subject for another post, but the F# error message should tell me what I did wrong at a language level, as opposed to explaining to me why the compiler is unable to figure things out in its internal processing of the matter.

Nowadays we are cranking books left and right to explain new technologies, but rarely do these books get the input from teachers and professional pedagogues. So we end up accumulating a lot of information, we sound lucid at cocktail parties and might even engage in a pointless engineering debate over features we barely master. But we have not learned.

Coming up with the ideas to try out what you have just learned is difficult. As you think of things that you could do, you quickly find that you are missing knowledge (discussed in further chapters) or your ideas are not that interesting. In my case, my mind drifts into solving other problems, and I go back to what I know best.

Please, build exercises into your books. Work with teachers to find the exercises that match the material just exposed and help us get in the zone of Flow.

Non-government controlled currency systems are now in vogue. Currencies that are not controlled by some government that might devalue your preciously earned pesos at the blink of an eye.

BitCoin is powered by powerful cryptography and math to ensure a truly digital currency. But it poses significant downsides, for one, governments can track your every move, and every transaction is stored on each bitcoin, making it difficult to prevent a tax audit in the future by The Man.

Today, I am introducing an alternative currency system that both keeps the anonymity of your transactions, and is even more secure than the crypto mumbo jumbo of bitcoins.

Today, I am introducing the MigCoin.

Like bitcoins, various MigCoins will be minted over time, to cope with the creation of value in the world.

Like bitcoins, the supply of MigCoins will be limited and will eventually plateau. Like bitcoin, the MigCoin is immune to the will of some Big Government bureaucrat that wants to control the markets by printing or removing money from circulation. Just like this: 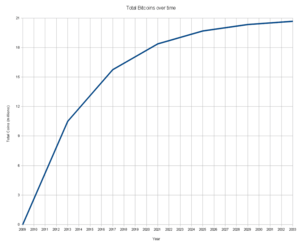 Projected number of Bitcoins and MigCoins over time.

Unlike bitcoins, I am standing by them and I am not hiding behind a false name.

Like BitCoins, MigCoins come with a powerful authentication system that can be used to verify their authenticity. Unlike BitCoins, they do not suffer from this attached "log" that Big Brother and the Tax Man can use to come knocking on your door one day.

How does this genius of a currency work? How can you guarantee that governments or rogue entities wont print their own MigCoins?

The answer is simple my friends.

MigCoins are made of my DNA material.

Every morning, when I wake up, for as long as I remain alive, I will spit on a glass. A machine will take the minimum amount of spit necessary to lay down on a microscope slide, and this is how MigCoins are minted.

Then, you guys send me checks, and I send you the microscope slides with my spit.

To accept MigCoins payments all you have to do is carry a DNA sequencer with you, put the microscope slide on it, press a button, and BAM! 10 minutes later you have your currency validated.

To help accelerate the adoption of MigCoins, I will be offering bundles of MigCoins with the Ilumina MiSeq Personal DNA sequencer: Some might argue that the machine alone is 125,000 dollars and validating one MigCoin is going to set me back 750 dollars.

We are going to need a few of you to put some extra pesos early on to get the prices to the DNA machines down.

I will partner with visionaries like these to get the first few thousands sequencers built and start to get the prices down. Then we will hire that guy ex-Apple guy that was CEO of JC Penney to get his know-how on getting the prices of these puppies down.

Like Bitcoin, I expect to see a lot of nay-sayers and haters. People that will point out flaws on this system. But you know what?

The pace of innovation can not be held back by old-school economists that "don't get it" and pundits on CNN trying to make a quick buck. Hater are going to hate. 'nuff said.

Next week, I will be launching MigXchange, a place where you can trade your hard BitCoins for slabs of spit.

Join the revolution! Get your spit on!