Mono has a pure C# implementation of the Windows.Forms stack which works on Mac, Linux and Windows. It emulates some of the core of the Win32 API to achieve this.

While Mono's Windows.Forms is not an actively developed UI stack, it is required by a number of third party libraries, some data types are consumed by other Mono libraries (part of the original design contract), so we have kept it around. 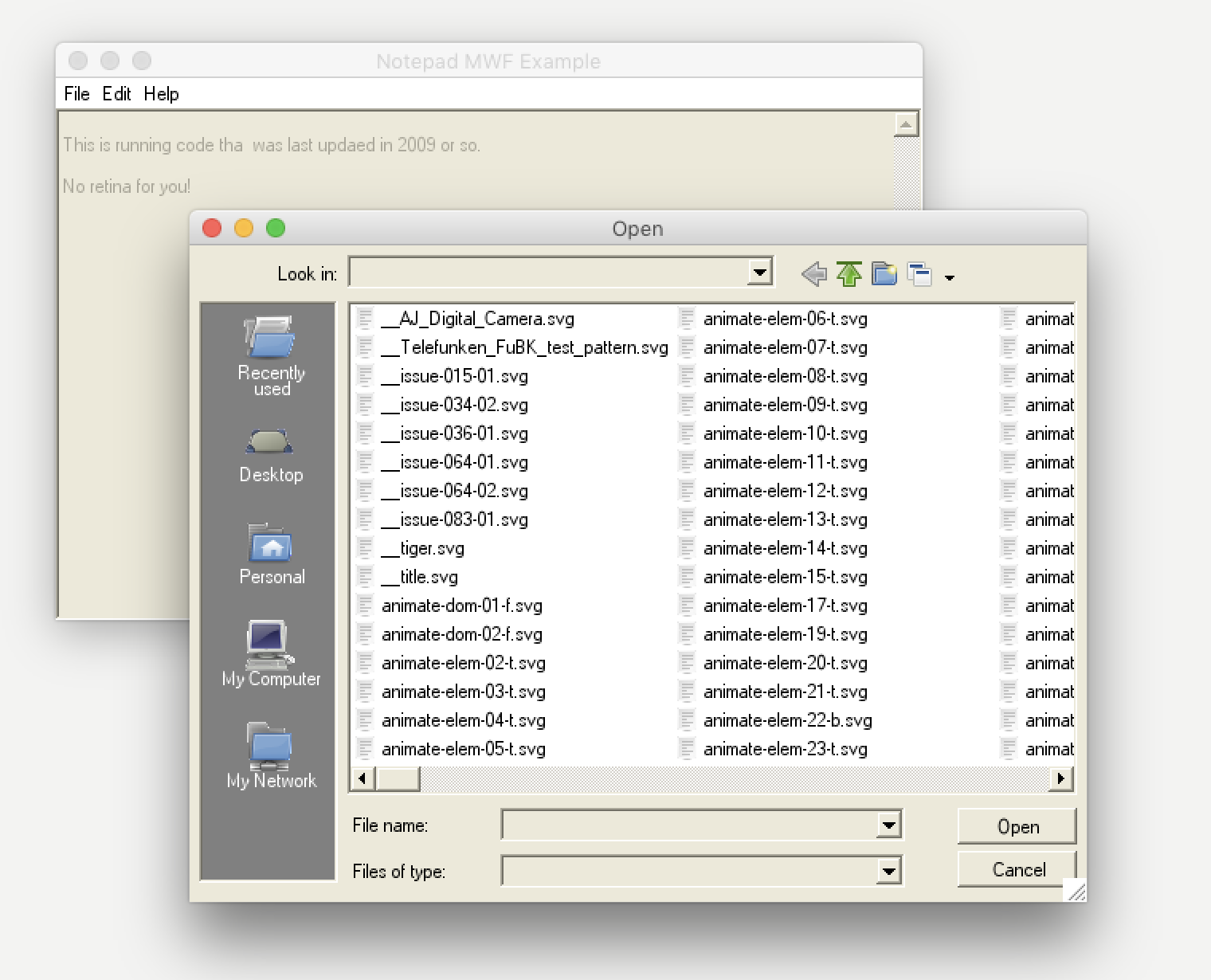 On Mac, Mono's Windows.Forms was built on top of Carbon, an old C-based API that was available on MacOS. This backend was written by Geoff Norton for Mono many years ago.

As Mono switched to 64 bits by default, this meant that Windows.Forms could not be used. We have a couple of options, try to upgrade the 32-bit Carbon code to 64-bit Carbon code or build a new backend on top of Cocoa (using Xamarin.Mac).

For years, I had assumed that Carbon on 64 was not really supported, but a recent trip to the console shows that Apple has added a 64-bit port. Either my memory is failing me (common at this age), or Apple at some point changed their mind. I spent all of 20 minutes trying to do an upgrade, but the header files and documentation for the APIs we rely on are just not available, so at best, I would be doing some guess work as to which APIs have been upgraded to 64 bits, and which APIs are available (rumors on Google searches indicate that while Carbon is 64 bits, not all APIs might be there).

I figured that I could try to build a Cocoa backend with Xamarin.Mac, so I sent this pull request to let me do this outside of the Mono tree on my copious spare time, so this weekend I did some work on the Cocoa Driver.

But this morning, on twitter, Filip Navarra noticed the above, and contacted me:

@migueldeicaza We actually have a working Cocoa backend for Mono SWF (along with lot of fixes that we never ported upstream). It didn't make sense for us to release a big dump, but could be useful for your new effort...

He has been kind enough to upload this Cocoa-based backend to GitHub.

There are a couple of interesting things about this Windows.Forms backend for Cocoa.

The first one, is that it is using sysdrawing-coregraphics, a custom version of System.Drawing that we had originally developed for iOS users that implements the API in terms of CoreGraphics instead of using Cairo, FontConfig, FreeType and Pango.

The second one, is that some controls are backed by native AppKit controls, those that implement the IMacNativeControl interface. Among those you can find Button, ComboBox, ProgressBar, ScrollBar and the UpDownStepper.

I will now abandon my weekend hack, and instead get this code drop integrated as the 64-bit Cocoa backend.

While I had promised my friend Lucas that I would build a game in Unity for what seems like a decade, I still have not managed to build one.

Recently Aras shared his excitement for Unity in 2018. There is a ton on that blog post to unpack.

What I am personally excited about is that Unity now ships an up-to-date Mono in the core.

Jonathan Chambers and his team of amazing low-level VM hackers have been hard at work in upgrading Unity's VM and libraries to bring you the latest and greatest Mono runtime to Unity. We have had the privilege of assisting in this migration and providing them with technical support for this migration.

The work that the Unity team has done lays down the foundation for an ongoing update to their .NET capabilities, so future innovation on the platform can be quickly adopted, bringing new and more joyful capabilities to developers in the platform.

With this new runtime, Unity developers will be able to access and consume a large portion of third party .NET libraries, including all those shiny .NET Standard Libraries - the new universal way of sharing code in the .NET world.

If you install the Unity beta today, you will also see that on Mac, it now defaults to Visual Studio for Mac as its default editor.

As Unity upgrades its Mono runtime, they also benefit from the extended debugger protocol support in Mono, which bring years of improvements to the debugging experience.