Spend the first few days in Porto Alegre, with a two day trip to Florianopolis. We are now in Bage, and returning to Porto Alegre tomorrow through Pelotas and Casino. Then next week we head over to Rio to meet with Nat and Alex and spend new years eve there.

Am in Sao Paolo, going to Porto Alegre later tonight. Will go to Florianoponis this week, later Bag� and finally will head over to Rio de Janeiro for new year.

Ettore, my very dear friend passed away yesterday, December 10th, and has left a big void in my life, and the life of his friends, people he worked with, and people he collaborated with. Hard to think that we were exchanging e-mails just a couple of days ago, and that we were discussing photography two weeks ago in New York, and having greek dinner last week.

I first met Ettore in real life in Paris after we had known each other over the internet for over a year. Ettore he had contributed to Gnome the first docking toolbar and for this occasion we arranged to meet in Paris. In that meeting, he outlined his vision for a file manager (gnome-fm) and we designed the first pass at the gnome-vfs. Eventually, these would become Nautilus, today's GNOME file manager.

Ettore did not hesitate to leave his job to join Nat and myself in the adventure that would be Ximian. He was the second employee at Ximian, and started working on turning the HTML engine into a full-blow editor, this work is in active use today in Evolution. Later on, he became the leader for the Evolution project, which is in use now by thousands of users.

The first time I met Ettore, he and Clara cooked for me a new dish that until that point was unknown to me: spaghetti carbonara, which I loved. Year after year, every time I would prepare it, I would remember fondly how they taught me to make it.

Chema was a great loss a month ago, and this comes as a second very hard moment for our group of friends. Terrible moments like this are a reminder that we should enjoy every minute of our lives and cherish the frienships of everyone we know, on the internet and on the real life.

We are going to miss you bambino.

We are getting some pretty sizable contributions to the documentation of Mono through Monodoc.

Jim Hugunin (the creator of Jython) reports that his early .NET compiler for Python is performing very well, in contrast with ActiveState's previous attempt, in some cases better than CPython. It always bothered meb that ActiveState discontinued work, and came to a conclussion on .NET performance rather quickly, with JScript and VB.NET being proofs that better speeds could be achieved.

A copy of Jim's posting is here (the listserv requires a password to read), the details:

The early results with IronPython show that Python compiled to IL can run fast. On the standard pystone benchmark, IronPython-0.1 is 70% faster than CPython-2.3. The numbers for pystone as well as several micro-benchmarks are shown below. For ease of comparison, all times are normalized to Python-2.3. Smaller numbers indicate faster performance.

Good to stop the meme of `.NET is slow for scripting languages'.

Two simple links for the day

The simple joys in life

Someone on the net sent me this: 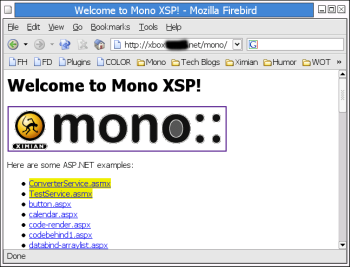 On the other hand, I do not know how I forgot to blog about a real ASP.NET web site running on Mono: http://www.mo8il.com/

I have not seen this reported yet anywhere, but as I was flipping through the pages of the newspapers on the airplane on the way back from Frankfurt, I noticed that Sun has signed a deal with the UK to provide 500,000 of its desktops based on Gnome, OpenOffice, Mozilla and Evolution.

A second batch of congratulations for our competitors/collaborator friends at Sun. They got one million users for GNOME in China. 1.5 million desktops: not bad, not bad at all.

The guys got a very good review from eWeek: Sun Rivals Windows, Office. An interview from a couple of months ago with Jonathan Schwartz is here. This one about their desktop effort.

Here is a review of our own XD2 in Open for Business.

Richard Smith has published an intro to Mono in the Novell CoolSolutions.

Linux Bangalore is over

The conference was awesome. We got to meet a large community of enthusiastic hackers that wanted to participate in Gnome and Mono activities. Nat and myself did in total four presentations, three of them we did together, people really enjoyed the complemented discussion on stage.

Our talks were spaced out so we could spend time to talking to people, which turned out to be a great idea: we spend the three days at the conference answering questions and hopefully giving some helpful hints on how to get involved in open source developement. 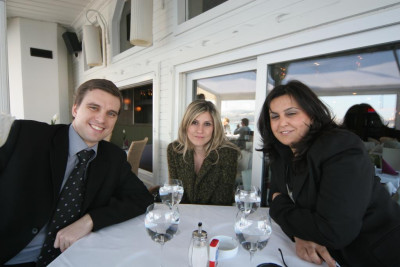 The Novell Booth at Bangalore Linux.

The Novell booth was crowed the whole time, and the Novell team here did a fantastic job, they even had a quiz competition for various open source topics.

The conference so far has been fantastic, it is great to meet so many students and developers who are interested in becoming contributing citizens in the free software world. Yesterday Nat and myself did a couple of joint talks on the desktop. Today was Mono day #1 and the talk covered the basics: the rationale for Mono, what is available, and the roadmap. 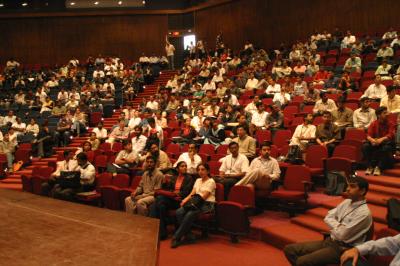 I spent the next five hours talking to various people who were interested in different facets of Mono and open source development. The Novell booth was packed, and the guys manning the booth were overloaded with questions about the desktop, the bounties (which we are promoting here for the first time in public) and Gnome Bangalore (which was just launched).

Naba Kumar of Anjuta fame has a boot all for himself to demo Anjuta and the locally built PDA is also being displayed on the show. Another important project at the show was the IndLinux effort: they have been working on translating Gnome to ten different Indian languages: 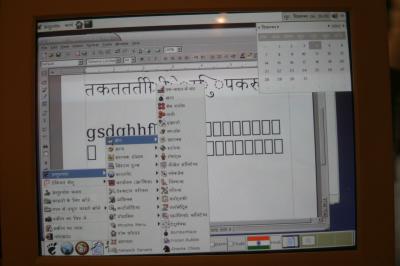 Tomorrow we are doing another joint presentation, this time on rapid application development with Mono. We have a little surprise prepared for this one.

Mono 0.29 has been released

This release took us a long time to go out, but it is pretty exciting, with PPC supported. The best Mono release ever!

Today I do my first Mono presentation at the Bangalore Linux event. I helped Nat with two of the Gnome presentations yesterday at the event, those were fun.