A very pleasant journey to Bangalore. At the lounge in Boston they had Champagne and Burritos: 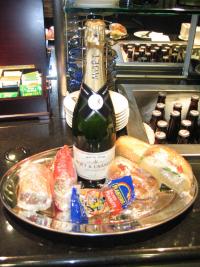 Champagne and Burritos For the Traveling Connoisseur.

During the six hour layover in the Frankfurt airport, I did some low-hanging-fruit hacking: reduced MCS compilation times and memory usage a bit more. On the airplane I managed to get Gtk# using Cairo# which required fixing various Cairo# issues, and adding some custom features to Gtk#. Will check those in, once we decide on the new name for the `CairoState' object, which we currently call `Cairo.Object' which is just not right. 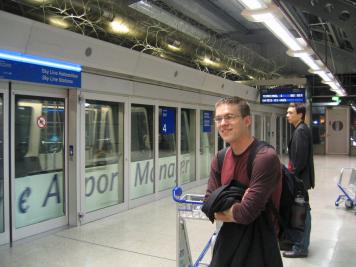 Barb wire, keeping someone out of something.

Following the steps of PlanetGnome, Novell now has an aggregated service of Novell blogs at Planet Novell

Added some helper buttons to assist the folks writing documentation with Monodoc, also we have now activated the Monodoc editing web service, so those users that are using Monodoc CVS are now able to send their contributions back from the GUI.

Am taking a plane to Bangalore in a few hours. This trip is to meet with my colleagues at Novell/Bangalore who will be working in Mono (starting next week) and also to attend the Bangalore Linux Conference. Will be talking about Mono as a development platform, and meeting with some of the existing contributors to Mono and Gnome that have e-mailed me.

On my way back, am planning on stopping by Germany and Spain, but the exact dates and locations have not been sorted out yet.

The Mono team is in good hands, with a flury of activity on every corner: we are advancing quickly on completing the .NET 1.1 APIs for the Mono 1.0 release, and a few team members have been amusing themselves implementing features from the .NET 1.2 release.

As I write this, am migrating my album from my mPhoto software to Ettore's F-Spot photo management application (both written in C#, but Ettore has done a much better job than I did with mPhoto ;-).

Lastly, I have been playing with Cairo in Gtk#, and having a fun time using it from C#, it needs a bit of loving which am going to be doing on the airplane, and will have something to check in when I land in India.

My friend Mancha (Fernando Magari�os) worked for two years on and off doing the typography for a physics book in Mexico, and the book was just awarded the prize for the best typesetting, layout and editing in Mexico.

Mancha composed the book with TeX. Will post links when I have them.

Congratulations to Sun on getting the deal with the government of China. We are competitors, but still the software they are delivering is open source.

I know various of the hackers and developers at Sun that have worked hard on this: on Gnome, in OpenOffice and Java, and I am glad that their hard work is going to in such a large deployment.

A few years ago, we met with John Heard and Marco Boerries who were working on various angles of Sun on the desktop. It was back then that John had seen a future for Gtk+ as an ISV platform, and that Marco would bring up the idea of open sourcing StarOffice (which we have been very excited about contributing to). They wanted to see Gnome mature: and they were two important driving forces for the establishment of the Gnome Foundation. Through all these years of work, Sun has funded big parts of development of various components of the open source.

Despite all the criticism they get from Jonathan Schwartz quotes about Linux, Sun is a massive contributor to the open source pool. OpenOffice alone is a big chunk of functionality. But their daily involvement in Gnome 2 has been a pleasure to watch: they were the first to push Gnome to be fully accessible to comply with government regulations.

Anyways, good luck to our competitors. Tonight is a big win: at least 1.3 billion people will be running Evolution.

Microsoft announced the specs for the XML markup for Office, and they are royalty free. The actual license text contains:

It appears that the above *might* be incompatible with the GPL. It sounds like the BSD advertisement requirement. Further study is needed to really understand the issues.

Chema Celorio, we will miss you

Chema Celorio, a good friend for the past four years died yesterday on a skydiving accident in Mexico City.

The Gnome folks might remember Chema for taking over gEdit, the Gnome Printing platform and later on managing the Ximian team in Mexico and the Ximian Desktop effort. He was became famous for being the #1 bug reporter to Gnumeric, and a close friend to everyone that met him.

He helped bring newbies by fueling the Gnome-Love project, a project, where developers would be hand-hold, and no question was too simple to be asked.

Chema was passionate about skydiving, technology and free software. He was preparing for a mexican record of skydiving in the upcoming weeks. We had dinner frequently when he was in town, and he would always ask the right questions, and make us laugh all.

Just two weeks ago Maria and I had him for dinner at home, and we taught him to cook crepes. We will miss him.

There is a skydiver's forum: in Mexico.

Chema was thinking about moving to Europe.

Nat has a picture of Chema last year at the Cave.

Back from the PDC

Am back in Boston from the PDC. Lots of improvements to the .NET Framework in the short-term, and some very interesting but still early work for the long term.

Will post all my notes on Monday, once I decompress.