Jb Evain has two screenshots about the new IL disassembler: here and here

Tomboy has been updated to work with Mono 1.1.4 (Mono's 1.0 C# compiler allowed for invalid code to be compiled).

Eugenia put together a large list of Gtk#/Mono-based applications.

If you are using Mono from SVN you can use `xsp2' to try Lluis' latest work on supporting ASP.NET 2 features: dynamic menus, trees, master pages and the beginning of the grid control are in now.

I have updated NPlot/Gtk# to the latest version of NPlot, the tarball is here

F-Spot smoother than ever 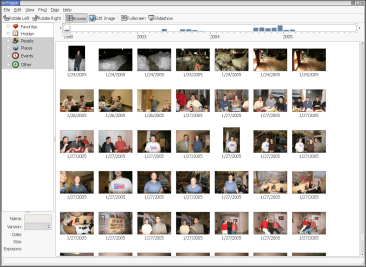 I got four gigabytes worth of compact flash cards and two digital cameras for my trip to Istanbul and Beirut. The problem is where to backup all this data.

I have seen that there is a plug for the iPod that downloads compactflash images into the ipod. This is almost ideal (I can use my old ipod). But are there other things I should be looking at for backing up photos while traveling?

Send your recommendations to [email protected]

Been busy moving the Mono Web Site to MediaWiki, following the footsteps of the Hula project.

There's a document called The Essentials of Post Cold War Deterrence that was released during the Clinton years by the Strategic Command, which is in charge of nuclear weapons. It's one of the most horrifying documents I've ever read. People haven't paid attention to it.

The PDF to the above document is available here.

RMS has some interesting comments on his blog about Hugo Chavez (president of Venezuela).

Greg Palast did an interview with Hugo Chavez after the failed coup. Various tid-bits about the events from last year.

The World Social Forum in Brazil this year had Hugo Chavez as one of the speakers, it was packed: 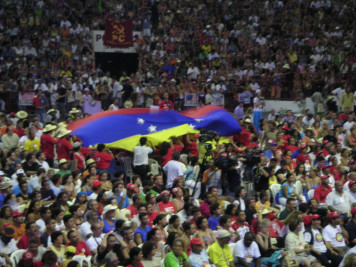 At the Chavez Presentation. 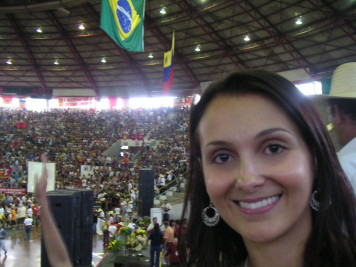 Next week I will be heading to the Turkish Open Source Days in Istanbul. I will be talking about the Gnome desktop and the Mono project there. The program for the event is here

Since I was in the neighborhood, I decided to swing by Beirut and Maria Laura is meeting me there a few days after. The local Linux user group is setting up a small presentation at the American University.

With Mono 1.1.4 we shipped our first VM with the support required to implement sandboxing. We have yet to deploy all the attributes on the libraries to have a useful sandbox for users.

Sebastien has written two articles on this: here and here.

Update: Sebastien has posted a third article on the sandbox.

In Mexico the federal government is doing everything on its power to avoid the most threatening candidate to the incumbent party to run. They are doing this by using a loophole in the election process which will prevent the candidate from running for office. The story has been developing for a few months, and a summary of it is available here.

President Fox and a judge from the supreme court have been caught conspiring against the candidate (Andrés Manuel López).

Erik added me as his buddy on the Amazon insta-ship program so I do not have to pay for shipping and handling for 2-day delivery.

Its been a crazy last couple of days.

New York Times on their staged "Daily Show": "By my count, "Jeff Gannon" is now at least the sixth "journalist" (four of whom have been unmasked so far this year) to have been a propagandist on the payroll of either the Bush administration or a barely arms-length ally like Talon News while simultaneously appearing in print or broadcast forums that purport to be real news."

"The money that paid for both the Ryan-Garcia news packages and the Armstrong Williams contract was siphoned through the same huge public relations firm, Ketchum Communications, which itself filtered the funds through subcontractors. A new report by Congressional Democrats finds that Ketchum has received $97 million of the administration's total $250 million P.R. kitty, of which the Williams and Ryan-Garcia scams would account for only a fraction. We have yet to learn precisely where the rest of it ended up."

More on the uncovering of Jeff Ganon: here. 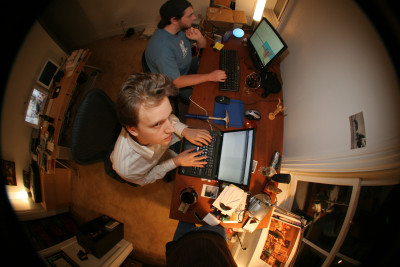 From diffstat for the last month of Mono activity on the SVN repository (excluding deprecated code):

Geoff describes how to run your Windows.Forms applications on OSX here. The short story: you must use the new `macpack' tool to create an OSX bundle.

He also has a screenshot of Alexsander Olk's new color dialog here running on OSX.

We finally released Mono 1.1.4 and Mono 1.0.6. With this release we are recommending users to switch to the 1.1.x branch, as our automated testing and regression suites are much better than they ever were on 1.0.6.

The runtime is faster, smaller, leaner and we have fixed many bugs and architectural problems that were hard to backport to 1.0.6.

Programmers that have only been using Mono, and have not tested their code on .NET should keep an eye open for a few problems that might be exposed with the stricter 1.1.4 runtime:

The performance difference is very visible on web-based applications. Our documentation system for example is now instantaneous.

We have also started distributing DB4Objects from Mono's web site. For those of you that are missing ObjectSpaces, you might find db4o not only interesting, but faster than what ObjectSpaces could have been.

We have included Paco's prj2make on the latest release of Mono. prj2make is a tool that produces Makefiles from Visual Studio or MonoDevelop solutions. Specially convenient if you download some random code from the network.

This is the first release that ships with the security sandbox infrastructure, Sebastien has the full story.

Last week SHA1 was broken. Because of this Sebastien is trying to get users to vote for incorporating SHA-224 into the Framework, see the details here. Mono users can use the Mono.Security stack that ships with this and more.

Installers: The folks at RawByte.com have been kind enough to package Mono with an installer that will work on all Linux systems. Many users love this, specially those without Red Carpet or Yum, as they only have to download a single binary and they get the whole system setup: Mono, all the class libraries, Gtk# and XSP. Like our Windows installer.

There are two downsides to using the installer: for those using distributions with package management, the installer wont register Mono on the system, which means that third-party components that depend on Mono will still want RPM packages installed (or people have resorted to use the --force parameter for RPM). The second downside is that this ships a Mono configured for the smallest common denominator, so speed will suffer as Mono does not use the __thread-based local storage and has to go through a slower (but backwards compatible) system.

Hula's launch has been very successful. The Hula Channel is very active: people contributing patches, ports and various folks interested in the dynamic web interface are hanging out there. There is plenty of energy there.

We are planning on following Hula's plan to use MediaWiki as the main page for the site, because updating the Mono web site has always been a bit annoying.

Also, many people read Jamie's posting on Hula and miss-understood that Jamie was actually praising Nat's final direction on Hula, so there are plenty of comments along the lines of `Jamie slams Hula' and `They are clueless, we are not'.

Being very interested in politics, I see this phenomenon as an interesting window into the human soul: if these very smart technical people have problems understanding a post like that, what does that say for people trying to discuss and debate the finer points of public policy?

The Phoenicia hotel seemed to be under construction: image here

I still intend to go to Beirut on vacation with Laura in three weeks.

The origins of Ximian: 1999 interview

Nat found an interview we did in 1999, when Ximian was launched. The inteview is here.

In 1999 we had to rename our company from "International Gnome Support" (IGS) to HelixCode as we feared IBM's stock would dip due to the naming conflict with their own "IBM Global Services" (IGS).

Update: It has been pointed out that our old domain for IGS is not something you want to click on if surrounded by polite company.

There is an interesting interview with Edd Dumbill on his Mono book on a Turkish site.

Gnome memory use in various languages

Paolo has an interesting post on the memory footprint that Gnome applications incur when using Mono. The following table shows the memory usage, Virtual Memory and Resident Set Size for various runtimes running the same simple Gtk+ based application:

The important number to look at is the RSS, the VSIZE is just useful as a reference.

Paolo explores the memory consumption from Mono, as well as a few problems with small libraries.

Update: Paolo provided the numbers for Kaffe and I included his writtable mappings column.

Ahead of Time Compilation

Note that in the numbers above, Mono was running in Just-in-Time compiler mode. One of the things that we have been working on in Mono in the 1.1.x series is improving the produced code for precompiled code. Expect the numbers for our next release to be even closer to C.

The new file format that Zoltan created is designed to maximize the pages that can be shared by using position independent code (PIC). By using PIC code various running Mono applications will share the same pages in memory and only a few pages for each library must be mapped in read-write mode and updated.

This PIC code is typically slower than code that is JIT compiled by Mono. The tradeoff that we are making is that users that run more than one Mono application will benefit by having the Mono applications share more code.

But if performance is more important than memory consumption, users can pass the -O=-aot flag to the Mono runtime. This will disable the use of the Ahead-of-Time compiled code.

The documentation for the new file format lives in mono/docs/aot-compiler.txt

Kevin and Francisco have published an article on Building Mono on Windows.

This article was aimed at folks that are consumers of Mono maybe even contributors of patches and documentation. My approach when collaborating with Kevin Shockey was to give departmental developers a way to build the latest and greatest. These are the folks that may have even reported a bug to the list and gotten a reply like:

The twist on this witting is that the build approach does not use MS .NET Framework, rather uses Mono to build Mono. We will later put out a set of modified instructions to uncomment a couple of lines that we suggest creating on the user's .bashrc file to enable the build using csc.exe rather than mcs.

Eugenia pointed out that "7 out of the 20 top-rated apps on gnomefiles.org are mono apps" in GnomeFiles.

There is a new article over at CodeProject on setting up Mono for .NET users on Linux and Windows.

There is a whole section covering cross-platform development with .NET over there.

Became addicted to Fafblog a few days ago. I started with this post.

Lluis has developed an addin to develop Mono with MonoDevelop.

His blog post has more details on the work that is going into MonoDevelop.