A very impressive set of demos at Mix 07, the 72 hour conversation that Microsoft is having in las Vegas.

The focus was mostly around Silverlight, Microsoft's new web plugin to author rich application and tools used to design this content.

The whole Expression suite was adorable, and Blend is fantastic.

The demos were pretty amazing, Scott built a nice animation for an airline reservation system on stage: 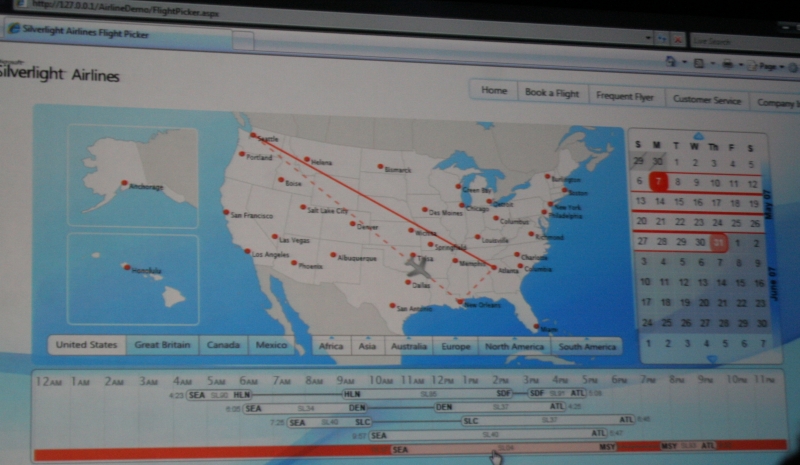 Today Microsoft announced two Silverlight editions: one that went into beta (Silverlight 1.0) and is a relatively simple technology.

Silverlight 1.0 uses a retained graphics system (a canvas) that exposes the internal structure to the browser DOM. It has no scripting capabilities built into it, all the scripting support is actually done by the Javascript interpreter in the browser and all changes are done by talking to a Javascript object exposed by the hosted Silverlight surface.

The scene definition is done using the XAML markup using a subset of the WPF primitives available in the full-blown WPF. Then the big announcement came:

The second edition was Silverlight 1.1, and this one is a different beast altogether. 1.1 extends the model by embedding a complete Common Language Runtime. Here is the slide that Scott used for this part of the presentation: 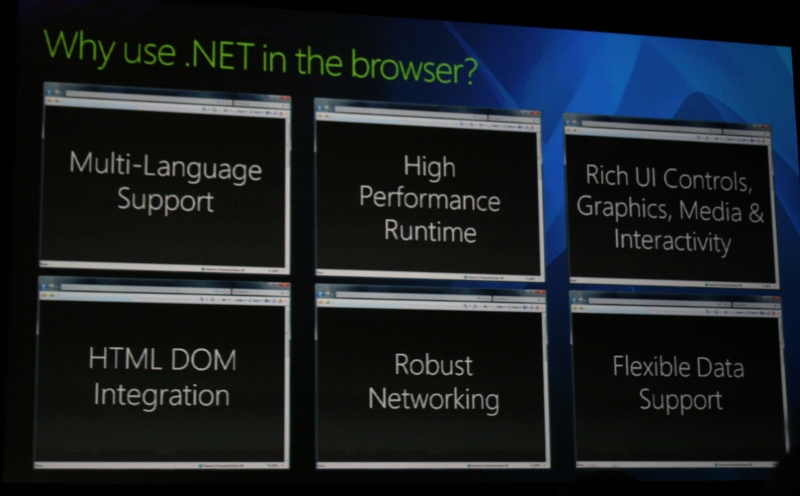 Scott did a demo of a chess program that had logic built with JavaScript and C#, notice the nodes per second computation: 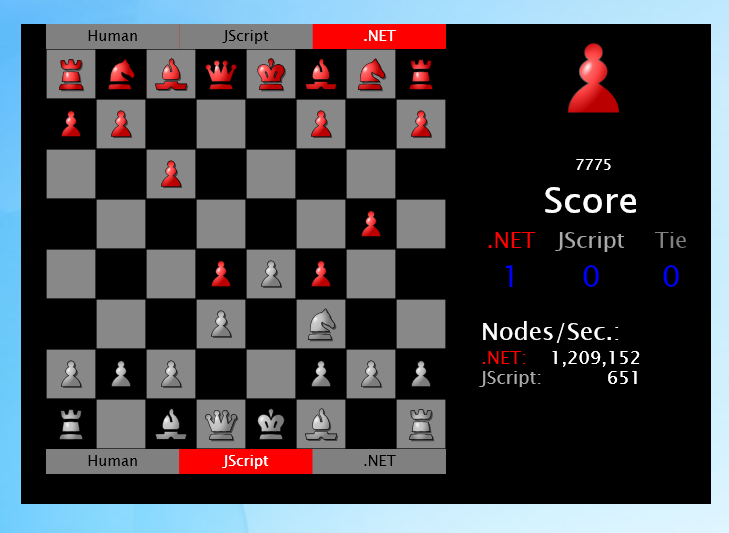 The outcome of the famous battle between dog vs vampire: 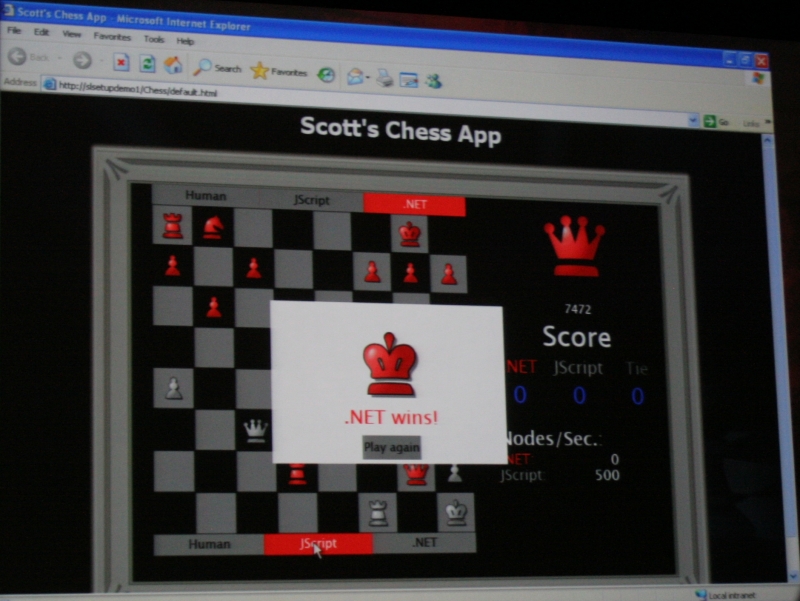 There are a handful of changes to the runtime. Here are some notes on what I found out about it today. It might not be complete nor accurate:

The Dynamic Language Runtime was announced today. Jim Hugunin's blog has the details and rumor is that in the next couple of days/weeks he will be posting on his blogs the technical details behind the design of the DLR. 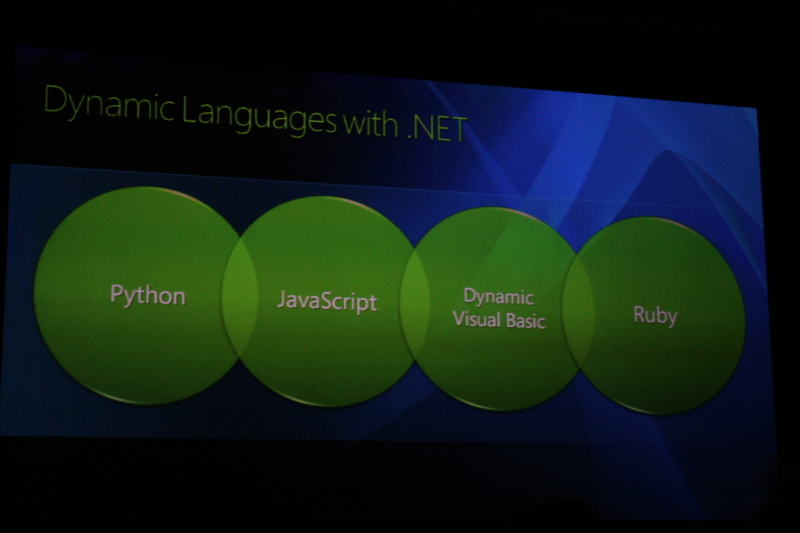 Binaries of the DLR were released today as part of Silverlight 1.1, and the source code was included with IronPython 2.0 (also released today).

The release for the DLR is done under the terms of the Microsoft Permissive License (MsPL) which is by all means an open source license. This means that we can use and distribute the DLR as part of Mono without having to build it from scratch. A brilliant move by Microsoft.

During the keynote they announced support for four dynamic languages built on top of the DLR: Python, JavaScript (ECMAScript 3.0), Visual Basic and Ruby.

The rumor on the halls is that IronPython and Ruby will be released under the MsPL license, while ECMAscript and Visual Basic will continue to be proprietary. From Jim's announcement:

For the short term, our focus is on using a small number of languages to drive the first wave of DLR development where we can work closely and face-to-face with the developers in order to iron out the worst kinks in the DLR design. After this initial phase, we want to reach out to the broader language community. If you're building a language on top of .NET and are interested in supporting dynamic language features then we want your feedback on the DLR. However, I'd discourage you from trying to implement on top of the DLR today. I don't want you to get frustrated trying to work with these really early bits and then not be interested in working with us when we're better prepared to engage with the language community. We plan to kick off a broader engagement with language implementers at the upcoming lang.net conference in three months - at the end of July. This will be the best place to really engage with the DLR and let us know what we got wrong.

For a long time a common question to the Mono team was when we were planning on implementing WPF.

Most people want to hear a date like "tomorrow", "next month", "in a year". But the answer is more complex than just thinking "we can do this in N months".

We as a team have to evaluate the cost of implementing a technology and contrast it with the impact that such technology would have. With our finite development resources (in the Mono community and the companies contributing to it) we have to pick our battles.

And implementing WPF was never really high up on the priority list for a couple of reasons:

So it is fair to say that we currently do not have plans to look at WPF.

But a Mono-based Silverlight is an entirely different story. Unlike WPF that requires people to rewrite their software to take advantage of it, Silverlight is aimed at the Web and it will become a nice complement, a way of spicing up existing web applications without rewriting what already works.

It makes tons of sense for us to start looking at an implementation of Silverlight on Linux with Mono. There is already a XAML loader, it is the perfect excuse to use Antigrain for high-speed graphics and that only leaves the pesky media issue to be solved.

In fact, am kind of happy that Microsoft did not do the port themselves as implementing this sounds incredibly fun and interesting.

The major upside of this show has been how open the Microsoft folks have been open to discuss technicalities of any sorts.

I had the chance of participating on an open source panel at the conference and PHP, Mozilla, SubSonic.NET and Mono were well represented and I did not fell any angry mood from anyone.

There is also a surprising amount of talk about using the MsPL license, again, all good news.

Finally, I also made tons of new friends, have had a great time with everyone I have met here. I also noticed that both Jon Udell and Dave Winer both look happier, they were always smiling,

Someone mentioned (and I forget whom it was) that talk about IE8 was strangely missing from the whole conversation. There were no announcements about new upcoming features in IE, no mention of whether IE8 will support what-wg nor any future plans.

So how did my predictions score?

Which gives me full point, so 5.5 out of 7, I think I fared better than most analysts and pundits. I should become an analyst at RedMonk in my next life.