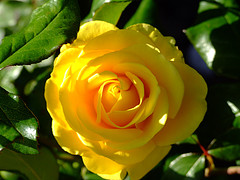 My good friend Robert O'Callahan discusses Silverlight on his latest blog entry, in particular, he asks the question:

No matter how good Silvelright is or how bad the alternatives are, Silverlight domination will be a really bad thing for free software so I question why Miguel wants to push in that direction.

Robert, it is very easy.

I did so because it was free software, and I had decided that I wanted to run my entire system with free software. I felt that dogfooding Linux and improving Linux on a day-to-day basis would help improve this OS as opposed to improving a proprietary OS.

Sure, using a proprietary OS had its benefits: more consistency, more QA, more applications, lots of support, latest video drivers, but they were not free. So I stuck with free software. Today the only proprietary software that I use on my desktop is Flash (I have acrobat installed, but I use Evince instead, keep it for those cases where Evince has a bug).

From my perspective, it is crucial for Linux to have good support for Silverlight because I do not want Linux on the desktop to become a second class citizen ever again.

Robert, you are asking those of us that use FOSS operating systems to "take one for the team" by not endorsing Silverlight, but yet, you are not willing to live among us. If you are going to preach, preach by example.

The core of the debate is whether Microsoft will succeed in establishing Silverlight as a RIA platform or not. You believe that without Moonlight they would not have a chance of success, and I believe that they would have regardless of us.

In fact, I believe strongly that it is part of Microsoft becoming more open and adapting itself to the multitude of shifts in this industry (open sourcing IronPython, IronRuby, the DLR, the JS library for ASP.NET, the MS-PL, the MS-RL, opening up their code, and so on).

Ever since I met Benjamin Zander am a hopeless romantic, and believe in a world of possibility. I find myself to be happier this way than joining these ranks. And what better way of bringing Silverlight to Linux than to work together with Microsoft: they are giving us specs, they are giving us their test suites, and they are providing technical assistance. Its been a pleasure to work with them, and everything we write is open source software, I for one, could not ask for more.

Now, regardless of the strategic discussion about endorsing Silverlight, there are technicalities about Silverlight that make it a fascinating platform. I personally want to write cross platform web applications using C#, Boo, Python and Ruby. And that matters to me, and matters to others.

And I have loved Silverlight since it embedded the CLR runtime. Nothing new there, you can read the gory details of my fascination from back then.

You advocate using standards that are implemented by multiple vendors. But what if none of those vendors is providing what I want? What if the vendors do not care about my opinion?

What we got here is a case of an underserved market.

This is why competition is good. Now Microsoft is providing something that none of the existing web vendors had provided and some of us want. I liked it so much, that I did not hesitate for a second when a journalist asked me whether we would do an OSS implementation of it. "Can I quote you on that?" he said during the coffee break at Mix "Yes, you can".

You talk about Microsoft's control over Silverlight.

What prevents anyone from taking the Moonlight source code, embracing it, extending it, innovate with it, prototype with it, and enter the same cycle that Linux, or web browsers have entered? Or someone turning it into a standard?

The only thing preventing it is lack of imagination.