Mono: What we are Cooking

Although everything we do is public in some form or another, folks that are not keeping track of things might be wondering what the Mono team at Novell has been up to.

Here are some of the projects that we have been working on, and that we expect to release in the next three months, some sooner, some later. You are welcome to join us in testing, all you need is to get comfortable building Mono from git.

Bundling F#, IronPython, IronRuby and UnityScript: Now that all of these languages are open source, we want more people to use them, and we want to remove any friction that there might be in getting started. So we are doing a push to provide packages on Linux and bundle with our OSX installer all of them.

The first three languages are from Microsoft, the third one is from Unity, and it is a strongly-typed and class-based incarnation of JavaScript. The lightweight syntax of Javascript, with the components necessary to produce optimal native code.

Getting F# to build and run on Mono was a challenge on its own. This is not a language that many of us were familiar with, but we are now at a point where things are baked. We should be uploading our modified version of F# to the fsharp organization on GitHub.

MonoDevelop's Git support: MonoDevelop 2.6 will come with Git support. Originally Lluis prototyped this by calling out to the system Git, but this is not very elegant and also hard to make reliable and work smoothly across Windows, Linux and MacOS. So Lluis used db4object's tool to convert Java source code into C# source code to bring Eclipse's jGit into Mono as NGit. Now MonoDevelop has a full managed Git implementation that works the same on Windows, Linux and MacOS.

MonoDevelop's Online Template System: To help developers get up and running with any kind of interesting .NET project, we are going to make MonoDevelop use an online gallery system and we are going to open it up for contributions.

New Profiler: our new profiler is a complete new implementation that obsoletes the old logging profiler, the old heap-shot profiler and the old heap-buddy profiler and our old statistical profiler into a single profiler that does it all, does it better, and does it well.

This new profiler was already used to pinpoint bugs and performance problems in our own web server, our Parallel Frameworks and inspired Alan to write a leak detector for Moonlight.

MonoDevelop's Profiler GUI: The companion to our new profiler. Currently it only has a CPU profiling mode, but in the future we will add a GUI for memory profiling as well.

This has taken longer than we anticipated, but mostly because we are providing a full binding to the Android APIs. Not just a subset. This is made possible by Google publishing the Android API contract in XML form.

WCF: Our WCF implementation so far has been the Silverlight client profiler and its mirror on the server. This is clearly not sufficient for many of our users, so we have redoubled our efforts to fill in all the gaps in WCF. Mono 2.10 will have better coverage for WCF, but it wont be complete. That is still some ways off.

MonoDevelop support for MonoDroid: Currently our entire toolchain is Visual Studio based, just because we figured this is where the majority of developers would be. We are hard at work to bring the same experience to MonoDevelop users on MacOS and Linux.

Upgrade MonoTouch to Mono 2.8: Currently our MonoTouch product is based on our older Mono 2.6 release, and there are too many features in Mono 2.8 that users want.

One feature in particular that we are working on is the use of LLVM's optimizing compiler for Mono on the iPhone. As MonoTouch is entirely batch-compiled and has no JIT, we can use the LLVM backend of Mono instead of our codegen backend to generate smaller and faster code.

And this is only weeks after we pushed our jumbo 3.2.2 release.

Deploy Cecil/Light: Cecil is JB's library that we use every time we need to process ECMA CIL images. Debuggers, compilers, assembly browsers, linkers, mergers, spliters, injectors, decompilers and many other tools in Mono are built with Cecil.

JB has revamped Cecil to be a lot lighter memory-wise, and has improved its API. This new version has been already deployed on most of our master trees in GitHub and will be available to everyone on the next iteration.

C# Compiler to use IKVM Engine: Our C# compiler has historically used System.Reflection.Emit as its code generation engine. We are adding a second backend to the compiler, this time Jeroen Frijters's IKVM.Reflection engine.

This will eliminate the need to have our compilers "bound" to an mscorlib profile. This means that we will no longer need various hacks that we have in place to build special compilers to target special profiles of Mono. Just one compiler for all API profiles.

Hopefully, this time, we will make our documentation editable on the web.

GPU acceleration is based on the fine work from Gallium, and also has made Moonlight's engine more reusable as a general purpose accelerated framework.

Moonlight's RichText control: this is basically a word-processor on a widget. And who better to work on this than Chris Toshok who originally wrote XWord for Unix almost 13 years ago and which lead to the creation of LessTif.

Moonlight Test Suite: We are up to 47.77% of the Silverlight 4 test suite passing. This is a really big number considering that we only started work on Silverlight 4 features very recently. We have been making progress at about 3% every week.

Moonlight Beta: as the stars of codecs, tests and MS-PL code align, we are getting ready to do the first public beta of Moonlight 4 early next year.

MonoMac: we just released MonoMac 0.4 and we are now adding support for creating self-contained application bundles that developers can redistribute themselves or even submit to the Apple AppStore for MacOS.

MonoMac has been a lot of work, mostly, due to popular contributions. There is a nice emerging community of new contributors to Mono that has sparked in the last few weeks.

Garbage Collector Performance Tuning: with Mono 2.8 we shipped our new copying and precise collector and we made it easy for users to try it out (mono --with-gc=sgen). With the information we have collected, we are now improving the reliability and performance of the collector.

Sgen already helped us get up to 30% performance boosts on ASP.NET workloads, and the new results are nothing short of amazing. We can not wait to share this with the world (or you can try it out today by building Mono from master).

System.Xaml: The venerable desktop version of the XAML parser is coming to Mono in our next release.

Precise Stack Scanning for SGen: we have also added support for precise stack scanning that will be useful in a few workloads.

Concurrent GC with SGen: as you can guess, SGen has been great for Mono, and more concurrent configurations of GC scanning will be supported in our next release. Some were disabled in 2.8, some are new.

Moonlight and DeepZoom: we had a decent DeepZoom implementation, but now we have a fabulous one. And by fabulous I mean, we pass Microsoft's tests :-)

Intellisense for Android's markup: Atsushi created a DTD for us to bundle with MonoDroid to let users at least edit their Android UI XML with auto-complete in Visual Studio.

ParallelFX: our parallel FX in Mono 2.8 was the first time that we distributed it. We have been working on improving its performance, distribution and balancing algorithms.

Update: both the ParallelExtra samples gallery and Microsoft Biology Foundation are now runnable.

Monodevelop Addins: Lluis launched the Beta for MonoDevelop's Addins system. You can use this to publish your MonoDevelop add-ins to your users, maintain multiple versions of them and get cute statistics on your add-in.

This is the app-store of MonoDevelop addins, except they are all free. For example, this shows that in the last 7 days, 144 users installed the MonoMac addin: 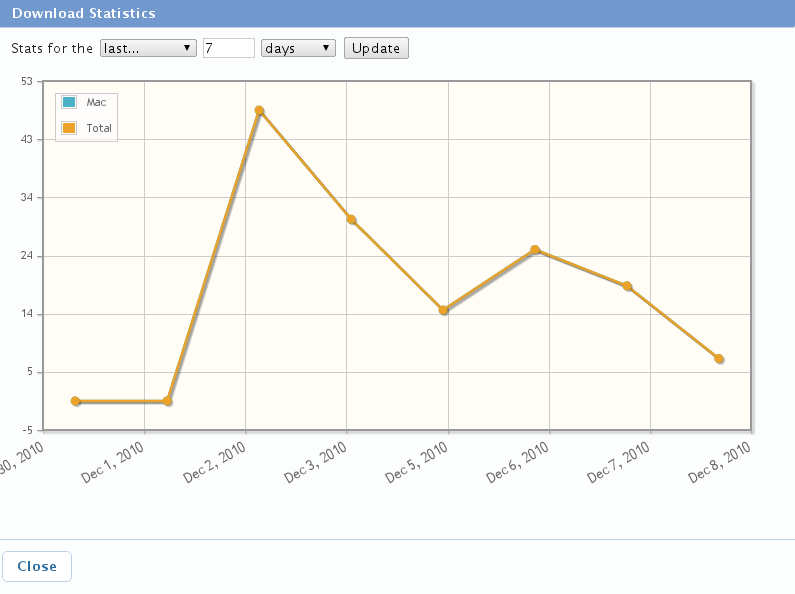 And that is what has kept us busy since the releases of Mono 2.8, Moonlight 2, MonoDevelop 2.4 and MonoTouch 3.2.

January and February will be busy months for us as we release betas for Moonlight 3/4, MonoDevelop 2.6, Mono 2.10 and the official launch of MonoDroid 1.0.