Excited to see the work happening on the Linux consumer space in the MeeGo Universe. There is now a MeeGo 1.0 download available for everyone to try out.

At Novell we have been contributing code, design and artwork for this new consumer-focused Linux system and today both Michael Meeks and Aaron Bockover blog about the work that they have been doing on MeeGo.

You can still get access to the full Banshee UI themed appropriately:

Check Aaron's blog for the details on the design process and the new features coming out for it.

Then, on the Evolution side of things Michael discusses Evolution Express a renewed effort to make Evolution suitable for netbooks. The work done there is amazing, here are some screenshots:

Summary of your tasks on the MeeGo Panel

This is what the new preferences panel looks like:

And finally the calendar:

You can also run existing Mono applications on MeeGo. I give you the photo management application F-Spot:

And this is Jonathan's Pinta painting program built on Mono with Gtk#:

Pinta is fascinating as it shows how much punch can be packed by CIL code. Pinta and all of its effects use 328k of disk space and for distribution it only takes 108k of disk space.

And we are of course very happy to be supporting developers that want to target MeeGo using Windows, Mac or Linux with our MonoDevelop plugin for MeeGo.

If you are more of a Visual Studio developer, our upcoming MonoTools for Visual Studio 2.0 will also support developing applications for MeeGo from Windows.

I am blown away by the way that everyone involved in MeeGo has been able to execute on the vision of bringing Linux to the consumer space by the way of the netbook.

Kudos to everyone involved.

We are hard at work on MonoDroid -- Mono for Android -- and we have created a survey that will help us prioritize our tooling story and our binding story.

If you are interested in Monodroid and in participating on the beta program, please fill out our Monodroid survey.

Here is what you can expect from Mono on Android:

Like we did with MonoTouch, we will bring developers into the preview in batches of 150 developers, please enter enough information on the "comments" section if you want to be in the early batches.

In our Beta for MonoDevelop 2.4 we introduced a new feature designed to help developers better explore a new API.

Many developers use the IDE code-completion as a way of quickly navigate and explore an API. There is no need to flip through the documentation or Google for every possible issue, they start writing code and instantiating classes and the IDE offers completion for possible methods, properties and events to use as well as small text snippets describing what each completion does as well as parameter documentation:

With MonoTouch, we were dealing with a new type hierarchy, with new methods. We found that our users wanted to explore the API through code completion, but they wanted more context than just the full list of possible options at some point.

For example, the UIButton class has this hierarchy:

Looking through the methods, properties and events of this class can be confusing, as for the UIButton class there were some 140 possible completions that came from the complete hierarchy. Sometimes the user knows that the method they want is a button-specific method, and as fascinating as UIResponder, UIView or UIControl might be, the method they are looking for is not going to be there.

With MonoDevelop 2.4 we introduced a new shortcut during code completion that changes the completion order from alphabetic to grouped by type, with completions from the most derived type coming up first:

To switch between the modes you use Control-space when the popup is visible. You can use shift-up and shift-down to quickly move between the groups as well.

I have been using this feature extensively while exploring new APIs.

MonoDevelop 2.4 was a release in which we focused on improving the ergonomics of the IDE. We did this in dozens of places and we did this by dogfooding the IDE and comparing it to other tools and environments that we have been using.

With MonoDevelop 2.0 and earlier we used a dialog box like most other GUI applications from 2005. The dialog would remain on top of the text and the user would press next, and move the dialog box around as the matches were found.

In the current MonoDevelop (2.2) we adopted a more Firefox-like UI, this is what the search bar looks like: 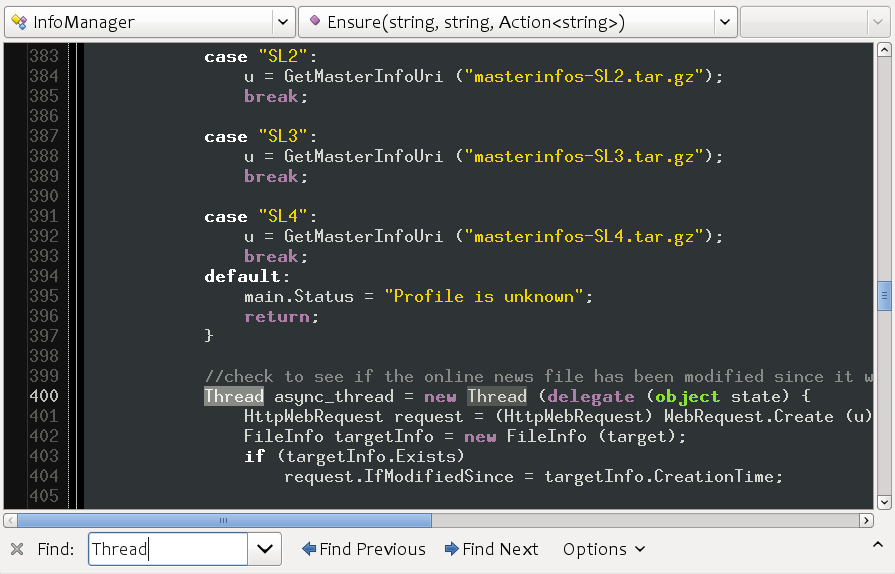 We have a relatively big bar at the bottom of the screen, big labels, a drop down for picking previously searched items and an options menu that would let users pick manually case sensitivity, whole world matching or toggling regular expressions.

This took too much space, in a prime location of screen real estate. Additionally, the features although present were hard to pick. You would start an incremental search with Control-f but if you wanted to change the settings, you would have to use the mouse to access the options menu. If you later changed your mind, you would have to change the defaults again.

With the new release of MonoDevelop (2.4) we have changed this again, this time adopting the Google Chrome search bar and done a few other usability changes: 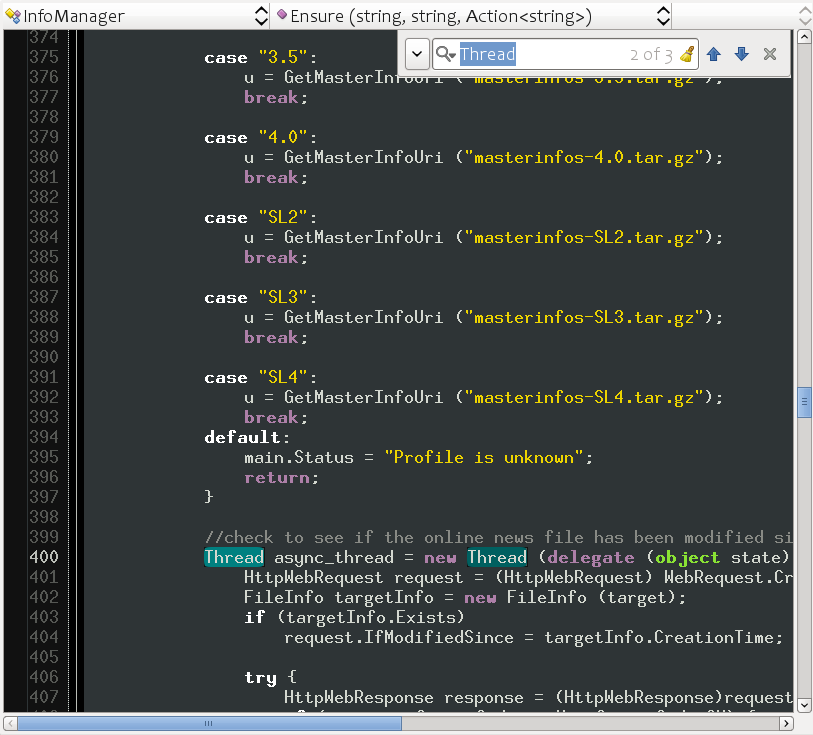 The first thing to notice is that instead of taking valuable horizontal space in the form of a full row, we now only take a corner of the screen, and we take it on the top right corner which is less likely to contain the information you are looking for as you search forward.

Case sensitivity searches now use the same model used by Emacs. If you start searching for a term and you type only lowercase letters, the search will be case insensitive.

And we also highlight matches like some Mac applications do, all matching words in the screen are highlighted, and the current match gets both a brighter color as well as a bubble that inflates and deflates on every match.

The replace functionality is built into this new UI, and is accessed either with a hotkey (Control-H) or by clicking on the left-side icon:

Just like Google Chrome, we use a watermark to show the number of matches in the document.

Jonathan Pobst has announced the release of Pinta 0.3: 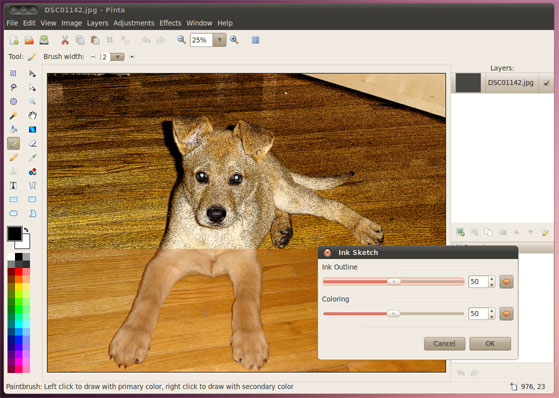 Pinta is a lightweight paint application for Linux, OSX and Windows written entirely in C# and using the Gtk# toolkit for its user interface. From the FAQ:

Is Pinta a Port of Paint.NET?

Not really, it's more of a clone. The interface is largely based off of Paint.NET, but most of the code is original. The only code directly used by Pinta is for the adjustments and effects, which is basically a straight copy from Paint.NET 3.0.

Regardless, we are very grateful that Paint.NET 3.0 was open sourced under the MIT license so we could use some of their awesome code.

Jonathan further adds that this release is very close to feature parity with the original Paint.NET.

CLI on the Web

In the last few days Joe Hewitt has been lamenting the state of client side web development technologies on twitter. TechCrunch covered the progress in their The State Of Web Development Ripped Apart In 25 Tweets By One Man.

Today Joe followed up with a brilliant point:

joehewitt: If CLI was the ECMA standard baked into browsers instead of ECMAScript we'd have a much more flexible web: http://bit.ly/sLILI

A wide variety of languages would have become first-class citizens on the web client. Today those languages can run, but they can run in plugin islands. They can run inside Flash or they can run inside Silverlight, but they are second class citizens: they run on separate VMs, and they are constrained on how they talk to the browser with very limited APIs (only some 20 or so entry points exist to integrate the browser with a plugin, and most advance interoperability scenarios require extensive hacks and knowing about a browser internal).

Such an effort would have two goals:

We could do this by linking Mono directly into the browser. This would allow developers to write code like this:

Or pulling the source from the server:

We could replace `csharp' with any of the existing open sourced compilers (C#, IronPython, IronRuby and others).

Or alternatively, if users did not want to distribute their source and instead ship a compact binary to the end users, they could embed the binary CIL directly:

Pre-emptive answer to the "view-source" crowd: you can use .NET Reflector to look at the source code of a compiled binary. If it is obfuscated, you will enjoy reading that as much as you would enjoy reading any Javascript in the real web.

Embedding the CIL on the browser would create isolated execution environments for each page (AppDomain in ECMA parlance) and sandbox the execution system.

The security model exposed by Silverlight exposes exactly what is needed to go beyond a language-neutral runtime. The security model distinguishes between untrusted code which is subject to verification, strict requirements on what it can do and limits what they can do from "platform" code that is trusted.

Trusted platform code is granted special permissions that untrusted code is not given. The runtime enforces that no untrusted code can call into any security sensitive and protected areas.

This would allow browser vendor to expose new APIs that get full access to the underlying operating system (for example getting direct access to special hardware on the system like microphones and camera) while enforcing that the user code accesses them only through safe gateways.

This is very important to allow developers to try out new trusted APIs: new UI models, rendering systems and APIs built entirely on the same core.

I am absolutely fascinated by the idea and I only regret not having come up with it. We have been too focused on the Moonlight-as-a-plugin to take a step back and think in more general terms: how can we use the ECMA CIL engine for *all* applications without a browser plugin.

Joe like many of us is conflicted between the power of reach that the web has versus the polish and speed that native GUI toolkits deliver.

Althought Silverlight provides a nice UI system inside the plugin, Joe's point is that we need a platform in which we can more quickly innovate new UI ideas, and probably completely different new ideas quickly. And with the ECMA sandbox model we can start testing new ideas without waiting for browser vendors to add the features themselves and we can make the integration between these plugins and the browser stronger than they have ever been.

The plugin model does not provide the necessary tools to drive more innovation in the web. We need a new model, and I am ready to start prototyping Joe's idea.

The only question is what browser to target first Firefox or Chrome.

Gestalt allows developers to use the CLI inside the browser and it shows what can be done with other languages in the browsers. It requires Silverlight to run and the interaction between the code and the browser is limited in the level of integration that can be achieved via the browser-plugin interface.

This solves only the half the problem: multi-languages and does it in a limited way.

You can learn more about the security model in my previous blog post.