Update: I have updated this post addressing some questions that people have raised over email and the group. The updates are flagged with an Update label.

Update: Scott Guthrie at Microsoft blogs about the news: updates to Silverlight 1.1, organizations adopting Silverlight 1.0 and links to various tutorials.

Our implementation of Silverlight is Moonlight.

We have had a cordial relationship with many developers at Microsoft for quite some time. Scott Guthrie and Jason Zander provided us with informal advice on how to implement Moonlight, and we also have good relations with the open source teams working on IronPython and IronRuby.

Today we are formalizing a collaboration between Microsoft and Novell with the explicit purpose of bringing Silverlight to Linux and do this in a fully supported way. The highlights of this collaboration include:

This is an historical collaboration between an open source project and Microsoft. They have collaborated with other folks on the server space (Xen and PHP) but this is their first direct contribution to the open source desktop.

Microsoft benefits by making Silverlight reach the Linux and BSD spaces. We benefit by ensuring that users of open source operating systems get access to sites that adopt Silverlight to deliver content or spice up their web apps.

[1] Currently Moonlight video support has been prototyped using the fabulous and LGPLed ffmpeg engine for video and audio. We are unable to redistribute this code commercially due to licensing conflicts. Update: This means that individuals that want to use a 100% pure free software setup can do so. We are unable to redistribute this edition though.

The binary codecs will initially support x86 and x86-64, with other platforms supported on an as-needed basis. Update: The full list of codecs supported in Silverlight 1.0 are listed here (scroll down a bit).

Update: Some comments indicate that people would like to use GStreamer as the media backend (as GStreamer already has licensed codecs and some people might have purchased them already). We would be glad to merge any patches that people send us (copyright assignment required) to add support for GStreamer.

Update: Some folks are asking whether they could use OGG for the video rendering in Moonlight. Today this is already possible because the media engine we use to prototype is ffmpeg which has support for this. From the standpoint of a desktop developer this might be enough, but for the web, the problem becomes an issue of compatibility with the Microsoft Silverlight implementation.

We will bring up with Microsoft the issue of adding a new codec, but I suspect that since they are pressed to minimize the download size this might be difficult. There are other competing codecs though that people on the Silverlight groups are fairly vocal about and my eclipse our request. If you want official Ogg support from Microsoft, please bring this up on the Silverlight.net forums, Microsoft does listen to user feedback.

Update: There are two versions of Silverlight. The version released today (1.0) is basically a canvas that can be programmed through the browser's Javascript engine. ie, you can use "View Source" on your browser to see how everything is done.

The upcoming version (1.1, a year from now) extends the browser plugin with a embedded CLR runtime. This is what got us in the Mono team interested in the technology was precisely this.

Moonlight was originally designed to only implement 1.1, and only later we noticed that it was forwards compatible with 1.0 and that we could deliver both 1.0 and 1.1.

For developing 1.0 applications the only tool you need is either a text editor or a programming language that supports the "print" command. Designers are useful, but not mandatory (on Windows Blend supports Silverlight, and there might be others). We are building an open source designer ourselves for using on Linux.

If you want to take advantage of the features in 1.1, you will most likely want a .NET compiler and the Silverlight 1.1 libraries to link against. Our next release of Mono (1.2.6) contains a C# 3.0 compiler as well as the Silverlight 1.1 libraries that you can use to target Silverlight 1.1 using Mono on your favorite OS. Of course, with this setup you lose the ability to "View Source" as it now features compiled code in binary form (although if you really want to, you can just use Lutz's Reflector to look at it).

Today our plugin depends on Mono on both cases (1.0 and 1.1), but we are exploring our options to remove Mono from the 1.0 case as it would simplify our profiling and valgrinding of our C++ runtime (valgrinding Mozilla + Mono + Moonlight + a web site is a bit slow).

Working Well With Others

We will be supporting Firefox and Linux initially (that is our first goal).

But we are looking forward to work with developers from other operating systems (BSD, Solaris) and other browser (Konqueror, WebKit and Opera) to ensure that Moonlight works fine on their systems.

Getting this collaboration in place took a lot of work on both ends: both the business and legal teams in both companies as well as various people inside Microsoft that endorsed the idea of having an independent implementation of Silverlight endorsed by Microsoft.

Special thanks to Bob Muglia at Microsoft and Jeff Jaffe at Novell for getting the official collaboration rolling.

Scott Guthrie, Bill Hilf and many members of his team that are transforming Microsoft from the inside out and have championed approaching the open source community. Brian Goldfarb made sure that the clock ticked and we got the agreement in place and Marc Jalabert invited us to demo Moonlight at the Paris ReMIX, which led to our 21-day hackathon. And everyone that has so kindly answered our questions on .NET and Silverlight and have championed us from the inside.

In the Novell side, Frank Rego, Denzil Harris, Patrick McBride and Guy Lunardi worked around the clock to get everything in place for this launch.

And of course, none of this would be possible without all the members of the Mono team that made our original proof-of-concept possible on June 21st and that have continued to work on all the various pieces that make up Moonlight possible.

Oh, by the way

If you are a talented software developer with experience in C#, C++, graphics, fonts, audio, Mozilla, Opera, WebKit, QA, packaging or Gtk+ and you do not mind intense and grueling hours of work to produce something millions of people will see and use, send me an email.

Interviews with the Mono team are usually conducted over email and usually include a complicated and completely useless programming exercise that you complete at home.

If you are attending the IBC2007 conference in Amsterdam you will be able to see Moonlight in action at the Microsoft booth. Hacker extraordinaire Rolf Bjarne (of Mono's VisualBasic.NET fame) will be demonstrating Moonlight running on Linux at the show.

Alternatively, if you want to try out Moonlight yourself, you will need to follow the instructions on our Moonlight page. It currently requires users to compile code from our Subversion repository, we will try to put together in the next few weeks a VirtualBox/VMware image for people to try it out easily.

If you try it out, please report bugs here.

Recently we have been fine tuning Mono to render the Halo3 site: 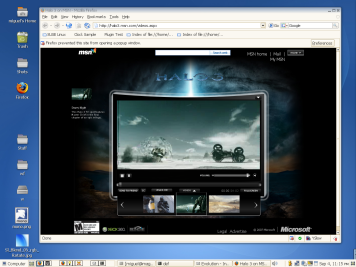 You can see more screenshots of Moonlight in action here.