MonoTools 2 for VisualStudio has been released

There are four main features in MonoTools 2:

Thanks to everyone that participated on our beta program for all of the bug reports and feedback!

MonoTools is the foundation on which we are building the upcoming Mono for Android toolchain.

With the introduction of MonoTools for Visual Studio, we are also moving our long-term maintenance Mono release from the Mono 2.4 release to Mono 2.6, the release that we announced last week.

Download our betas from this page. On Windows, you would install our plugin for either 2008 or 2010 and you need to install Mono 2.6.5 on the target platform (Windows, Linux or MacOS).

On Linux, run `monotools-gui-server' or `monotools-server', this will let Visual Studio connect to your machine. Then proceed from Windows.

On MacOS, double click on the "MonoTools Server" application.

Once you run those, MonoTools will automatically show you the servers on your network that you can deploy to or debug: 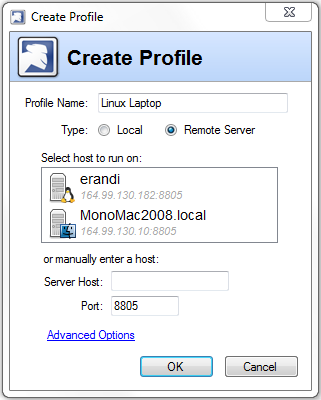 ASP.NET debugging with this is a joy!

This release is the first one that uses our new soft debugger. With is a more portable engine to debug that will allow our users to debug targets other than Linux/x86 for example OSX and Windows.

This is the engine that we use on MonoTouch and that we are using for Mono on Android.

Our previous debugger, a hard debugger, worked on Linux/x86 systems but was very hard to port to new platforms and to other operating systems. With our new soft debugger we can debug Mono applications running on Windows, helping developers test before moving to Linux.

When you are developing large applications or web applications, you want your turn around time from the time that you run hit Run to the site running on Linux to be as short as possible.

Cheap Shot Alert: When dealing with large web sites, we used to behave like J2EE: click run and wait for a month for your app to be loaded into the application server.

This is no longer the case. Deployments that used to take 30 seconds now take 2 seconds.

This means you get a single .vsix package to install, no system installs, no registry messing around, no dedicated installers, none of that.

The full plugin installs in 3 seconds. And you can remove it just as easily.

Then you can just from VS's Mono menu pick "Run In Mono" and pick whether you want to run locally or remotely.

We now also support multiple profiles, so you can debug from Visual Studio your code running on Linux boxes, Mac boxes or your local system.

MonoTools was our first Windows software and we learned a lot about what Windows developers expected.

We polished hundreds of small usability problems that the community reported in our last few iterations. You can also check our release notes for the meaty details.

And we integrate directly with SuseStudio to create your ready-to-run appliances directly from Visual Studio.