Mono has always been developed on mailing lists like pretty much every other classic open source project. But many of our younger or migrating users are more used to Web-based forums and have always wanted to have a forum-like interface for the Mono mailing lists.

Thomas Wiest and Joseph Hill have just finished the integration Nabble into the Mono web site. Now people can access all of the Mono mailing lists with a Forums UI. 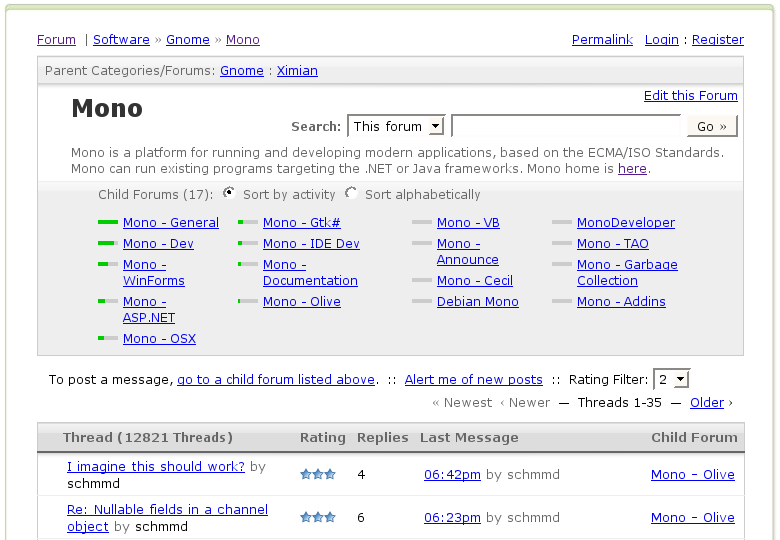 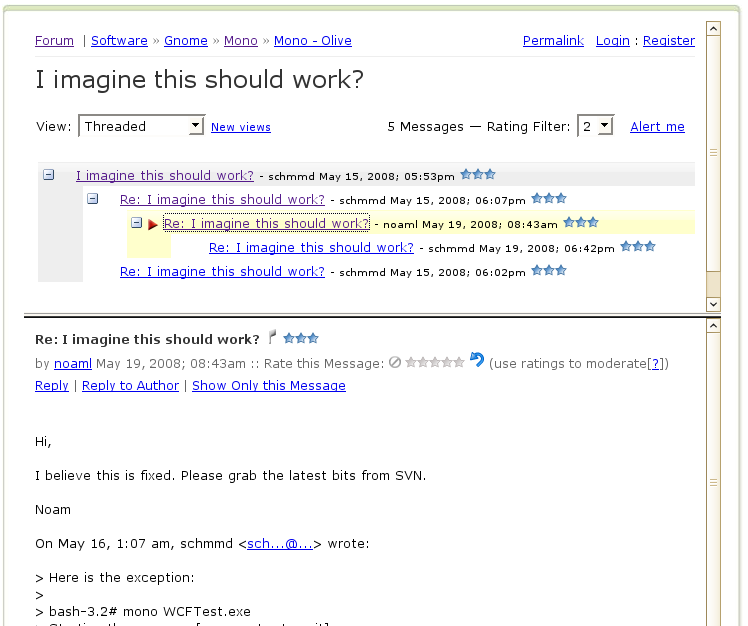 Silverlight's 2.0 deployment model changed significantly from the 1.1 alpha model. In the past you would load a XAML file, and then on demand load any managed libraries referenced from the XAML file before parsing could continue.

With Silverlight 2.0 the model has changed. One of the downsides is that now you deploy things as a ZIP file with a manifest file which feels obnoxious. On the upside, the loop "try-to-parse-or-keep-requesting-files-from-the-browser-until-all-dependencies-are-downloaded" is now gone. Now you get a zip file asynchronously, unpack it, load all the assemblies in the zip file, create an instance of the class specified as the entry point, and off you go. No more latency.

This hopefully also solves an obnoxious pattern that was common in 1.1: calling createFromXaml from Javascript could hang execution while Moonlight waited for the browser to fetch a missing assembly.

This corresponds to the standard template with the content of the user control set to a TextBlock.

There are some peculiar patterns in Silverlight 2.0 instantiation model. Instead of creating objects from a XAML description, an object of a known-type is first created, and then the object is initialized from a XAML file. Your object is supposed to call LoadComponent ("my-xaml-definition") to initialize itself.

As you might know, I do not consider myself a gamer although I now understand the Penny Arcade cartoon.

I have done my best in the past year to increasing BestBuy and Game Stop share holder value by dumping thousands of dollars in my quest to be entertained by video games.

The games that I actuall enjoyed playing are very few:

I continue to refuse to play propaganda games and do not enjoy sport games, racing games or fantasy games. I could not get into the games in the Orange Box, even if everyone loves it (Portal was ok). And I have not tried Rock Band or Guitar Hero because I do not want to have a drumset ont he living room.

I guess I like games that have a developing story and are not very repetitive.

Is there anything like Bioshock on the game pipeline?

A few months ago, am not sure how, but Nat talked me into getting a widescreen laptop. I no longer remember what were the touted benefits of it, but this warpig of a machine is both buggy and heavy.

Since the warpig is just too heavy to carry home every day (and also requires a base station hooked up to high-def output to stay at 2.4 GHz of speed) I just leave it at work and use my five year old computer at home to surf the internets. When I bought the machine I remember distinctively describing it to friends as "a silent computer". Five years later every time I load a new web page the fans make as much noise as the construction site across the street. Was I deaf back then, or did the fans become dirty and loud?

I am a fan of Google IG, and recently I discovered that they have a tiny IDE that you can add to your Google IG page. So I decided to try to write a Silverlight Sudoku application entirely using that tiny editor in my old computer at home: 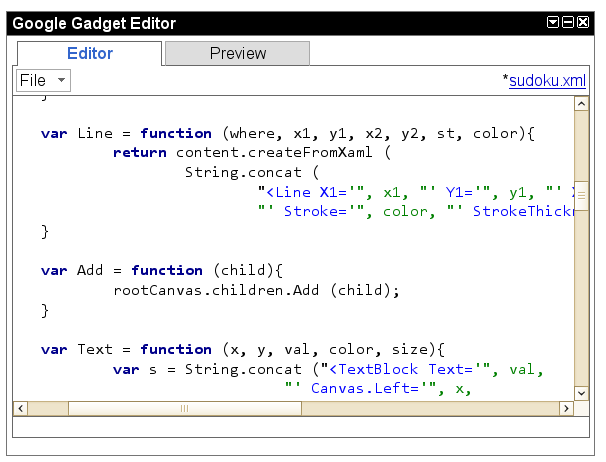 I actually cheated a little and used Emacs here and there every once in a while.

But I ended up with this cute Sudoku/Silverlight application that has exactly one puzzle:

I am very proud of my one-puzzle Sudoku because it has some of the features that I like from Big Bang's Sudoku (click to flag, double click to set the value, hints) and some cute and simple animations that I wrote in xaml and shows my allegiance to the clean and simple configuration religion: 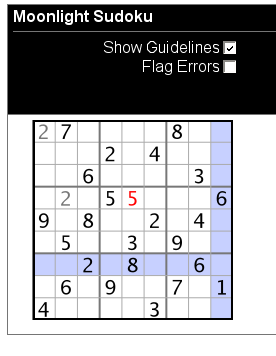 I published it on IG as "Moonlight Sudoku". To add it to your IG home page, go here and click "Add to Google".

Now the only problem with it is that it seems to work just fine with Firefox but seems to have problems with IE and Safari. I must be doing something wrong with Javascript, but I have no idea what it could be. If you can find the bug, let me know so I can make it work on other browser.

My toy sudoku only has one puzzle, this is clearly a design decision to prevent people from becoming addicted to Moonlight Sudoku. But if you know of a source of http-fetchable Sudoku puzzles, let me know, as I might want to revisit this design decision to include more puzzles.

You can download the self-contained module (ig + html + xaml + js) from here. You might also need the Silverlight.js file.

In clear violation of David Mamet's advise to the aspiring actor, I am now going to act surprised:

In other news, Firefox 3 RC1 came out, and the release notes have nothing to say about the bugs that prevent Silverlight from working with it.

Larry Ewing pointed this out.

You can use these packages to check some videos at channel9 or see the dual-stream updated videos from Mix 08. Keep us posted about bugs and limitations.

Today we are making the first public release of Moonlight, supporting the Silverlight 1.0 profile for Linux. The release comes in two forms:

Update: I apologize for the confussion; This is not Moonlight 1.0, this is the first source code release that we are making of Moonlight for interested contributors and developers. This release is not even a Beta release, as we are not yet feature complete (missing components in media codecs, the media pipeline, as well as fixing about 70 known bugs). Apologies for any confussion.

Although Moonlight works on Firefox 2 and Firefox 3, recent changes in Firefox 3 prevent Silverlight and Moonlight from working (For details see #432371, #430965). There is a user contributed Greasemonkey script that will work around this bug for some sites (requires Greasemonkey).

Windowless: Moonlight supports "windowless" mode, a mechanism that allows Silverlight content to blend with other HTML ements on a page. This is only supported by Firefox 3, users of older versions of Firefox might run into Silverlight applications and web sites that do not work correctly as many Silverlight applications depend on this functionality (Flash sites have the same problem with Firefox 2).

1.1 and 2.0 support: This release only supports the Silverlight 1.0 profile. The 1.1 support is no longer maintained and the release happened at the time when we are transitioning the APIs to 2.0.

If you find bugs, please file them for us to fix.

Jonathan Pobst has posted the update on our Windows.Forms 2.0 work.

Some interesting points from his blog entry:

Winforms 2.0 was the last piece of code holding off the Mono 2.0 release. We anticipate that there will be bugs, so we want to encourage folks to submit their bug reports and to evaluate the portability of their sofwtare using our Mono Migration Analyzer tool.

Congratulations to the Winforms team, and everyone that provided bug reports, test cases, contributed code, tested and worked with us to bring it to where it is today.

Unlike my proposal for standalone Silverlight Applications that is currently Moonlight-specific (and currently limited to Linux/X11) this approach works on Windows with .NET and with Linux using Mono and Moonlight:

In addition to hosting the WebControl for hosting Silverlight, a thread is running to dispatch http requests locally using HttpListener. HttpListener is an embeddable HTTP server that is part of the class libraries, and exposes a very limited API. You can host ASP.NET with HttpListener by doing the bindings by hand, or you could use our Mono.WebServer library (part of our XSP/mod_mono distribution) to allow your applications to have a fully hosted ASP.NET server.

Mono.WebServer is what iFolder uses to embed the ASP.NET server to expose SOAP-based WebServices to clients.

Of course, this currently does not work on MacOS X as we do have no implementation of WebControl for Windows.Forms on OSX, something that a contributor might want to look into.

You can get the source for the sample from Tamir's page.

We are looking for consultants to work on a six to nine month project at Novell to write a prototype for a Visual Studio addin in C# or C++ that will connect Visual Studio and its debugging infrastructure to a remote Linux machine running Mono and the Mono Debugger.

If you are interested in working with us in this project, you must have good C# and C++ skills, experience with networking and protocol design, knowledge of COM and assembly language programming are pluses.

We are looking to bring two consultants for the duration of this project. If you are interested, please click this link and attach your resume, pointers to some existing projects of yours and so on.